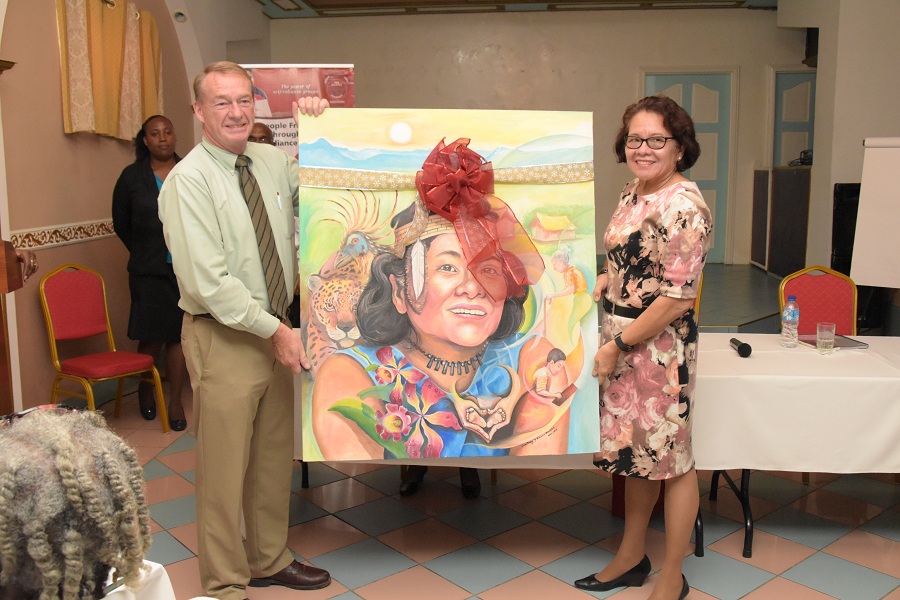 Georgetown, Guyana (November 10, 2017) First Lady, Mrs. Sandra Granger, today, expressed her desire to see the graduates of the Training of Trainers Self-Reliance and Success in Business Workshop become leaders in their communities. She voiced this expectation to the 32 participants who successfully completed the one-week workshop at the Regency Suites, Hadfield Street, Georgetown.

“These workshops, I hope, will not only help you financially… but will also give you ways to develop your own family structure, and, of course, be more active in your community… I hope that you’ve understood that underlying all this training is the idea that you can be a leader in your community… I hope that, at the end of this workshop, we would have set you on the path of thinking how you can be someone who can help to build your own communities and help [them] develop,” she said.

Delivering the feature address, Minister of Public Health, Ms. Volda Lawrence urged the graduates to embrace the confidence that their newfound knowledge affords them. “I want you to understand what you were given. Don’t take it for granted. You have been given power… I hope that when you leave this place… your head will be lifted a little higher, that your chest would be lifted to a higher place, [and] that your shoulders will be straight. I want to tell you that unless you know who you are… you will not be able to use the power that you have been given here. When you’re walking out of here, you’re walking out with power… and that power… can make you anything you want to be,” she said.

Minister Lawrence also explained that the workshop helps to promote President David Granger’s dream for the people of Guyana. “I have a President, and he has a dream… He wants to place power in the hands of Guyanese…And his vision is that Guyanese would position themselves with knowledge which will ensure that they can establish their businesses and government will buy the services from them and at the same time, you hold your independence,” she said.

Executive Director of Interweave Solutions International, Dr. Lynn Curtis said that, with the training of the new facilitators, the Self-Reliance programme can reach thousands of Guyanese. “This was so significant. It’s actually historical… Now some of the brightest and the best from each of those regions have come here and they have been trained… It’s really going to touch thousands of lives in Guyana. It’s really the start of something very exciting,” he said.

Dr. Curtis, who had been working with the trainees for most of the week, explained that there is a tangible sense of empowerment in the room. “First of all, you feel it. You feel this excitement, this sense of confidence, this sense of discovery at finding something new in oneself…People feel good about themselves. They have hope for solving their own problems…They have hope for [partnering] with others to help others solve their problems… That is their power; the power to change your own life and help change the lives of those you care about. ,” he said.

Sophia graduate, Ms. Rohilda Glasgow, during her first Self-Reliance workshop, presented her community plan, entitled the Green Life Flora, to build a greenhouse in which community members can grow fruits, vegetables, and flowering plants. Impressed with the plan, the Ministry of Social Protection agreed to fund Ms. Glasgow’s greenhouse project. Ms. Rohilda commented on the drive the workshop gave her. “I’m a retiree… This workshop, [motivated] me to do something more instead of just sitting round… to assist the youth in the community to get active… [The workshop] empowers [women] to help more in the community. When we start… we encourage other women to… uplift their lifestyle,” she said. Ms. Glasgow’s said the project is still in the early stages, but is coming along nicely.

Sole male participant at this workshop, Mr. Jaswick Hope, commented on the uniqueness of working alongside female business owners. “You know, the males can’t do without the females…They got brains. They were thinking along some lines that I didn’t even [consider]… I encourage my male counterparts to get involved,” he said.

The ceremony, which featured poetic and musical performances, closed the first of two Training of Trainers programmes being held in the month of November. The second workshop will be conducted from November 13-17 and will host participants from Demerara-Mahaica (Region Four), Mahaica-Berbice (Region Five), East Berbice-Corentyne (Region Six), and Upper Demerara-Berbice (Region Ten).

“…Be relevant in this modern world” -First Lady to ICT graduates