Georgetown, Guyana – (June 3, 2017) President David Granger said that with a strong public-private sector partnership, tourism in Guyana can be developed into a competitive world-class industry. This, he said, would require increased investment, innovation, improved infrastructure and the penetration of international markets. “Investment is needed to convert this natural wealth into a world-class product. Investments will originate, largely, from the private sector. Tourism is a private-sector driven industry and has a pivotal role to play in ensuring this country’s economic development,” the Head of State said. He made these remarks, this evening, at the President’s Awards 2017 organised by the Tourism and Hospitality Association of Guyana (THAG) at the Marriott Hotel.

The President explained that huge craters in the country’s national parks will outrage international opinion and repel tourists. Fishes will die in turbid rivers, birds will migrate and animals will run away to greener frontiers if their habitats are destroyed by cutting down too many trees. This, he said, is one of the many reasons why the ‘green’ development agenda is important now more than ever. “Guyana’s future is ‘green’. We are on the path to building a ‘green state’, one which will promote harmony between humanity and the habitat of our rich fauna,” he said.

In terms of infrastructure, the Head of State said that the Government will continue to support tourism development by improving aerodromes, bridges, ferries, highways and stellings. He said that the Government, right now, is unlocking the country’s ecotourism potential by improving communications in the hinterland where the ecotourism product is largely located and to which, access is mainly by air and river. He also informed that the Protected Areas System will be expanded and extended countrywide so that every region will have at least one legally-designated, regional protected area.

President David Granger and THAG’s President Ms. Andrea de Caires examining some of the wooden crafts that were displayed at the cocktail reception and artisan exhibit before the commencement of the ceremony

“Our country is unique. We must be proud of this precious patrimony, which we inherited from our fore-parents. We can derive great profits from sustainable eco-tourism without damaging or destroying this blessed place. We are mere trustees of our ancestors’ legacy. We must bequeath it to our children and grandchildren, mustn’t we?” the President asked.

He also made mention of the importance of international marketing to tourism development and said that while this could be costly, it will pay big dividends. He assured stakeholders in the tourism sector that his Government will continue to provide resources, within its means, to promote the country as a desirable destination for the world’s tourists.

“Guyana is being internationally branded as a ‘green’ state. I am selling Guyana as ‘green’ state wherever I go. I see ecotourism development as pillar of our ‘green’ economy. It is pivotal to economic diversification and to the creation of sustainable employment for thousands of young people leaving school every year…Our huge diaspora, has been our most generous customer of our culture. The diaspora is a faithful tourist market. Its annual pilgrimages to national festivals such as Mashramani, Emancipation, the Regatta, the Rodeo and ‘town-days’ should not be underrated,” President Granger said. 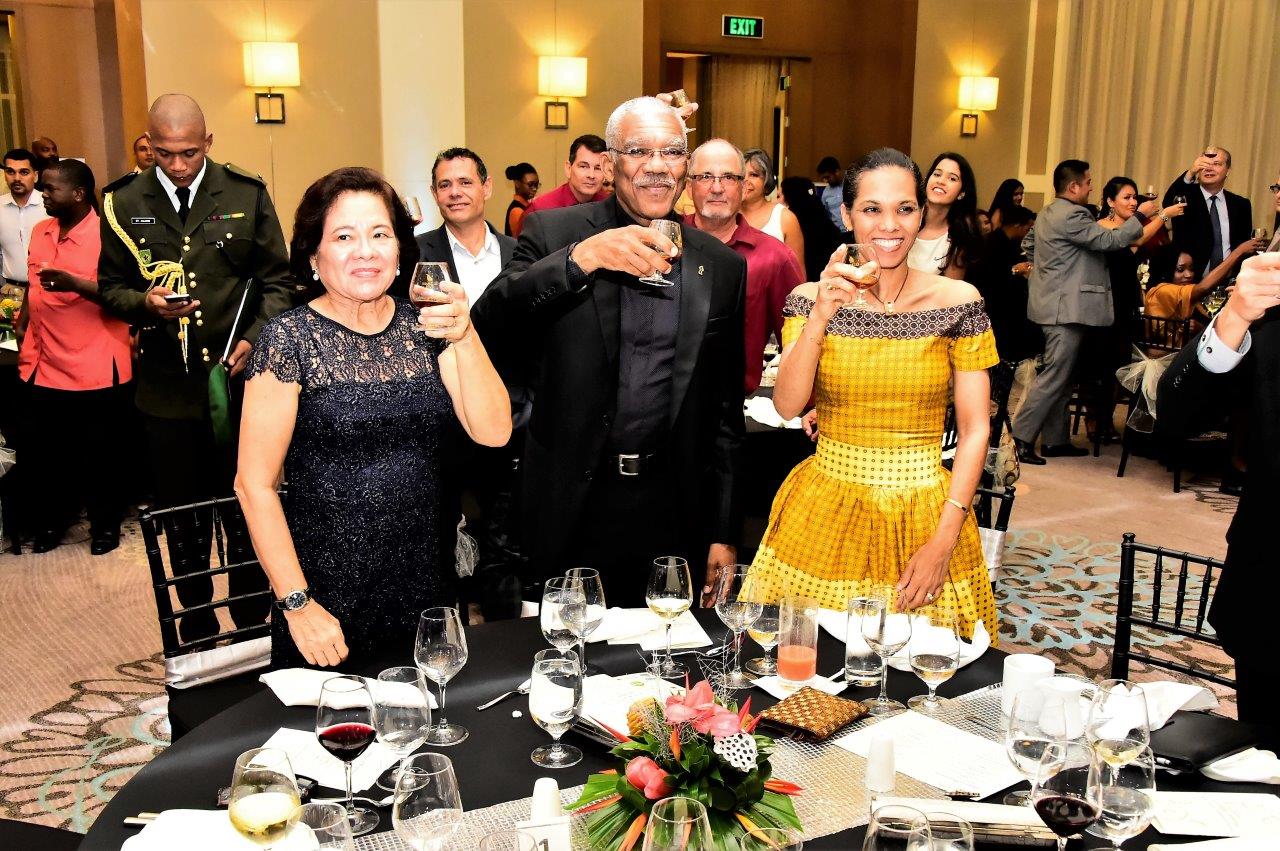 Meanwhile, Minister of Business with responsibility for Tourism, Mr. Dominic Gaskin, in his remarks informed the gathering that last year, a total of 235,000 visitors arrived in Guyana, a 17 per cent increase over the previous year and so far for the first quarter of 2017, a six per cent increase was recorded compared to the same period in 2016.

He also informed that the Department of Tourism within the Ministry of Business has begun conducting tourism planning workshops in every region to enhance the collective understanding of the role that tourism can play in regional development and to identify visitor hotspots that can serve as hubs for a viable industry. The Regional Democratic Councils are the focal points for these engagements and the local hospitality providers and other key stakeholders are included.

“THAG is a major stakeholder and one that will also be engaged, specifically on hinterland tourism and how the product can be brought to a state of readiness in a way that is inclusiveness and provide economic benefits for the people of those regions. I am confident in THAG, I am confident in Guyana’s tourism industry and I am confident that our government is the right Government for tourism in Guyana,” Minister Gaskin said. 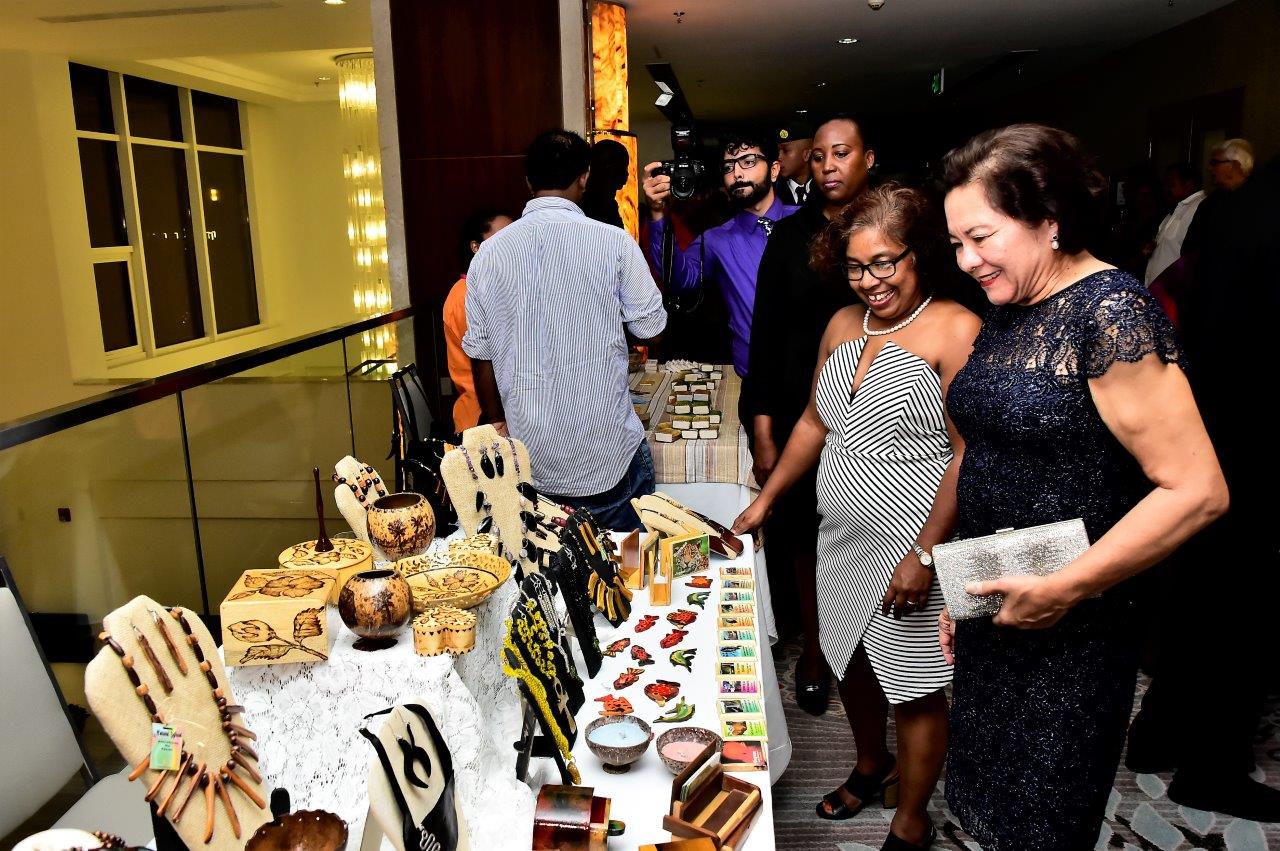 First Lady, Mrs. Sandra Granger seems quite taken by the craftsmanship shown in these locally-made ornaments

THAG is celebrating 25 years of existence. Its President, Ms. Andrea de Caires said that the Association’s objective is to market Guyana to the world. She said that while many can argue tourism’s contribution to the Gross Domestic Product (GDP), the fact is that the sector has now become significant.

“The growth of both diaspora and eco-tourism types of tourism have increased substantially in the last decade. Guyana’s name is out there in the international community. Guyana has won major awards internationally,” she said.

THAG is an umbrella body for associate, tourism and hospitality operations including, accommodation facilities, hotels and interior resorts, restaurants, tour operators, tour guides, domestic and international air carriers, bars, transportation providers, travel agencies, tourism consultants and gift and craft shops. It was established in January 6, 1992 by a group of individuals who were willing to pool their resources and skills to promote the development of a Tourism industry in Guyana.