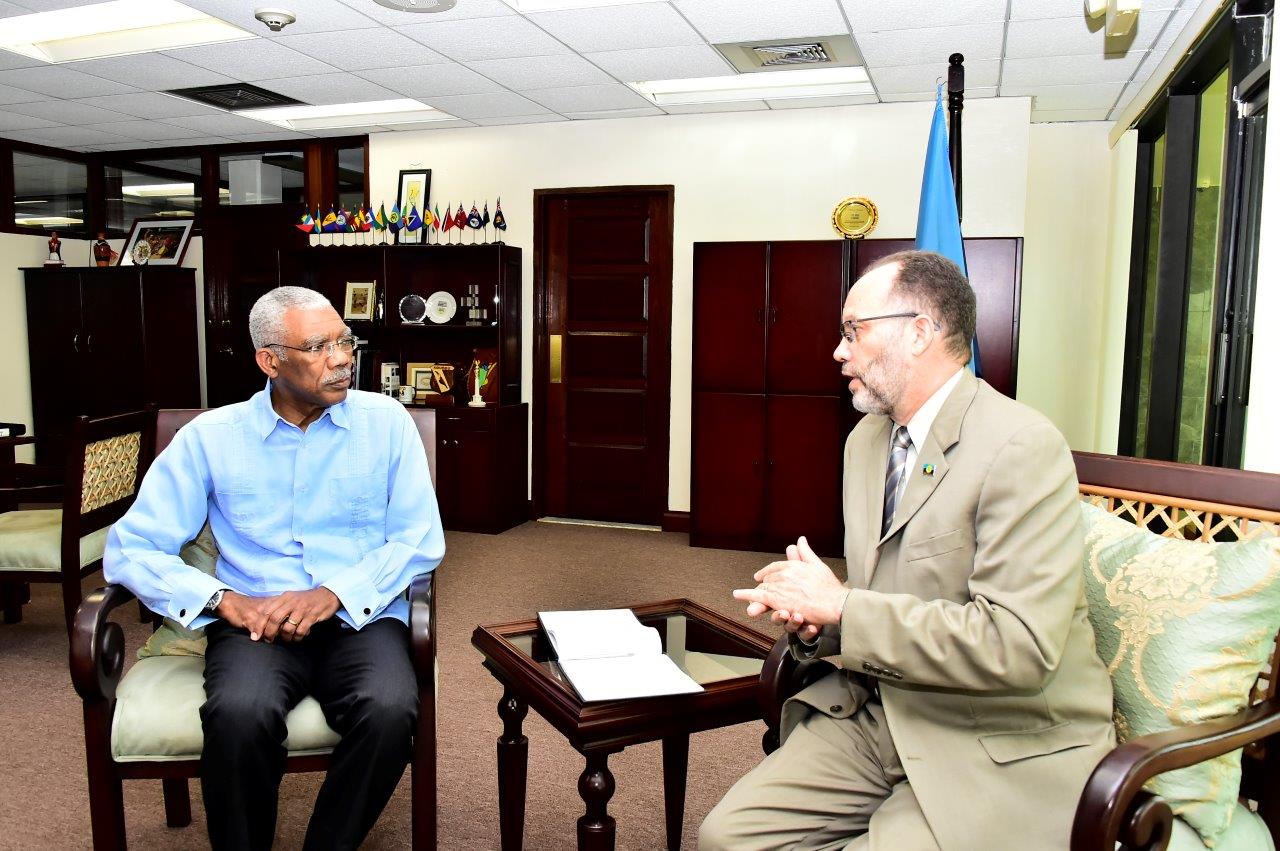 Georgetown, Guyana – (May 26, 2017) President David Granger, today, visited the Caribbean Community (CARICOM) Secretariat at Liliendaal, where he chaired a video conference meeting of the Bureau of the Conference of Heads of Government (HOG), ahead of their July meeting in Grenada. The Bureau is a Sub-Committee of the Conference comprising the incoming Chairman, Prime Minister Keith Mitchell of Grenada, immediate past Chairman, Prime Minister Roosevelt Skerrit of Dominica and current Chairman of the Conference, President Granger. They were joined at the open meeting by a number of other States, including Prime Minister Andrew Holness of Jamaica and Prime Minister Gaston Browne of Antigua, as well as the Minister of Foreign Affairs of Guyana, Mr. Carl Greenidge and Secretary General of CARICOM, Ambassador Irwin LaRocque.

In an invited comment, Minister Greenidge said that the meeting of the Bureau functioned as sort of a preparatory meeting for the HOG Conference. “The purpose of the meeting, in a sense, is to flag early for the CARICOM Heads, issues that may need their attention, so that when they arrive at the meeting, not only would they have seen an agenda or annotations, but they would be up to date with some events, which may be moving quickly between now and that time,” he said. This meeting also comes ahead of the Community Council of Ministers meeting, which will be held next Monday in Guyana to determine the provisional agenda of the HOG meeting.

Among the likely agenda items at the HOG meeting are the advancement of the CARICOM Single Market and Economy (CSME), security, renewable energy, reparations and in health; Non-Communicable Diseases, in foreign policy; border issues and future trade relations with the United Kingdom in the post Brexit era.

Ambassador LaRocque, also speaking after the meeting, said that CARICOM remains a strong and unified body. He said that the meeting of the Bureau is one of the mechanisms that help to strengthen coordination and responsiveness among member states.

“Anytime you’re discussing a matter, whether it is something you agree on or something you don’t agree on and you’re able to sit around a table and have discussions, in a frank manner, in a manner that allows for all the views to be aired in a respectful manner, that, in itself, is strength. We’re not talking at each other across a table. We’re talking around a table and it serves only to strengthen it. The Foreign Ministers met in Barbados last week and also they have made a determination that there must be more frequent, informal interactions. The Bureau is operational. I suspect you’re going to see something every similar being, very soon, operationalised in the context of the Foreign Ministers,” he said.

The Secretary General added that the regional body boasts Heads of Government, who are committed to the maintenance of the strength of the Community. He said, “One of the recurring themes of the Heads, whenever they meet, is the preservation of the CARICOM unity; the preservation of the CARICOM brand; the value of the CARICOM brand internationally, obviously regionally, but internationally as well, and the cohesion of such a brand and the recognition that the more we work together as small states in a huge world is the more we will get and succeed in what we want to get.”

Having learnt that he will be a recipient of a National Award announced today, Independence Day in Guyana, Ambassador LaRocque said he felt honoured to be recognised for his work and shares that honour with his team at the Secretariat. “It is a significant and tremendous honour to have received, well I haven’t received the award, but I learned of the announcement that I have been selected among a few persons for recognition of the work that is being done on behalf of the Community here in Guyana. I have been in Guyana now for many, many years so it is a distinct honour,” he said.