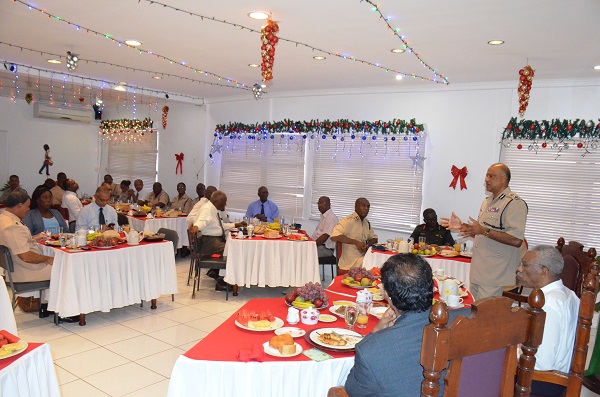 Georgetown, Guyana – (December 14, 2016) President David Granger, today, expressed his confidence in the ability of the Guyana Police Force (GPF) to tackle crime and discharge its mandate of service and protection to the people of Guyana but noted limited resources and the unpredictable nature of some crimes, which plague the society as challenges that they face in the execution of their duties. The Head of State was at the time, speaking to Force’s top brass at its annual Christmas breakfast at Eve Leary. Minister of Public Security, Mr. Khemraj Ramjattan was also in attendance.

The Head of State said that through the National Security Committee (NSC), which meets on a weekly basis, the Administration ensures that it remains engaged at all times with the Force and added that Government remains committed to the development of a better equipped and more effective GPF over time. “We do not criticise; we sit and discuss how best we can resolve these issues,” he said.

The President also commended the Commissioner of Police, Mr. Seelall Persaud, who, in addition to implementing enforcement measures and advancing the recommendations by the NSC, has embarked on a range of social programmes, in order to reach out to communities to improve relationships with the Force and positively impact the country’s youth. President Granger explained that crime is not just about career crooks and professional law enforcement officers. It is also about society and the conditions under which people live. In this regard, he said that “the Force has shown that it is responsive to the changes of the society.”

Police Commissioner, Mr. Seelall Persaud giving a brief overview of some of the Force’s activities over the past year

He urged the management of the GPF to continue to engage citizens, particularly youths and work with them to ensure that they are deterred from any form of criminal behaviour. He noted that in some cases where youths drop out of school at the age of 13 and 14, they fall prey to negative influences to the point where they do not recognise any form of authority and that it is the men and women in uniform, who have to deal with the consequences.

Emphasising the importance of community support for the work of the GPF and their role in supporting crime prevention, the President also called on citizens to work with the police, noting the unpredictable nature of certain crimes and the fact that it is impossible for police officers to be every where at the same time. “The police force faces the greatest burden of all on the streets in terms of traffic and most of all, interpersonal violence, which is impossible to predict,” he said.

Turning to the officers, the President thanked them for their service over the past 11 months and said that even as Government continues to use available resources to ensure that the GPF can adequately perform their duties that public security will improve over time.

“We are interested in a safe country and we will continue to work with you. We are very grateful to you for the sacrifices you make… You face criticisms every day and you get some of criticisms, which you do not deserve, but I would like to assure you on the part of the Government, we will continue to support the police so that we can make Guyana a safe place. I am confident that in years to come things will get better,” President Granger said. 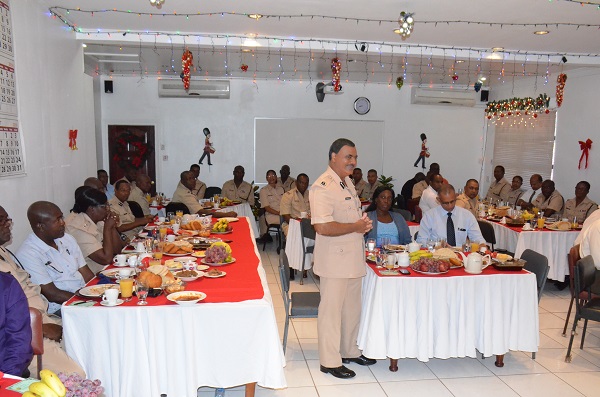 Meanwhile, Commissioner Persaud said that every year brings its own challenges and that the Force is aware that much more needs to be done and this is why it is focusing heavily on enhancing its relations with the public with a view to improving crime intelligence and other vital reforms.

“We are dealing with the millennial generation… We have to find a way of communicating with them and to share our experiences with them; to develop ways in which that will help them to take care of their own security and make good judgements,” the Commissioner said.

Speaking on the most recent crime statistics, which showed a 16 percent reduction in serious crimes at the end of November compared to the corresponding period last year, Commissioner said that while progress has been made, there is much more work to be done. According to that report, the Force also seized 96 unlicensed firearms; 42 pistols, 28 revolvers, 24 shotguns and two rifles. With regard to the traffic department, there was an 11 percent increase in fatal accidents with 115 fatalities at the end of November, compared to 112 for the same period last year.

This Christmas breakfast is a traditional year-end activity, which brings together all of the divisional commanders, assistant commissioners, department heads and retired police officers to interact with the Commander-in-Chief and reflect on the year. It also serves to boost morale and build camaraderie in the Force.