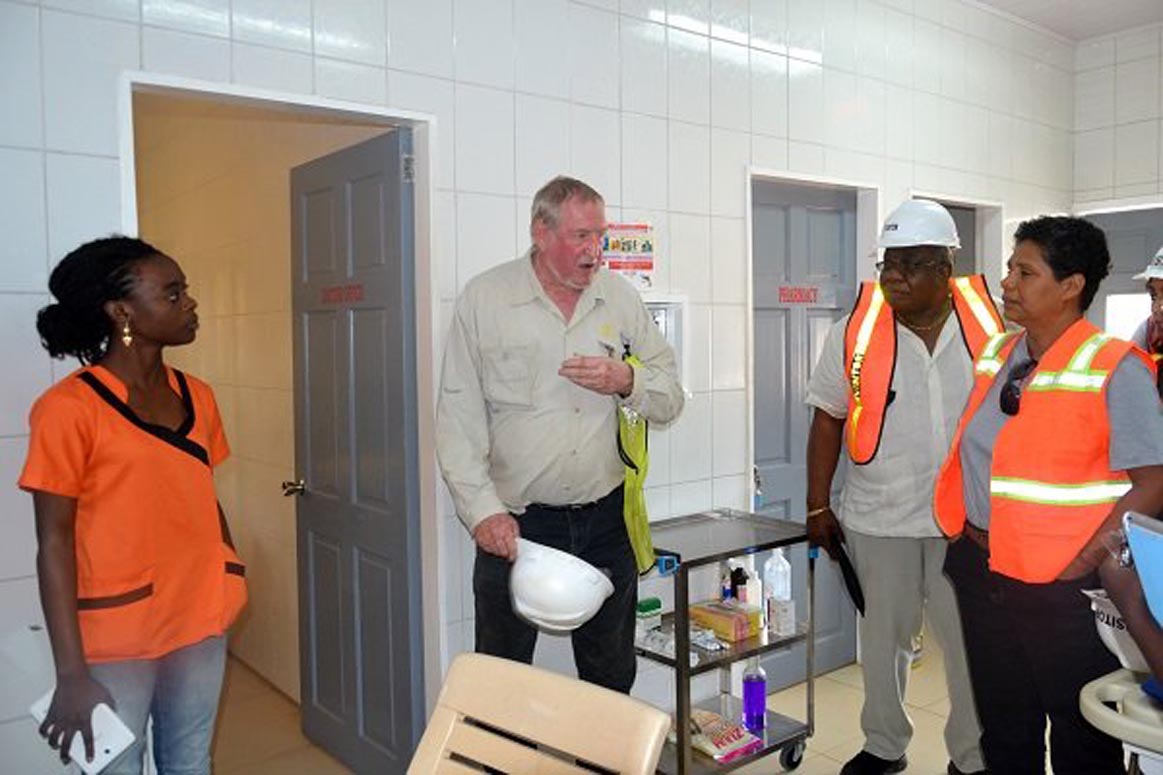 Georgetown, Guyana – (November 06, 2015) A team from the Guyana Geology and Mines Commission (GGMC), yesterday visited the Troy Resources Karouni Gold Project in Region Seven, to ensure that the tenets of the Mineral Agreement, which was signed in 2014 are being upheld.

The team, which was headed by Chairman of the GGMC Board of Directors, Clinton Williams, included Head of the Guyana Gold Board (GGB), Lisaveta Ramotar, Secretary of the GGMC Board, Jacques Foster, Technical Officer- Mining, Department of Natural Resources and the Environment (NRE), Euileen Watson and former President of the Guyana Gold and Diamond Miners’ Association (GGDM), Patrick Harding.

The team was briefed on the status of the project by Executive Director – Project Development, Ken Nilsson before given a full tour of the Karouni operations.

Executive Director – Project Development, Ken Nilsson describing the benefits derived from the Company’s Health Centre to Chairman of the GGMC, Clinton Williams and Euileen Watson, Technical Officer- Mining, Department of Natural Resources and the Environment as a staff look on.

Chairman of the GGMC Board, Clinton Williams explained that the visit and tour was organised for the GGMC to see firsthand, whether the corporate, social and other responsibilities to which the company had agreed in the 2014 agreement, were achieved.

“We had signed a Mineral Agreement last year with Troy Resources for them to produce gold in commercial quantities. The intention was that Guyana would benefit in many ways. First of all, it was ensuring that we get foreign exchange, that we get employment for our people and that we would have a transfer of technology. With this particular agreement, we emphasised that we needed to increase their corporate social responsibilities and they agreed to these commitments,” the Chairman said. 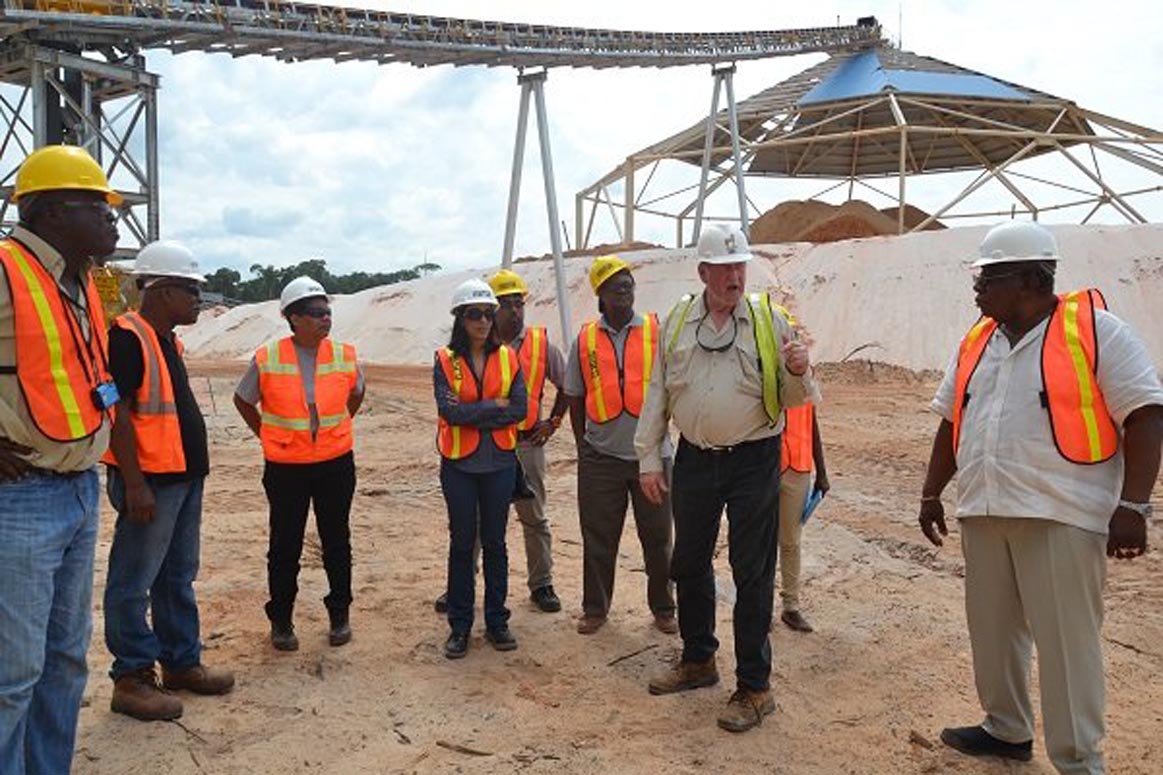 Executive Director – Project Development, Ken Nilsson showing off one part of the company’s Karouni Gold Project site to the team that visited yesterday.

According to Williams’ observations, the company has outdone itself in fulfilling its obligations as agreed to in the Mineral Agreement.

“I’m pleased to tell you that what I have seen and heard today…. They told me they were able to employ 96 percent of Guyanese for their overall workforce. They have made contractors and other skilled persons into entrepreneurs; they provide sewing machines to the surrounding indigenous communities and then commissioned them to sew their curtains and soon, their uniforms, and they are also looking to encourage the communities to partake in agriculture so that they can purchase their vegetables from them instead of Georgetown,” Williams disclosed.
The operations at Karouni currently host a medical unit which is manned by a Doctor and provides medical services to not only the staff of the mine but also to miners in the area and the nearby Amerindian communities.
In an effort to transfer technical knowledge and boost the capacity of locals, the company has embarked on a training programme to train staff in the operation of the mine. Upon completion of the training, staff will be certified and this will ensure that they have the necessary paperwork to support their skills.

More importantly is the commitment made by the company to work with the Commission and the Government of Guyana to develop technology, which can help small and medium scale miners to improve their gold recoveries and reduce the use of mercury in the recovery process. “Small and medium scale miners usually have a gold recovery rate of approximately 40-50 percent but with the introduction of new technologies and processing methods, these can be vastly improved,” he explained.

The company has sought the services of an expatriate who is currently working with staff and the Safety and Health personnel to elevate the level of Occupational Health and Safety practices and norms to that of international standards.

The Chairman further noted that the Troy Resources operations, coupled with the Guyana Goldfields/ Aurora Gold Project; two major international companies; will ensure that the total receipts from gold production and sales remain within the targeted 400,000 ounces per year, despite the fluctuation in gold prices.

While he noted that the company will probably take an additional three months to launch full scale operations, Nilsson said that they are accelerating preparations to pour the first gold bar in about two weeks.

Troy Resources had proposed a medium-scale gold mine designed to produce up to 110,000 ounces of gold per annum based on an average overall recovery of 92% at the Black Water Creek, Kaburi Area, in Region Seven. The mine will be focused on the recovery of ore for processing from Smarts and Hicks gold deposits. The project components include an open cut mine, processing plant, tailings storage facility, mine site accommodation and additional infrastructure required to recover and to process ore for the recovery of gold. 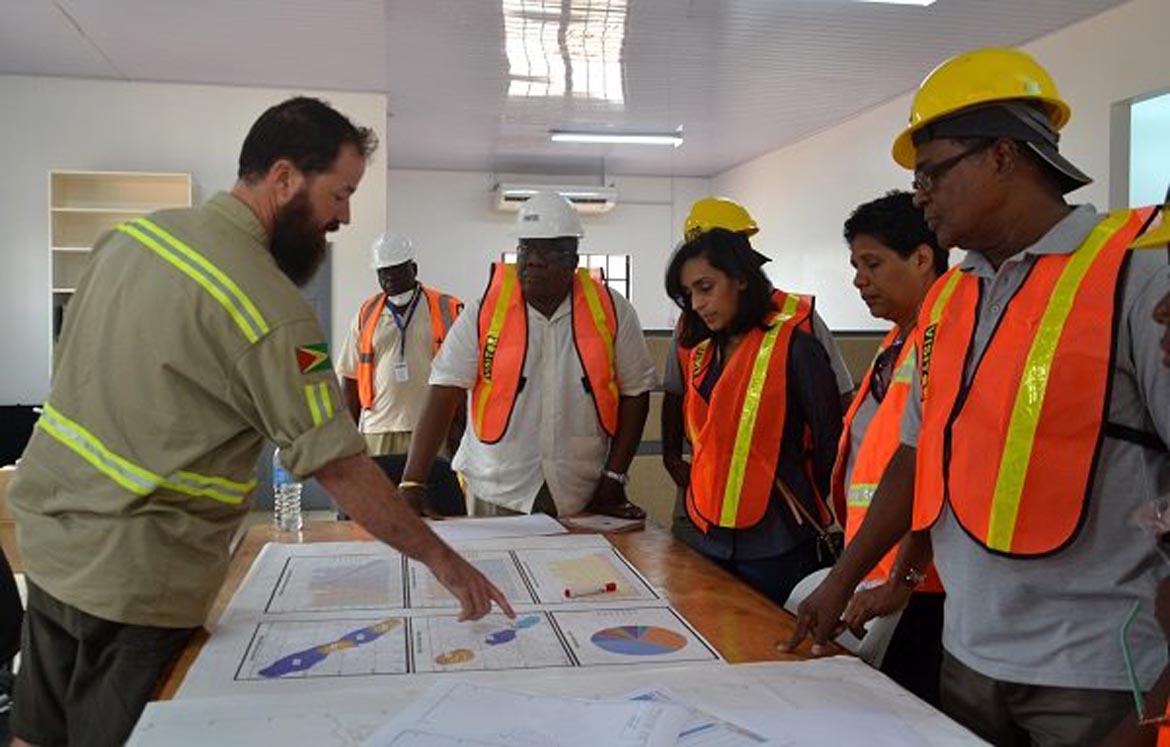 The logistics of the Mining Operations being explained to the team (from left)- Clinton Williams, Chairman, GGMC, Lisaveta Ramotar, Head, Guyana Gold Board, Technical Officer- Mining, Department of Natural Resources and the Environment and Patrick Harding, former President of the Guyana Gold and Diamond Miners’ Association (GGDMA)

Bill to implement tobacco control policies to be laid in Parliament