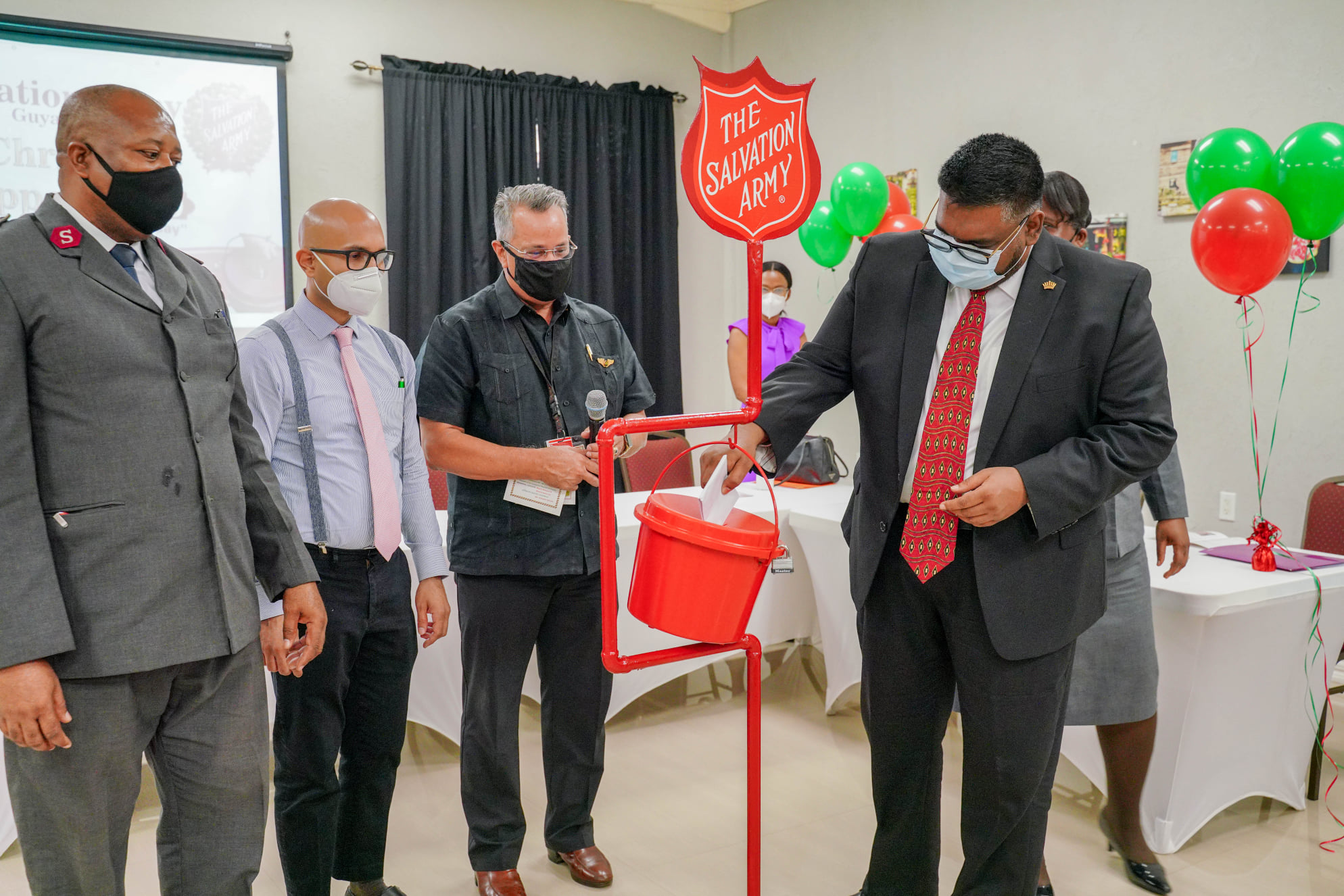 Georgetown, Guyana- (October 30, 2020) His Excellency Dr Irfaan Ali today praised the humanitarian efforts of the Salvation Army during the launch of the annual Christmas Kettle Appeal at Duke Lodge, Kingston.

President Ali officially started the Christmas appeal by making the first deposit into the kettle.

The Head of State was joined by the Minister of Tourism, Industry and Commerce, the Hon. Oneidge Walrond, National Security Advisor (NSA), Captain Jerry Gouveia, Chairman of the Private Sector Commission, Mr. Nicholas Boyer and representatives from the Salvation Army.

President Ali added that in Guyana the Salvation Army restores hope when it is lost. He also pointed to the far reaching benefits of the international charitable organisation, including its drug rehabilitation programme.

“I remember very clearly at a restaurant in Guyana, the restaurant manager came up to former President Jagdeo and he said thank you, I am a product for the resources that were given to the Salvation Army in the rehabilitation programme.”

The Head of State reiterated his Government’s commitment towards supporting such programmes while he pointed to the need for the services to be decentralised to benefit more communities.

He also urged all Guyanese to see the merits of giving beyond the Christmas season and pointed to the need for long term solutions.

“As we move forward, I pray that our lives will continue to be blessed, all Guyanese families here and in the diaspora be blessed with goodness and mercy and that our act of kindness will not only be rewarded with the blessings that come with it but it will be rewarded by the transformation of lives, the delivery of hope and the opening up of opportunities.”

In her remarks, Minister Walrond also recognised the spirit of selfless giving and love which the Salvation Army embodies. She also commended them for their continued service to the less fortunate as well as the benefits of the drug rehabilitation programme.

Minister Walrond called to attention the significance of the Salvation Army’s work, particularly in the midst of the COVID-19 Pandemic.

She also encouraged the business community and all Guyanese to “give generously”.

Mr. Gouveia in his remarks, outlined the parallel responsibility of the NSA and the Salvation Army in waging war against poverty and making lives better.

Mr. Nicholas Boyer represented his father, Mr.  Edward ‘Eddie’ Boyer, who is the Chairman of the Salvation Army’s Advisory Board.

With the launch, Guyanese will now be greeted with the familiar sight of the red donation bucket. The annual Christmas Appeal helps to meet the needs of those less fortunate through the provision of food, shelter, rehabilitation and much more.

The launch of Amerindian Heritage Month 2020