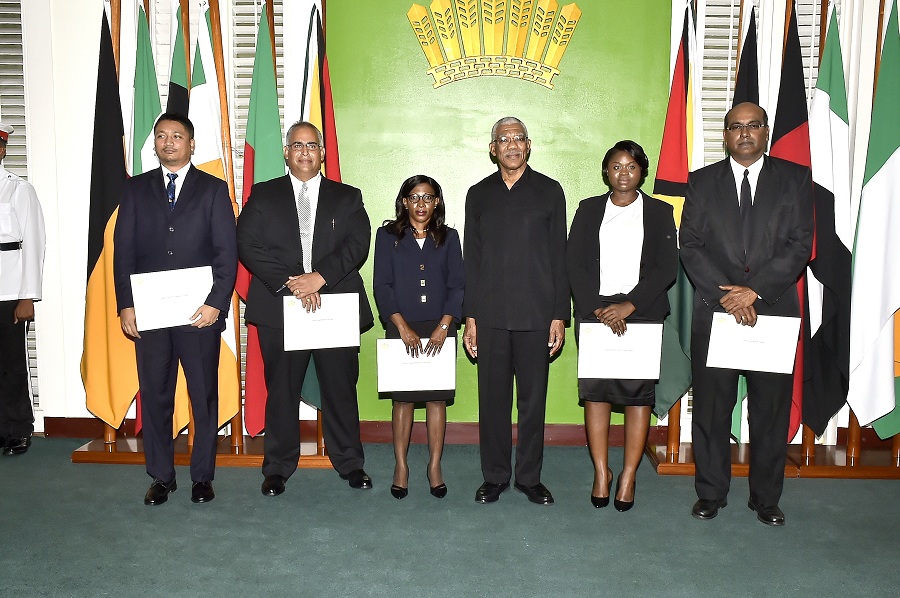 Georgetown, Guyana – (July 19, 2017) President David Granger has called on the judiciary to continue to exemplify the standards of excellence for which local judicial officers have become respected around the world. He said that the judiciary must remain unbiased, unblemished and unbribable in keeping with Article 122A (1) of the Constitution. The Head of State made these remarks today at State House where he administered the Oath of Office to four new Puisne judges and a Justice of Appeal. The Puisne judges are Ms. Damone Younge, Mr. Sandil Kissoon, Ms. Simone Morris-Ramlall and Mr. Gino Persaud, while Justice Deo Rishi Persaud was sworn-in as Justice of Appeal.

“The Executive Branch of Government has no interest in interfering in the adjudicatory role of the judiciary nor will it condone any interference in the work of the judiciary. Threats to the independence of the judiciary must be repelled… Judges are expected to be exemplars of high moral standards and personal propriety,” the President said.

He noted that while the Government is committed to filling vacancies within the judicial system, it expects that all recommendations for appointments will be based on merit. “We do not dictate, who should be appointed. However, we expect these recommendations will emerge from a dispassionate and objective process,” he said.

Mr. Gino Persaud, in a brief comment, said that he is honoured to have been recommended by Judicial Service Commission (JSC) and that he looks forward to this new phase of his career. “I have always been interested in fairness and ensuring that justice is served and I intend to hold to the highest quality of fairness and standards,” he said. Similar sentiments were expressed by Mr. Sandil Kissoon, who said that his priority as a Puisne Judge will be to uphold and defend the Constitution at all times and to ensure that every person who appears before him is given his or her due according to the law.

Article 128 (1) of Guyana’s Constitution states that “The judges, other than the Chancellor and Chief Justice, shall be appointed by the President, who shall act in accordance with the advice of the Judicial Service Commission”.