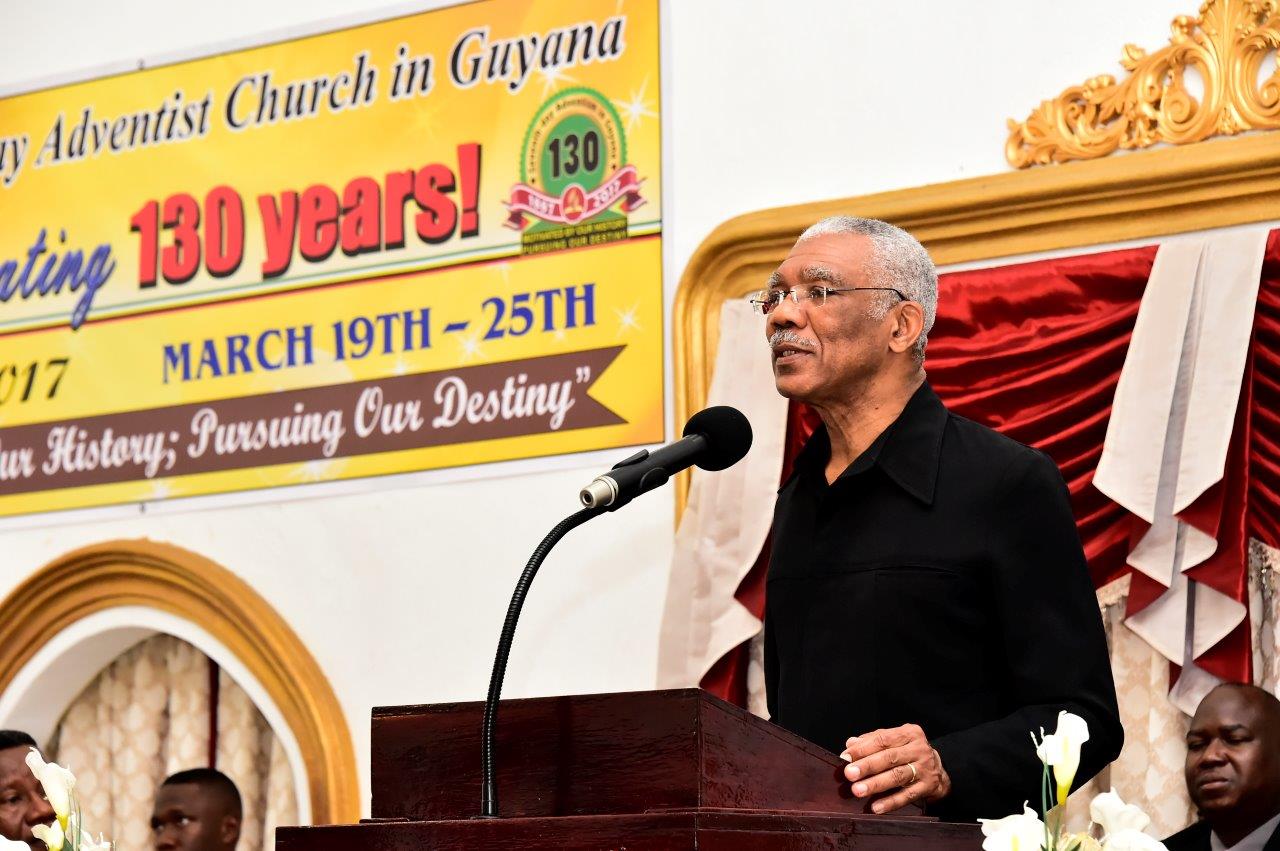 Georgetown, Guyana – (March 19, 2017) President David Granger, today, attended the rededication service of the refurbished Central Seventh-day Adventist (SDA) Church. This event is also part of the activities organised to commemorate the 130th anniversary of Seventh-day Adventism in Guyana. The Head of State congratulated the Guyana Conference of Seventh-day Adventists and took the opportunity to urge the church to work to help strengthen the institution of the family by ensuring that men recognise and understand their responsibilities and that women are treated as equals.

“Men must provide for their children, they must become the cornerstones of happy homes. Men can help to raise happy families by showing respect and responsibility towards their wives and their children… The church is essential to social cohesion and improving family-hood and it can do so by reinforcing the mainstays of fatherhood,” the President said.

Turning to husbands and fathers, he made an impassioned plea for them to recognise and respect the equality of women and to become more conscious of conduct; reminding them of how actions such as abandoning their children can lead to a complete collapse of the family and consequently, the society. “The family is cradle of live; the citadel of safety and the classroom of the culture of loving, sharing and forgiving… fatherhood and motherhood play complementary roles in family-hood. Happy families are the foundation of a happy nation. Happy families will lead to happy communities; happy communities will lead to strong regions and strong regions will build a strong nation,” he said.

Speaking of the church and its doctrine, the President said that the determination and dedication of its pioneers over the past 130 years have made Adventism one the leading Christian denominations in Guyana. He reminded that Adventism is part of the Protestant movement, which began some 500 years ago. 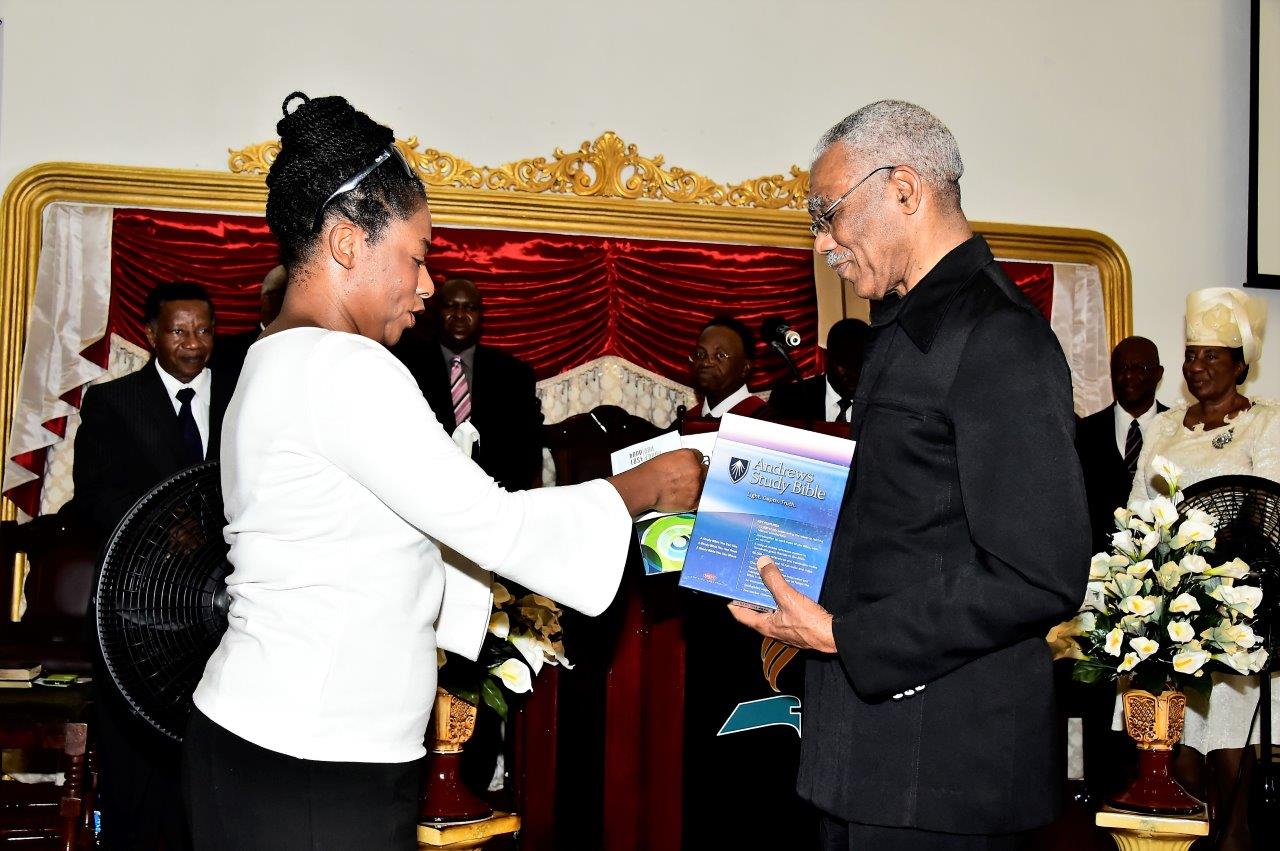 President David Granger being presented with a copy of the Andrews Study Bible by Deputy Vice Chancellor of the University of Guyana, Dr. Barbara Reynolds

From as early as 1883, that International Tract and Missionary Society began dispatching religious literature to British Guiana and within the first 25 years of the introduction of Adventism, five churches were established with Central SDA being the first in 1887. Today, there are a total of 216 SDA churches countrywide. “The success of the Guyana Conference of Seventh-day Adventists is attributable to its reputation, not only of preaching the word but also by practice of good works,” President Granger said.

Meanwhile, President of the Guyana Conference of the SDA, Pastor Richard James commended the Head of State for his unwavering efforts to unify Guyanese. “We would like the President to know that we are praying that he will continue to keep the torch of unity and integration burning brilliantly in this dear land of Guyana,” he said.

Starting with the establishment of the Ministry of Social Cohesion, the Government’s policy to improve race relations and to bring about greater equality among all Guyanese has not only received overwhelming stakeholder support but is also gaining traction as people are becoming more involved in the wider conversation on national unity. Only last Thursday, Guyanese from the 10 Administrative Regions were engaged in discussions at a workshop on Social Cohesion Strategic Plan 2017-2021, which will essentially serve as the roadmap to bridging the existing gaps in the diverse Guyanese society. 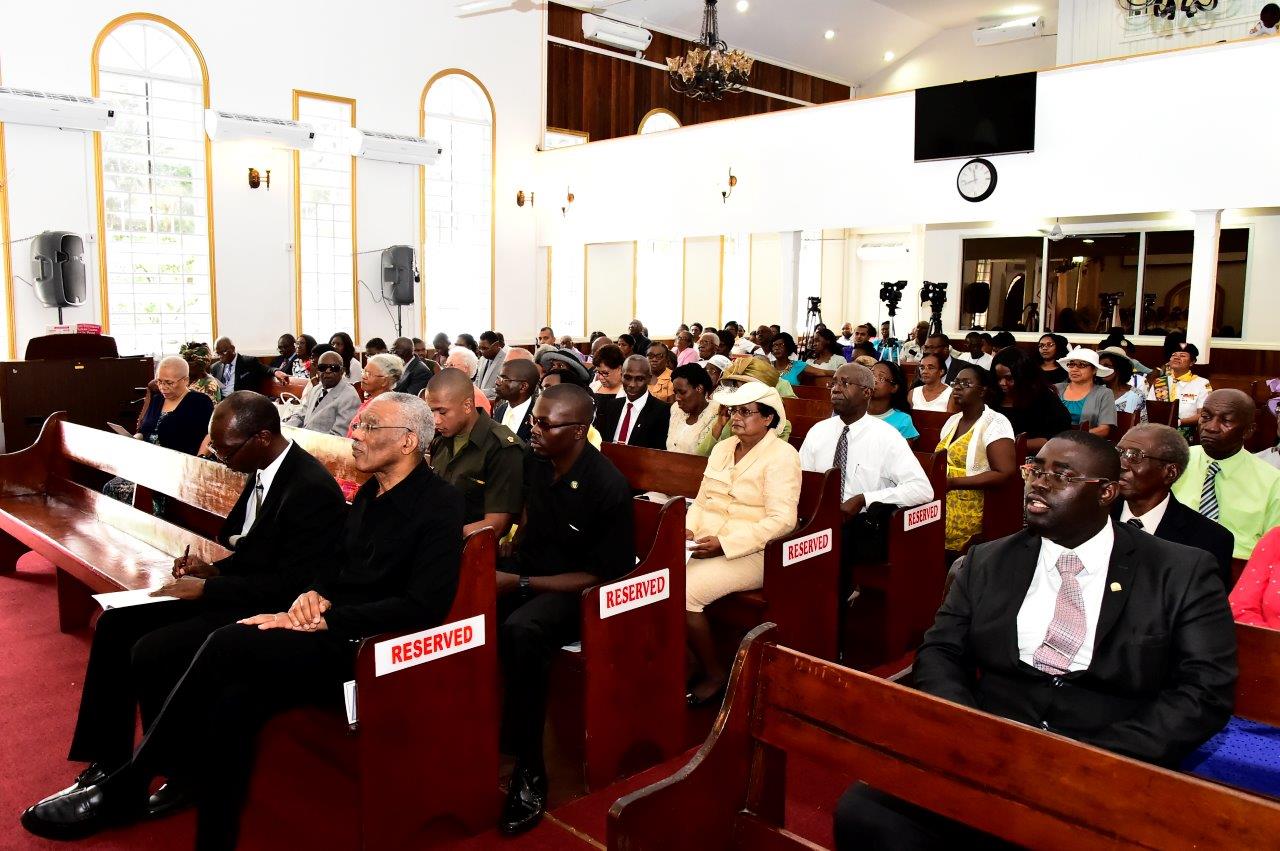 President David Granger and President of the Guyana Conference of SDA, Pastor Richard James seated in the audience at the re-dedication service

Office of Climate Change spearheads ‘green’ agenda sessions in Schools -Regions 4, 5, 6 and 10 to benefit in first quarter of 2017