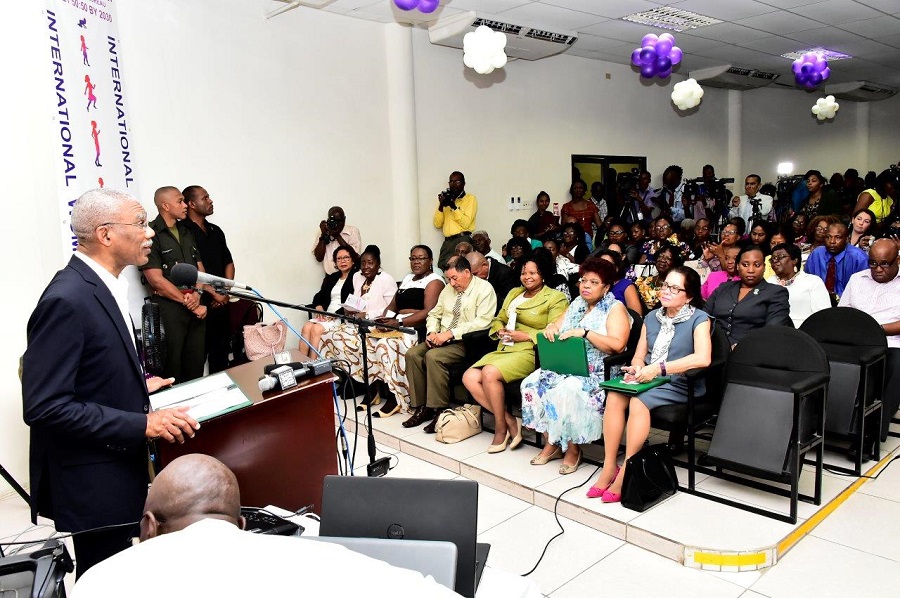 Georgetown, Guyana – (March 8, 2017) Since taking Office almost two years ago, President David Granger has made significant strides to not only bring to the fore the challenges facing Guyanese women but to also recognise their contributions to national development. He has appointed women to leadership positions including at the helm of the Judiciary, conferred more National Awards to women than any of his predecessors and made history, when he appointed three women as Senior Counsels. All of this is in addition to the legislation and policies that were promulgated with the aim of advancing the women of Guyana economically, politically and socially. However, the President said that while these achievements are all noteworthy, the country must now move to dismantle the structural impediments to gender equality in order to fulfil its commitment under the United Nations Sustainable Development Goals (SDGs).

The President made these remarks today during his address at the at the International Women’s Day (IWD) observance, which was held at the Police Officers’ Training Centre and organised by the Ministry of Social Protection. First Lady, Mrs. Sandra Granger and several Government ministers were also present. This year, IWD is being celebrated under the United Nations theme, “Women in the Changing World of Work: Planet 50-50 by 2030.”

One of the 17 SDGs (Goal No.5) seeks to achieve gender equality and empower all women and girls and President Granger assured that Guyana will honour its commitment to empower women and educate and protect girls. In this regard, he outlined four key areas that must be addressed. These are: empowerment, education, employment and gender equality. “Gender parity cannot be achieved in the absence of a more equal society. Enforcement of legislation to protect women, to prevent abuse and to promote greater equality must be more robust. The disparities between hinterland and coastland and between rural and urban communities, for example, must be reduced,” the Head of State said.

He explained that equal access to education is the surest way through which women will be provided with greater opportunities for upward mobility. Equally important, is the issue of employment; noting that poor people produce poor children, who in turn, produce more poor children. “It is a vicious cycle of ‘hereditary poverty.’ The burden of poverty falls heavily on women. The vicious cycle of poverty has to be broken in order to create a virtuous cycle of gender equality. Jobs are necessary to enable poor women to enjoy sustainable incomes and to have a chance of at exiting poverty,” the President explained. 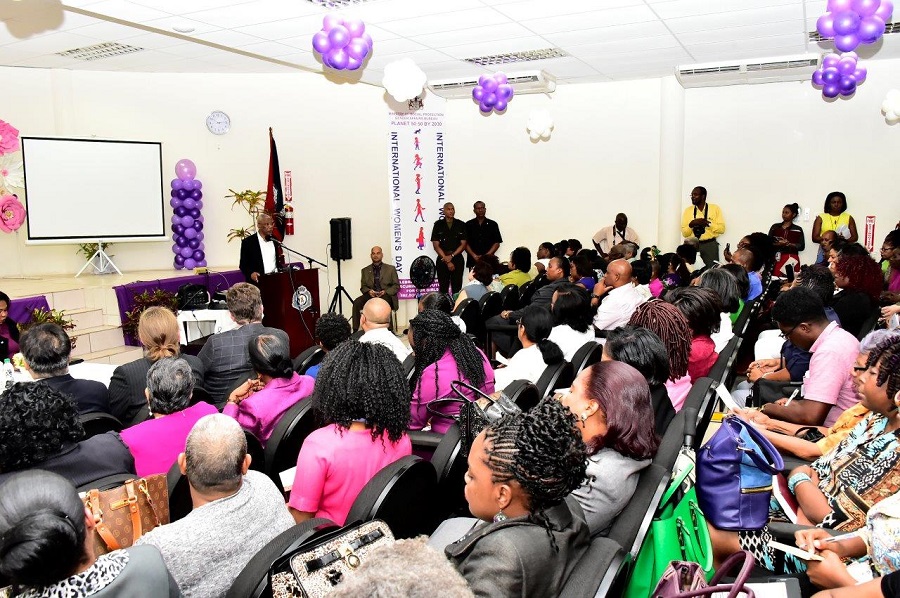 The Head of State is of the firm belief that all women, whether they work in or out of the home, must be empowered to take on leadership roles and become involved in political decision-making.

Meanwhile, Minister of Social Cohesion, Ms. Amna Ally said that if the country fails to address gender inequality and discrimination against women, it will be impossible to achieve Goal No. 5. “Accomplishing Planet 50-50 entails recognising the basis of the 2030 agenda for sustainable development, which is inclusivity. Women and girls must not be marginalised or excluded in areas such as access to education, decent work, equitable wages, basic services and protection from gender-based violence,” she said. 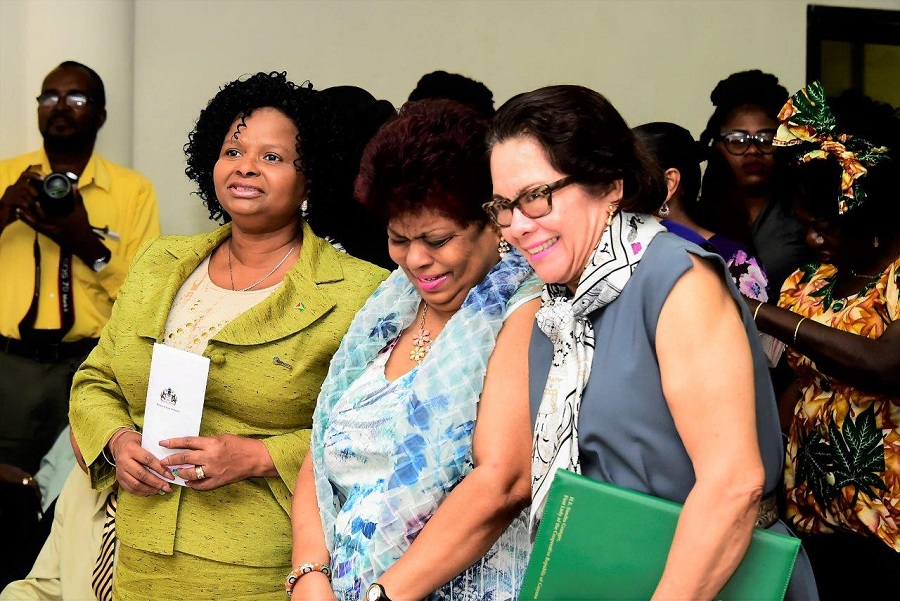 The Minister added that despite the marked progress made over the years, women in Guyana and around the work are still facing severe difficulties as a result of structural, institutional, and cultural barriers. It is for this reason she said, that all stakeholders must work to build enabling environment that would allow women to meet their full potentials. “If women have a chance to work and earn as full and equal partners in society, their families thrive and when families thrive, communities and nations will thrive,” she said.

She assured that her Ministry will continue to assist women, particularly those who are vulnerable and are in difficult circumstances through its numerous social programmes that promote empowerment through entrepreneurship and micro-financing schemes. 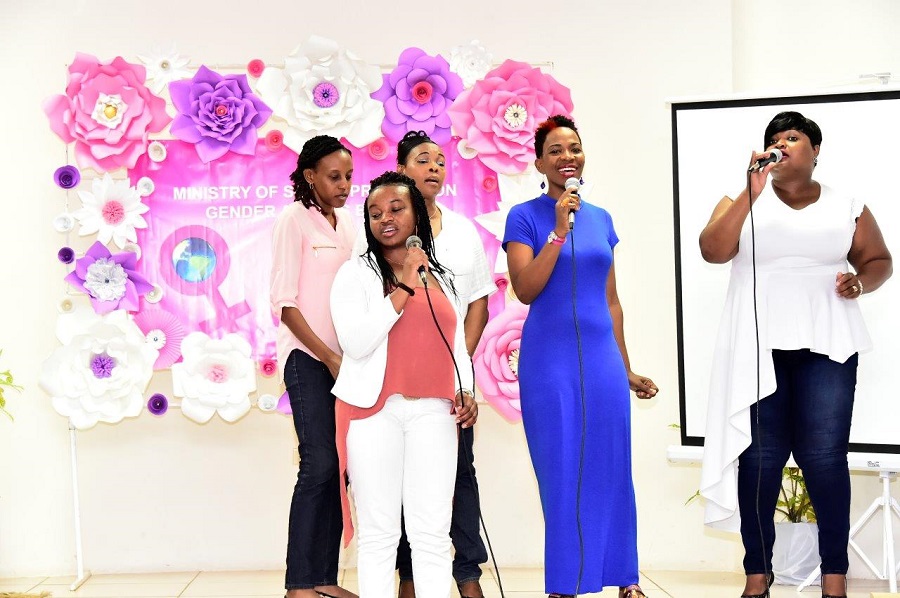 The Vision All Female Band performing for the audience

During that engagement, Mrs. Granger urged women not to accept parameters that seek to dictate and control their lives. “Throughout history, women have proven that they can adapt and develop skills to suit their needs and their environment. Our history shows that our female ancestors- enslaved and indentured- confronted the challenge of living in a hostile environment and overcame adversity to help build the society we know today. We have proven that we are not squeamish when it comes to making tough decisions and jumping into action,” she said.

The First Lady also encourage women to demand equal pay for equal work and pointed that through equality, women, who comprise 50.2 percent of the population, can move towards greater gender parity.

IWD is a global day celebrating the social, economic, cultural and political achievements of women. The day also marks a call to action for accelerating gender parity. The day, March 8, has been observed since in the early 1900’s, at a time when there was great expansion and turbulence in the industrialised world that saw booming population growth and the rise of radical ideologies.