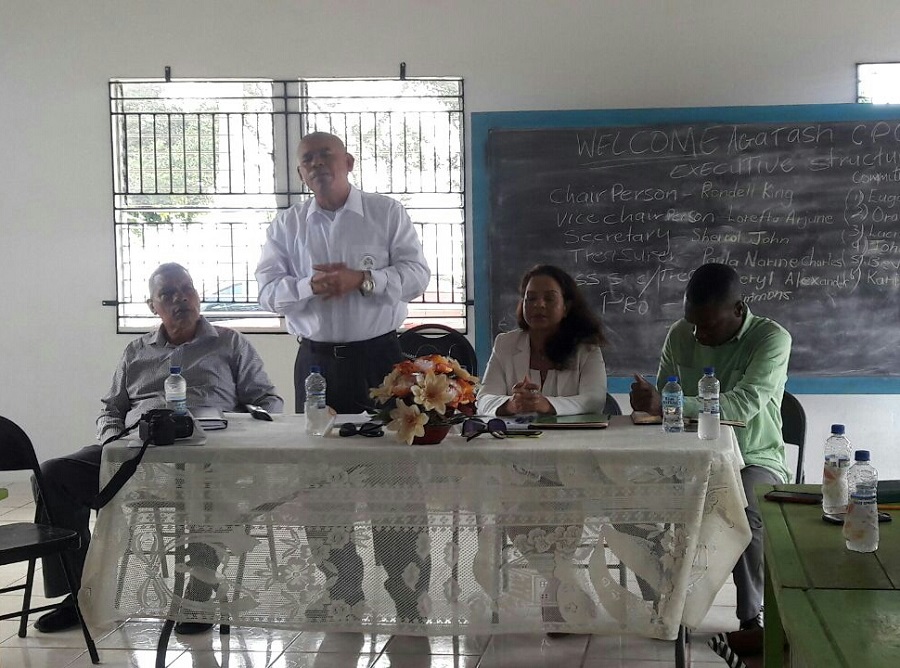 Georgetown, Guyana – (March 8, 2017) Residents of the community of Agatash in Bartica, Cuyuni-Mazaruni (Region Seven) were on Monday, urged by Social Cohesion Minister, Dr. George Norton and regional officials to work together for the development of that community.

The Chairman of the Community Development Council (CDC), Mark Ambrose and Constituency Representative, Sonia Simmons have been unable to see “eye-to-eye” on matters pertaining to decision making in the community and Minister Norton was asked to intervene. Some residents of Agatash expressed concern over what they described as poor communication between the CDC and members of the community as well as the council’s alleged failure to involve members of the community in decision-making processes.

However, other residents highlighted that there is often poor turnout at meetings, which are held in the community. In that regard, Minister Norton urged the residents to attend the meetings, which are held in the best interest of the development of the community so that decisions can be made. “You can only know what is happening in the meetings if you attend. You have got to come to the meetings and you have got to get involved. And if you don’t like what is going on then you should voice your opinions,” he emphasised. The Minister assured the residents that the Ministry of Social Cohesion is willing to provide any support that it can to the community.

Meanwhile, Bartica Mayor, Mr. Gifford Marshall said that Agatash has great potential, even as he made a recommendation on the way forward. “My recommendation, having listened to the residents of Agatash, is that we spend the next few months doing what we call capacity building and institutional strengthening so that those who are elected will understand their roles and responsibilities and the residents too will also understand their roles and responsibilities,” he stated. The Mayor urged the residents to work together as a community to better the lives of each and every person that is living there.

Regional Chairman, Mr. Gordon Bradford also encouraged the residents to work together, citing that if a community is divided, development will be stymied. “I wish all the residents of Agatash would put those petty differences aside and work together. I believe that the best thing that we can do is to support the leader of the day and let us see how much we can achieve by working together with whichever leader is appointed,” he said.