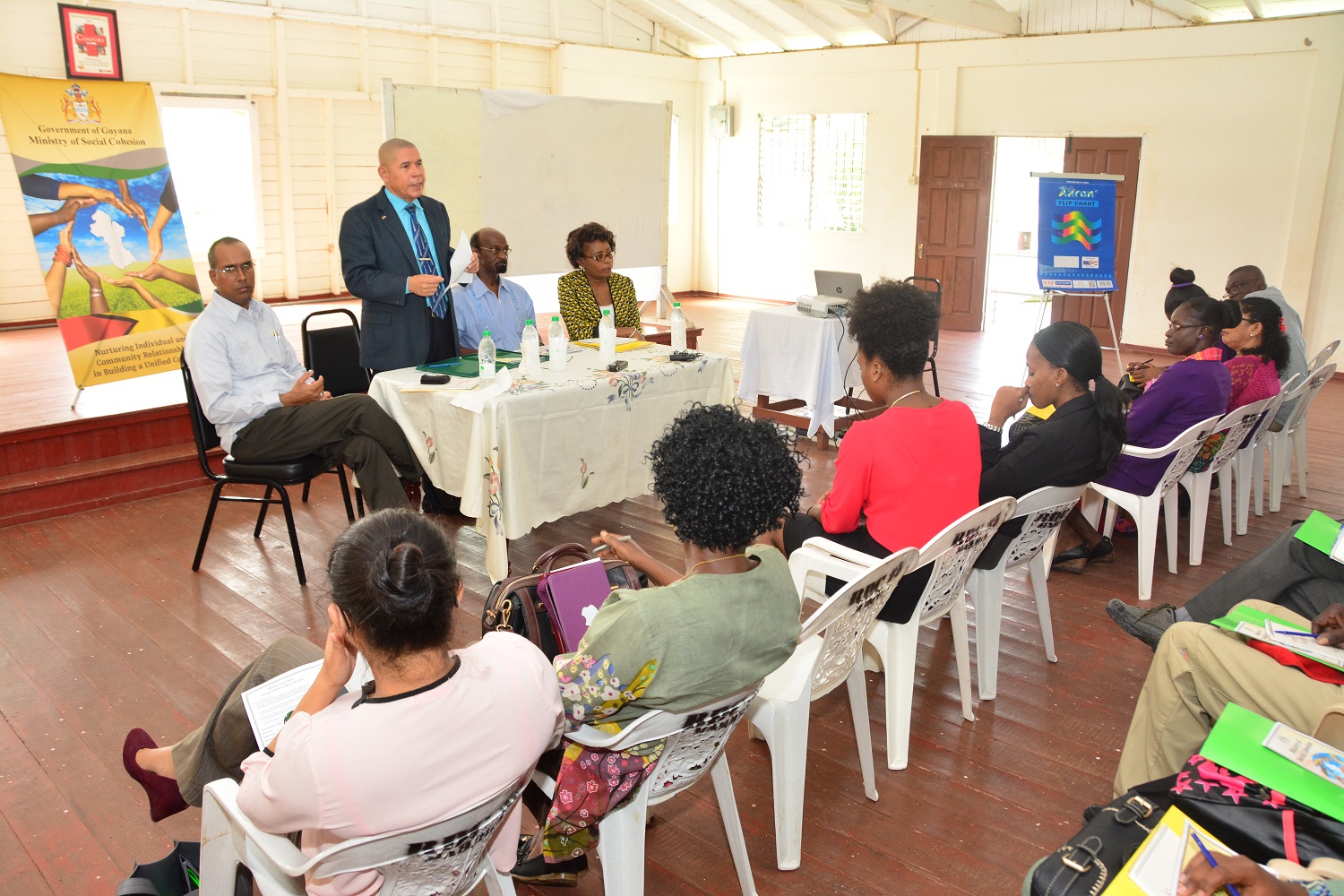 Georgetown, Guyana – (February 8, 2017) Minister of Social Cohesion, Dr. George Norton, today, urged residents of Mahaicony to let their diversity work as a unifying force, rather than as a divisive factor. He was at the time delivering remarks at the opening of a two-day Diversity Education and Inclusion Regional Training Workshop at the Zeskendren Community Centre. This is the second such workshop that the Ministry has conducted in the Mahaica-Berbice Region (Region Five); the first being held at Fort Wellington. Thus far, 23 workshops have been held across the 10 Administrative Regions with the aim of advancing the Government’s social cohesion mandate.

Minister Norton explained that the overall objective is to increase awareness of self and sensitivity so that Guyanese can become more aware of behaviours that would contribute to building better relationships. “Guyana is a unique, diverse society and it is vital that we not only understand the diversity but also be able to use it to our advantage. It is often said, that there is unity in diversity and each of us bring with us, different strengths and perspectives, which can be utilised to achieve the common goal for all of us; for our community, our region and our country as a whole. We must not use our diversity as a divisive factor or we will not develop as a nation,” he said.

The Minister said that people long for the security and unity that is inherent in close-knit communities and assured that the goal of his Ministry is to work with citizens to develop that kind of collectiveness and unity in all communities.

“Each of us has a role to play to ensure that Guyana is socially cohesive… Let us make real the vision of a united Guyana where diversities are embraced, conflicts are resolved, networks and collaboration with stakeholders are strengthened, equity promoted and where the decision-making process results in equal opportunities and benefits to all,” Minister Norton said.

He also urged participants of the workshop to share their new knowledge. “When you go back to you communities after receiving your training, start at the level of the household, then you go to your neighbours, then you take the message to whatever cluster you belong; whether it is religious, or youth or your workplace,” he urged.

Meanwhile, Programme Coordinator in the Ministry of Social Cohesion, Ms. Sharon Patterson delivered a presentation on the work of the Ministry. She explained that this stakeholder training programme will serve to explore the negative internalised attitudes, beliefs and stereotypes that impact the way individuals perceive themselves and others. Additionally, it will also assist constituents to have a better understanding and appreciation of their diversity, particularly as it relates to race and ethnicity.

Regional Executive Officer (REO) of Region Five, Mr. Ovid Morrison told the participants to bring to the table frank and opens discussions, all of their perceptions of individuals and society with a view of finding remedies to the biases that still exist. “I am asking all of us here, during this period of deliberation, that we build the structure to achieve national social cohesion and let us do it with the understanding that we will be lifting not only Guyanese but also the image of this country internationally,” the REO said.