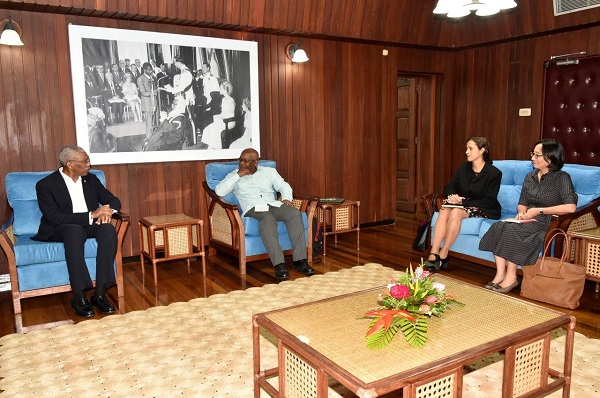 Georgetown, Guyana – (December 14, 2016) A team from the United Nations Environment Programme (UNEP), who are currently in Guyana to support the development of the Green State Development Strategy (GSDS) in collaboration with the Project Management Office in the Ministry of the Presidency, today, registered their overall satisfaction with the progress of their work and the pace at which Guyana is moving in the pursuit of the ‘green’ agenda.

The team, which was led by United Nations Resident Representative in Guyana, Ms. Mikiko Tanaka and Head of the UNEP Caribbean Sub-Regional Office, Mr. Vincent Sweeney, met with President David Granger, earlier this afternoon, at the Ministry of the Presidency. During the meeting President Granger expressed the Government’s and the country’s commitment to pursuing the ‘green’ path and staying the path, even with the country set to become an oil producing nation. “What would be generated offshore won’t affect our pursuit of a ‘green’ state. We won’t abandon that path once we have embarked on that mission,” President Granger said.

In an invited comment, Mr. Sweeney said that it was encouraged not only by the administration’s efforts to advance the ‘green’ state development programme, but is also satisfied that the private sector, civil society and the Government, all seem to be on ‘the same page’ about what is required to achieve this goal.

“We were very encouraged by the discussions and commitment we had from His Excellency. His vision is very much coincidental with the feedback that we have been getting from the stakeholders that we would have met with. You could swear he was almost in the room listening because everybody seems to be very supportive of the ‘green’ state development initiative. The priorities of the President seem to be very much in line, particularly in terms of job creation, improving efficiencies, sustainable energies, people centered and essentially making sure that nobody is left behind. The time frame is also consistent because people want to see action and benefit in the long term and short term. We are very encouraged with all that we have heard,” he said.

President David Granger in discussion with the team at the Ministry of the Presidency, earlier today.

The team, which is in Guyana for three days, has already held consultations with the Private Sector, Ministries of the Government, members of civil society, stakeholders from the environmental sector and its own United Nations Country team here in Guyana. “What we have been doing is trying to identify what the priorities might be for the country in terms of the GSDS and trying to incorporate those into a document that would be considered by the various groups including the President himself,’ Mr. Sweeney said.

Ms. Adriana Farah, Regional Coordinator, Resource Efficiency, for Latin America and the Caribbean, who was also at the meeting, told the President that the team was inspired and motivated by Guyana’s commitment to being a leader in the fight against Climate Change. “We are encouraged by your commitment. We have met a lot of people but few Presidents like you, who are committed to the protection of the Environment,” she said.

Head of the Project Management Office (PMO) in the Ministry of the Presidency, Mr. Marlon Bristol, who is primarily responsible for the coordination efforts, said that the Green State Development Strategy is an all-inclusive strategy that incorporates the sustainable development components.

“It is not an exclusion of the LCDS. It is basically a broadening of the LCDS to what they generally term low emissions development. And by low emissions, we expand development in a sustainable way beyond the management of standing forests. So we extend it now to transport, water, ICT. So the GSDS is really an all-inclusive strategy… The document is meant to be a very comprehensive document that will look into all the sectors and the supportive sectors. So the GSDS is basically the strategy that takes us forward to the ‘green’ State. The ‘green’ state in itself is that result we want to achieve. That strategy basically highlights Guyana’s sustainable development pathway or the path we take to sustainable development,” he said.

His role, Mr. Bristol said, is really to deliver this strategy as the document that will guide Guyana’s development from now, through 2030. “As part of that process, we try to mobilise the financing. We try to engage with the partner entities but our role is now extending beyond that because we have had very intimate discussions with the Office of Climate Change (OCC), with the Department of the Environment and all Heads of all the major agencies on what this should look like. So we have invited the UNEP as part of this exercise. As part of that mission we hope to have consultations in clusters for what we call the GSDS Framework. This framework is basically a scoping document that will identify not only the scope but the structure and what are the core sectors, what are the supportive sectors. These are the things that the public court of opinion seems to think have been missing and this strategy seeks to bring all of that together,” he explained.

The document will be developed in two phases, with its initial construction based on all the technical input and some preliminary consultations. Following that, there will be national consultations, during which additional expertise will be brought in.

Ms. Janelle Christian, Head of the Office of Climate Change, said that whatever comes out of that framework will address Guyana’s climate vulnerability, increase the country’s resilience, ensure that there are transformative climate change adaptation projects and that the country is positioned to have transformative, renewable energy projects to deal with climate mitigation.

Ms. Tanaka, in an invited comment, said that United Nations is pleased to support President Granger’s vision of a Green State Development agenda as has been requested. “[We had been asked to] support the realisation of that in many ways and so one is the Development of the strategy itself. This is where the UNEP was asked to lead and we will support them and contribute support and advice. UNEP leadership I think can bring in good examples, ideas, expertise and other things on how to strategise and implement green development,” she said.

The Head of State, during his attendance at the Twenty-Second Conference of Parties of the United Nations Framework Convention on Climate Change, had met with Executive Director of the United Nations Environmental Programme, Mr. Erik Solheim, who is well known for having signed the Norway-Guyana Agreement on the banks of the Essequibo River when he was Norwegian Minister of International Development and the Environment. During that meeting, Mr. Solheim had expressed his support for Guyana’s ‘green’ state development agenda.