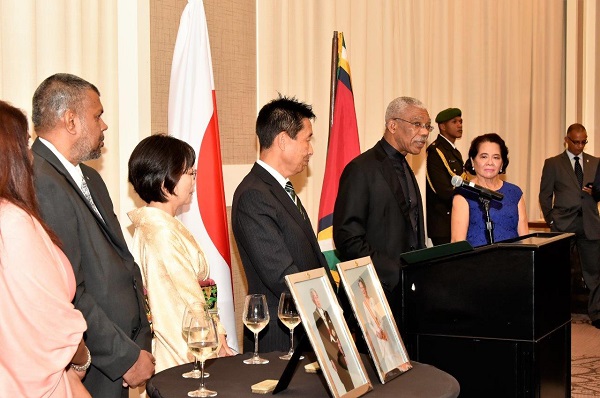 Georgetown, Guyana – (December 14, 2016) President David Granger, this evening, said that as Guyana pursues the achievement of a ‘green’ state, the country looks forward to the continued support of the Government and people of Japan as a strong partner in its climate change and sustainable development initiatives.

Speaking at a reception held at the Marriott Hotel Guyana, earlier this evening, in honour of the 83rd birth anniversary of His Imperial Majesty Akihito of Japan, the President said that as Guyana joins with the people of the State of Japan in celebration, Japan remains, under his guidance, an important member of the Community of Nations and an important partner to Guyana.

Having established formal diplomatic relations on June 11, 1969, the President said that relations between the two countries have blossomed over the past 47 years.

“Japan is an important development partner for Guyana. Relations have been to our mutual benefit. Guyana has benefited from Japanese assistance in a wide range of areas including education, empowerment of youth, the environment; especially flood control, renewable energy generation, public health, public infrastructure, and water management. Our relations have strengthened since the enthronement of His Imperial Majesty Akihito. We signed the ‘Joint Declaration on Enhanced Cooperation on Environment and Climate Change issues between Japan and the Republic of Guyana’ nine years ago. The Declaration identified climate change, sustainable forest management and water and sanitation as priority areas for cooperation,” the President said.

President David Granger addressing the invitees at the reception held at the Marriott Hotel Guyana, earlier this evening.

The President noted that since then, cooperation in the areas of electricity, conservancy management, disaster risk preparedness, skills training, solid waste management, water and youth development has been a cornerstone of relations between the two countries. As Guyana embarks on the pursuit of a ‘green’ state, the President said that Japan’s support would be welcomed.

“[There will be] emphasis on the protection of our environment, the preservation of our biodiversity, the provision of eco-tourism and eco-educational services and the promotion of practical measures to ensure climate adaptation. We are committed to placing an additional two million hectares of our country under conservation. We are committed to a low carbon, low emission trajectory of development. Guyana looks forward to the support of Japan in defence of the principles of international law, particularly respect for the territorial integrity and sovereignty of small states, non-interference, in the internal affairs of states and the right of all states to develop free from aggression and threats of suggestion,” he said.

Meanwhile, Non-resident Ambassador of Japan to Guyana, Mr. Mitsuhiko Okada, in his remarks, said that the two countries, though separated by great distance, have shared common values such as democracy, the rule of law, the fight against climate change and respect for human rights.

“Japan values its cooperative ties with Guyana, whose leadership in this region is amply demonstrated by its ability to successfully serve as host country to the CARICOM Secretariat. Our ties have been evident in the robust human exchanges between Guyana and Japan. Over the years, countless Guyanese nationals have visited Japan through technical training programmes in the areas such as sustainable fisheries development, disaster risk reduction and water resource management… I have great admiration for Guyana’s exemplary role in the Caribbean. As the Japanese Ambassador to Guyana, I will make every effort to introduce to the Japanese people, the natural beauty, cultural diversity and abundance of natural resources of this magnificent country,” the Ambassador said. 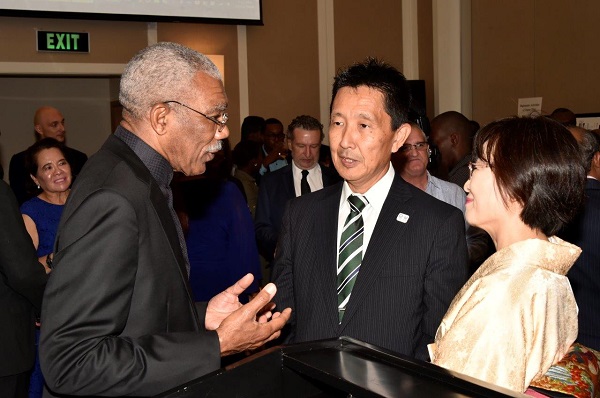 President Granger shares a light moment with Non-Resident Ambassador of Japan to Guyana, Mr. Mitsuhiko Okada and Mrs. Okada at the reception this evening.