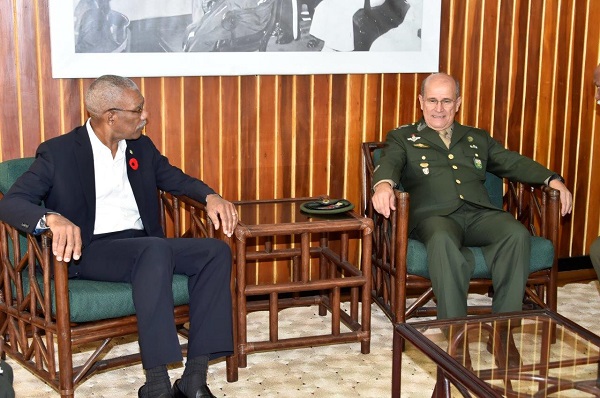 Georgetown, Guyana – (November 2, 2016) Military Commander of the North of the Brazilian Armed Forces, General Carlos Alberto Neiva Barcellos, today, paid a courtesy call on President David Granger, at the Ministry of the Presidency.

During the meeting, several areas relating to security and territorial integrity as well as the existing areas of cooperation between the two countries were discussed.

Brigadier Lewis, in an invited comment, said that the Brazilian team is in Guyana for discussions with the GDF in areas of cooperation, in an effort to build a stronger, friendlier relationship between the two military organisations.

President David Granger engaging the Military Commander of the North of the Brazilian Armed Forces, General Carlos Alberto Neiva Barcellos, during their meeting, this morning, at the Ministry of the Presidency.