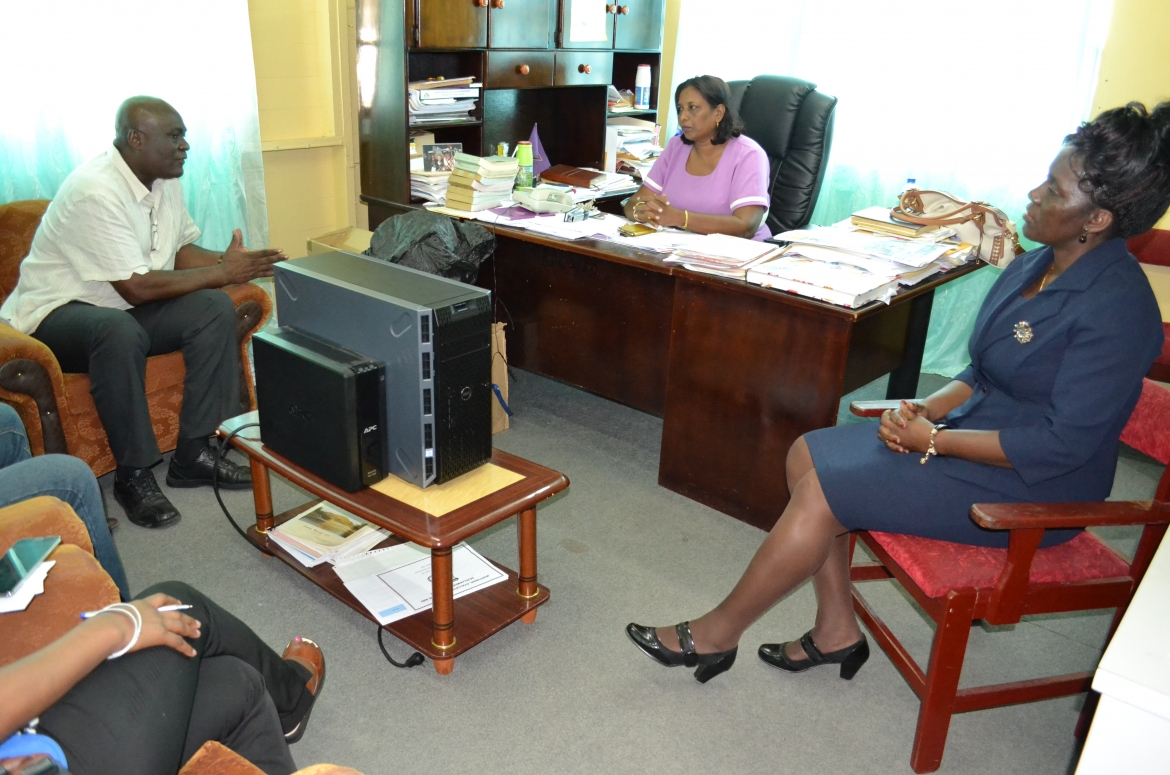 Georgetown, Guyana – (September 28, 2016) The eGovernment Agency has completed the first phase of the Improving Digital Equity, Access and Learning (IDEAL) Programme, which has provided for 100 institutions to be connected to the eGovernment network along the Coast and Chief Executive Officer of the eGovernment Agency, Mr. Floyd Levi said that the Agency is now embarking on the second phase of this project.

Mr. Levi made these comments yesterday during a visit to Pomeroon-Supanaam (Region Two) during which the Agency sought to conduct assessments at the 11 institutions, which benefitted from the initiative in that Region. IDEAL includes the provision of a database for the creation of an interconnected e-government network within Ministries and their related agencies across the country, as well as the creation of ICT Hubs, within communities and the now completed educational institutions.

Chief Executive Officer of the eGovernment Agency, Mr. Floyd Levi met with the Regional Education Officer, Mrs. Baramdai Seepersaud (centre) to discuss the progress of the Secondary Schools Connectivity Project, which is part of the IDEAL programme

Agency officials met with the REDO, Ms. Baramdai Seepersaud who said that based on interactions with several of the schools, the service has since been working extremely well and will certainly aid in research and access to information. The trip also allowed for further recommendations to be made as to the expansion of phase one of the project in the Region.

During a visit to the NOC, the Agency was also able to commit to the provision of 15 computer systems for the institution’s Information Technology Laboratory. Mr. Levi said that the Agency will also fill in the gap created by a shortage of teachers to provide training for the juveniles, resident at the NOC. He stated that just like other students, the juveniles at the NOC deserve an equal opportunity. “These students need life skills that can serve them well in the future and these things form very much a part of that future. So they have to be prepared that when they leave here they can integrate well into society and can lead meaningful and productive lives,” he said.

The second phase of the IDEAL Programme also includes the establishment of Community ICT Hubs, which will see the provision of free internet services within identified communities.  This project involves meeting with key stakeholders to identify communities and meeting with the community members, the installation of systems in identified locations that are accessible by all community members and engaging with the private sector collaborations for the equipping and furnishing of hubs, where needed.

Mr. Levi said that following meetings with the Regional Administration, the communities of Dartmouth, Lima Sans, Good Success, Charity and Aurora have been identified for the implementation of this project. During consultations with the Regional Executive Officer of Region Two, Mr. Rupert Hopkinson, the Agency was able to secure space at the Regional Office in Anna Regina where it can set up a permanent location so as to monitor the eGovernment services in the Region.