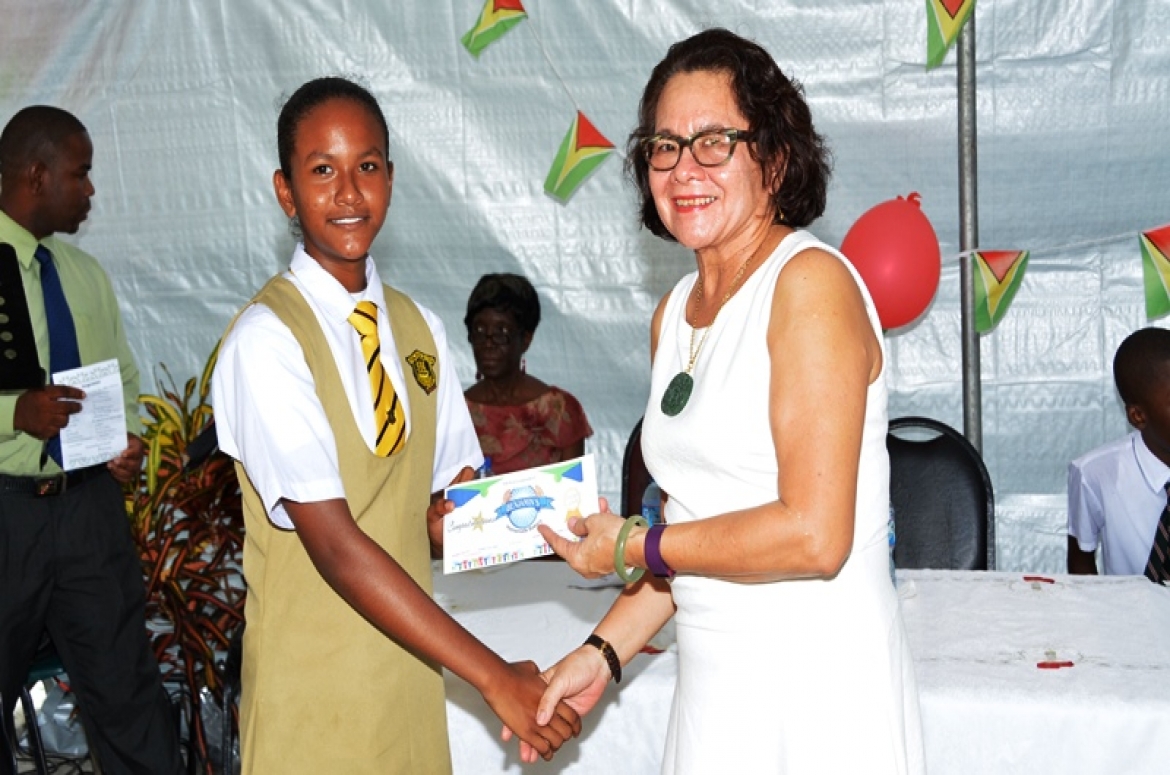 Georgetown, Guyana – (September 28, 2016) First Lady, Mrs. Sandra Granger, this evening, urged the National Grade Six Assessment 2016 top performers from the East Coast of Demerara to ‘be all they can be’ even as she reminded them that they must never forget where they came from or whose shoulders they stood on to achieve their success.

The First Lady was at the time speaking at the Benjamin’s Bakery Annual Bursary ceremony, which was held at its Buxton location today. This is the tenth year that the Benjamin family has been spearheading the initiative. Initially it began with the three Primary schools in Buxton but over the years, it began to grow to include the other schools along the East Coast corridor.

Addressing parents, teachers and students alike, the First Lady said that the simple but significant ceremony put on by the Benjamin family is recognition of the seriousness with which the young persons approached the examinations. She noted that it is a vindication of the work of their teachers and the effort of their parents but more importantly, she said, it is also a stirring example of the interest and the corporate responsibility of Mr. Wesley Benjamin and Benjamin’s Bakery to the community they serve.

“This is the tenth year in which the Benjamin family has demonstrated, in a tangible way, its commitment to the children, who have been attending primary schools between Beterverwagting and Enmore on the East Coast of Demerara… This is just the beginning. I urge you, the awardees, to take advantage of all the opportunities opening before you as you continue your education and, borrowing from the American slogan, “Be all that you can be.” While you are doing so, never forget where you come from and on whose shoulders you are standing, so that when your times comes, you can be the ones offering support and helping hand to the next generation of school children,” Mrs. Granger said.

Mrs. Granger said that education has been one of the pillars of her husband, President David Granger’s administration, under whom the Five B’s ‘Boats, Buses, Bicycles, Breakfast plus Books’ initiative was born, with the aim of ensuring that the barriers to education are broken down so that every child can be in school.

“As you know, your government is committed to ensuring that every child receives the education, which is her of his right. That is why it was adopted the slogan, “Every child in school.” That is the reason for the Three B’s initiative which has now evolved into the Five B’s, because your Government knows that if children are to benefit from education, they must have the means to get to and from school, they must have the books that they need for the subjects they are studying and they must have food in their bellies so that they can concentrate on their schoolwork,” the First Lady said.

Mrs. Granger noted that history has proven that Buxton- the village where Benjamin’s Bakery is located, has always stood out as a village, which values education and it is heartening to know that this tradition of putting education first and rewarding those who would have excelled, is being continued.

“Benjamin’s Bakery not only provides tasty snacks to the students of the Buxton Youth Development Initiative, it embraces its role as a part of this community and continues that tradition both of service and of valuing education. It has recognised and continues to honour the young girls and boys, who applied themselves and gained places in our nation’s top schools,” she said.

Kevon Benjamin, son of the proprietor, Mr, Wesley Benjamin, said that his father has always believed in blessing others when he receives and this belief has transcended into the bursary awards over the years. He told the students that they must see the incentive as a means of motivation to keep working harder as they pursue their education so that they can achieve success in life.

“Contentment does not end with receiving only but when you receive, you must give back and I know that this is my father’s belief. You students are very lucky. Please do not see this as an increase in your spending ability or to buy fancy things but see it as a means of encouragement to reach higher heights,” he said. 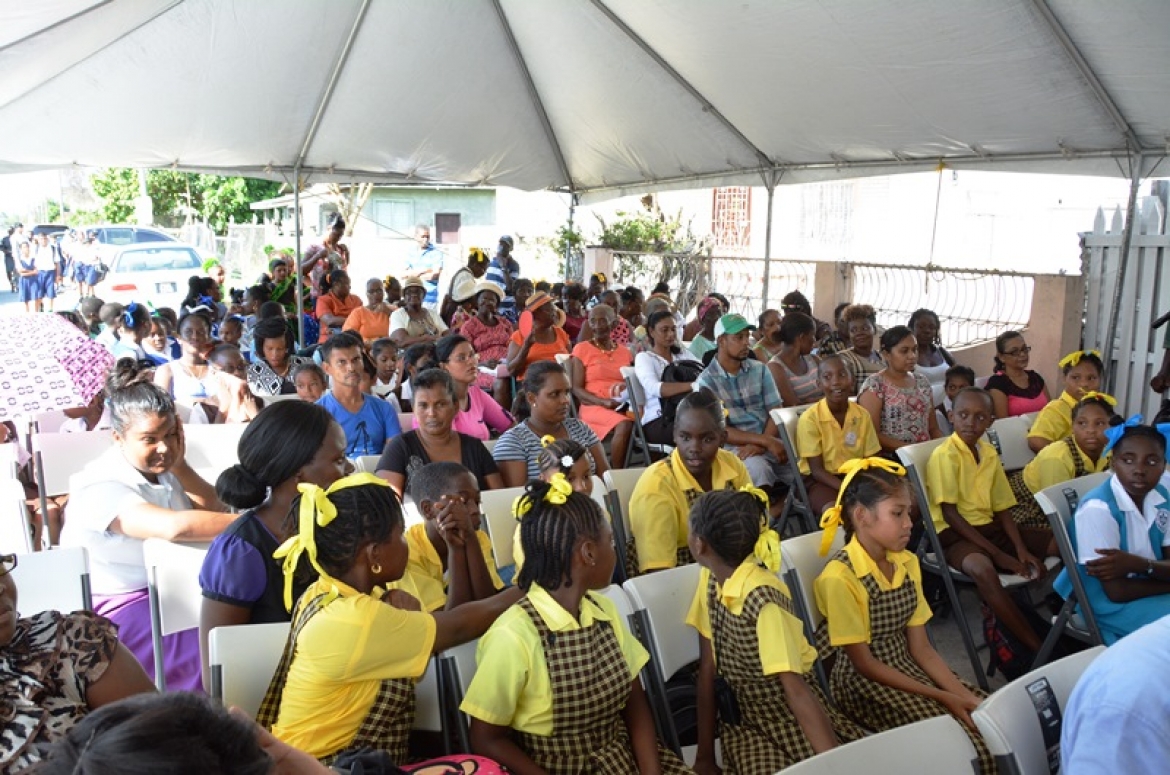 A section of the gathering, which included parents, teachers and students at the Bursary ceremony today in Buxton.

Morris Wilson, a prominent villager, praised the Benjamin family for the initiative, as he noted that it is one that will certainly make a difference in the lives of the awardees. Mr. Wilson told the students too that their successes do not stop at this juncture, but this is the beginning of the journey which lies ahead.

“Keep on working hard and you will succeed. I would like to congratulate the Benjamin family for making this possible. Young people, education is important, it is one of the pillars of success and you need to remain focused and educate yourself but it doesn’t end there. Academic excellence is no guarantee of future success. You need to empower yourselves and you need to help build your communities; empower yourselves, your community and your country,” he said.

Ms. Aletha Joseph, one of the awardees, who hails from Montrose Primary and placed 15th in the country with 558 marks, securing a place at Queen’s College, expressed gratitude to the family for their generosity and she noted that it is a good feeling to be recognised and appreciated.