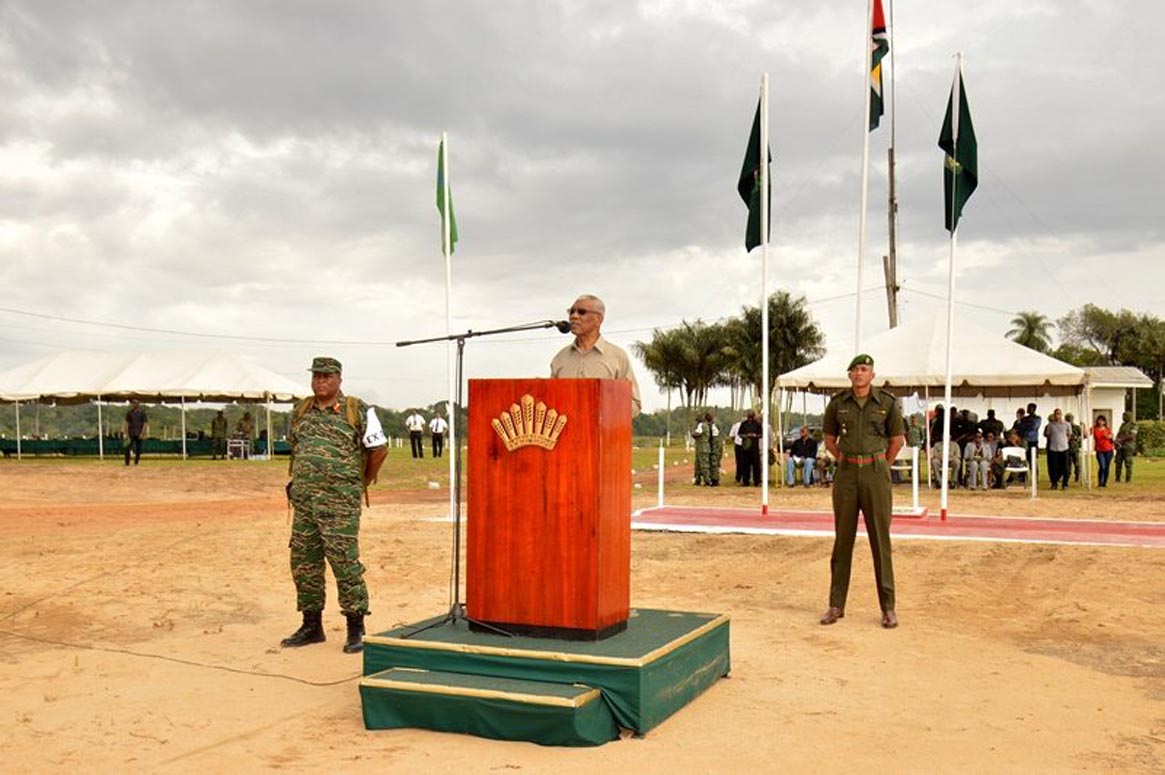 Georgetown, Guyana – (August 25, 2016) Commander-in-Chief of the Guyana Armed Forces, President David Granger, this morning, congratulated the troops of the Guyana Defence Force (GDF), who participated in the week-long Field Tactical Exercise (FTX) ‘HOMEGUARD’, noting that the exercise has served to reaffirm and reassure the Defence Board and the Guyanese people, that the Force is always ready to fulfil its mission. The Head of State made these comments after witnessing the ‘final attack’, along with Prime Minister Moses Nagamootoo, Vice President and Foreign Minister, Mr. Carl Greenidge, Minister of State, Mr. Joseph Harmon, Chief of Staff of the Guyana Defence Force, Brigadier Mark Phillips and other senior officers of the GDF and officials from the Ministry of Finance at the  Tacama Training Area (TTA), Berbice River.

The exercise commenced on August 16, 2016 with the final contingent of troops moving into the Exercise Area located in the jungle and savannahs of Ituni, Upper Demerara-Berbice (Region Ten)  and Tacama East Berbice-Corentyne (Region Six). The high level of diligence displayed by troops resulted in the Exercise being concluded one day ahead of schedule.  The Exercise is designed to assess the GDF troops in Close Country Warfare (CCW) and Open Country Warfare (OCW) simulations of battle. It utilised all available resources and pitted the troops against a simulated enemy to validate training at all levels.

President David Granger addressing the troops upon the completion of the ‘final attack’ and consequently, Exercise HOMEGUARD, at the Tacama Training Area, early this morning.

The President said that the GDF has a mandate to protect the citizens and defend the territorial integrity of the country. It is therefore imperative, he said, that training is held round-the-clock to ensure that the servicemen are always prepared and ready for any challenges, which may arise.

“The Force, in order to accomplish its mission, if it is to master the art of war; it must train. In Guyana, you must master, also, Guyana’s diverse landscape; consisting of the low, flat coastal plain, hilly sandy zone, undulating savannahs, swampy wetlands, verdant rainforests, majestic mountains and myriad meandering creeks and rivers.  You have to learn to operate in all of these areas and I am happy that HOMEGUARD has moved you in different terrains, different landscapes so that you master all of the ecological zones in this great country. The Force’s mandate demands leadership on the part of every officer and, on the part of every soldier and unit. You have to have the ability to operate anywhere in Guyana; by day or by night, whether the sun is shining or it’s raining,” President Granger said.

The TTA is the main training area of the Colonel John Clarke Military School and is located 160 km up the Berbice River in over 350 km² of savannah, has been an ideal site for defence training over the years for generations of troops, the President said.  These training exercises, he added, are important to the nation’s security. 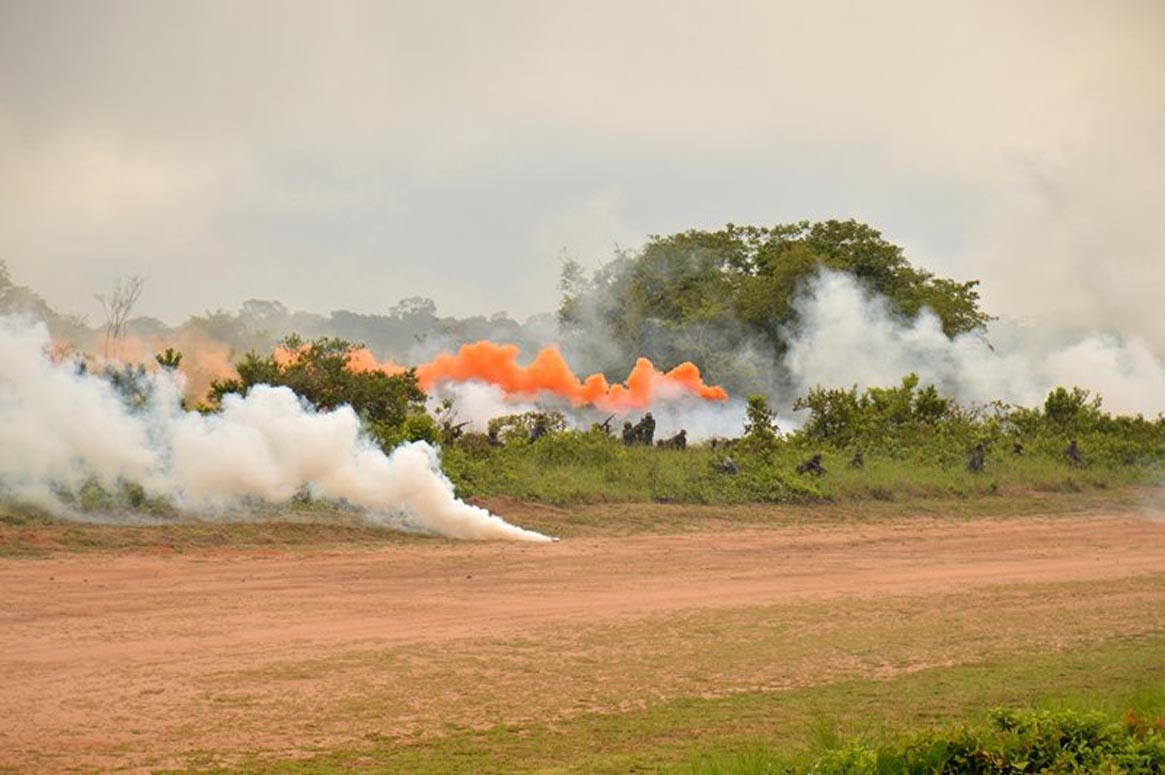 This was one of the scenes at the Tacama Training Area this morning, as the ‘final attack’ of Exercise HOMEGUARD got underway.

“Exercise Home Guard ensures that the Force is tactically trained and adequately equipped to defend this country should the need arise.  Exercise Home Guard is a reaffirmation and reassurance to the Guyana Defence Board, some members of which are present today, that the Force is properly commanded and ready to fulfil its mission. Exercise Home Guard, through the training and tactical prowess that you have displayed so competently and convincingly, is a source of comfort to our citizens. They can rest secure in the knowledge that you stand watch over our motherland, securing it danger,” the Commander–in-Chief said.

Chief of Staff of the GDF, Brigadier Mark Phillips, in sounding a victory call for the troops, said that they had indeed excelled. He noted that this success is demonstrated through the early completion of the Exercise.

Colonel George Lewis, Deputy Chief of Staff of the Guyana Defence Force (GDF), in his briefing before the commencement of the ‘final attack’, said that the aim of the exercise was to directly assess the operational readiness and capability of the GDF in close and open country operation. He disclosed that 91 Officers and 945 ranks from the Force participated in the Exercise.

According to the Force, Exercise HOMEGUARD follows ten months on the heels of the successfully completed Exercise GREENHEART, which was conducted in Cuyuni-Mazaruni (Region Seven) last November. These Exercises are all part of the continuous training for the Officers and Ranks of the GDF, and are also designed to enable them to test theories and develop new strategies related to how OCW and CCW can best be executed.