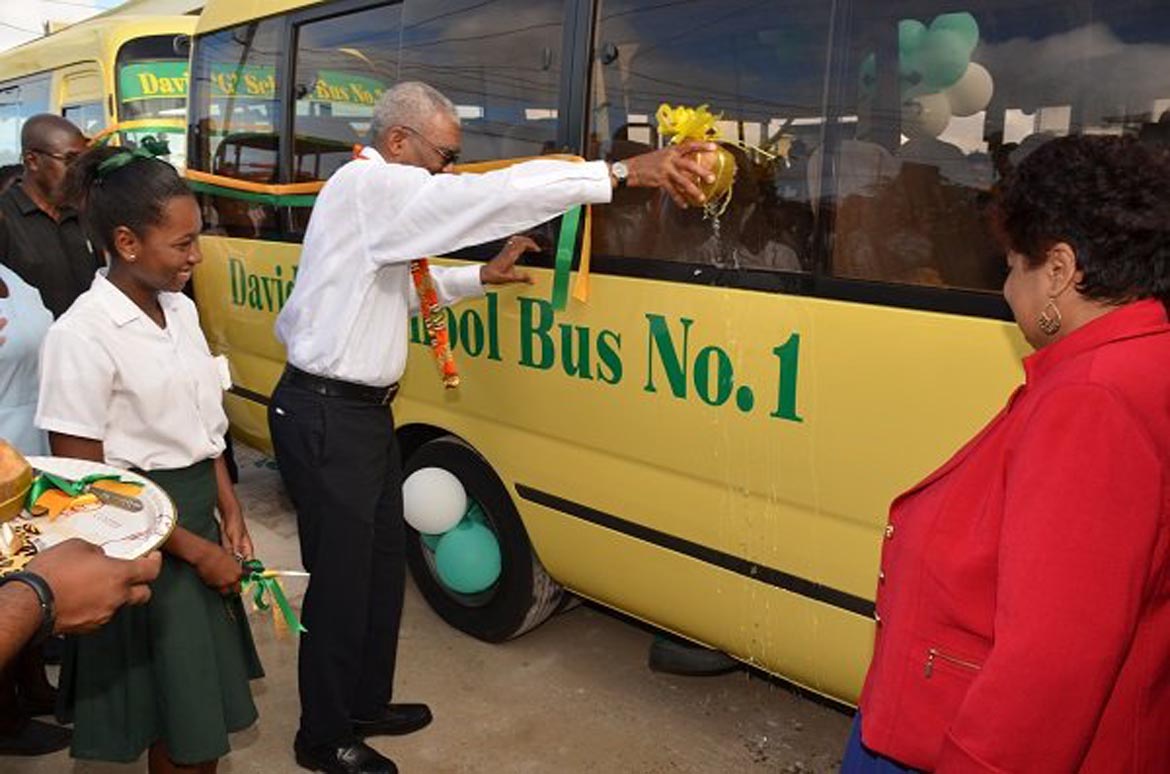 Georgetown, Guyana – (July 8, 2016) With education as the topmost priority of the current administration, President David Granger’s Five Bs Initiative, aimed at providing boats, buses, bicycles, breakfast and books to school children, has as a result given way to easier access to school and other basic school needs for many students across the country.

Over the past year the Five Bs Initiative quickly became a widespread success, gaining momentum and donations from the business community and allowing the administration to take the programme all across the country. So far ten buses, nine boats and hundreds of bicycles have been donated to several communities in aid of easing transportation problems for school children. This is just one aspect of President Granger’s push to ensure every child goes to school but it has resulted in members of the private sector and ordinary citizens joining with Government to bring about tangible results for many families across Guyana. There are already reports that these donations have begun to increase school attendance and ease the financial burdens that some parents face in sending their children to school.

President Granger has said that the initiative will pay dividends for the development of the regions in which they operate: to improve education, to improve access to jobs and to assist the youth in participating in enterprise. He added that the initiative was introduced following a visit to the Pomeroon, in which he was informed of the high cost of transportation for children to get to and from school.

Benefit to the communities

As a result, the riverine communities within the Pomeroon-Supenaam Region were among the first to benefit from the initiative, and have since received three boats, which transport children to and from school along the Pomeroon River.

Earlier this year, the first two buses were commissioned in the Mahaica-Berbice Region. At that event, the President emphasised the importance of education in eradicating poverty, adding that with equal access to education, the country will not only develop rapidly, but also prevent children from falling victim to negative activities.

Later on, in February, it was the residents of the East Berbice-Corentyne Region who benefitted from a 50 seater bus as President Granger continued to spread his message of the importance of education to empowering the children to take charge of their country, becoming business owners and informed decision makers.

In March, the newly commissioned town of Bartica received its first Bus and 30 bicycles. There, the president said that access to education also reduces poverty and inequality, stating that education is in fact, the foundation of inequality. “One of the reasons there is so much poverty is because there is so much inequality. Once the child of a rich man and the child of a poor man have the same education, they have the chance to be equal and then they have a better opportunity at employment and making sure that you have a good life,” he said. 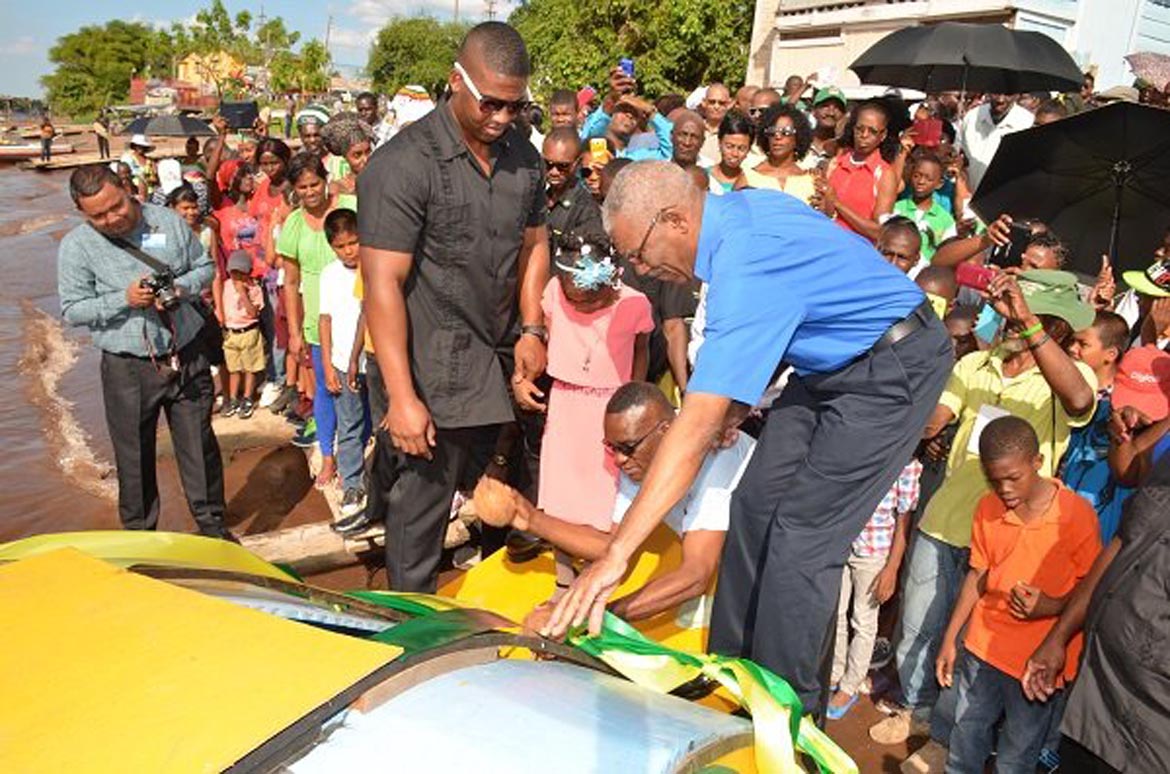 President David Granger commissioned a boat in Linden, in the Upper Demerara Berbice Region in January 2016

Other areas, which have benefitted through this initiative so far, include Kuru Kururu, which received a bus and the Riverine communities of Moraikobai on the Mahaicony River, Baracara Village in the East Berbice-Corentyne Region and Linden in the Upper Demerara Berbice Region which benefitted from boats.

First Lady Sandra Granger has also played an active role in the programme, having received a number of donations herself and participated in several commissioning ceremonies in various communities. Among the many presentations made by the First Lady include the Barima Waini Region, Lethem in the Upper Takutu- Upper Essequibo region, Mahdia in the Potaro-Siparuni Region, and the Mahaica-Berbice and East Berbice-Corentyne Regions.

The First Lady has echoed the President’s sentiments in promoting education, empowerment, equality and enterprise through this initiative and has continued to spread the importance of the efforts being made into making Guyana an ‘education nation’. “When you go to school on time…you will be much more ready to absorb the education you are offered and so it is very important that your generation takes our country forward and moves us into the direction of progress and productivity,” the First Lady said. 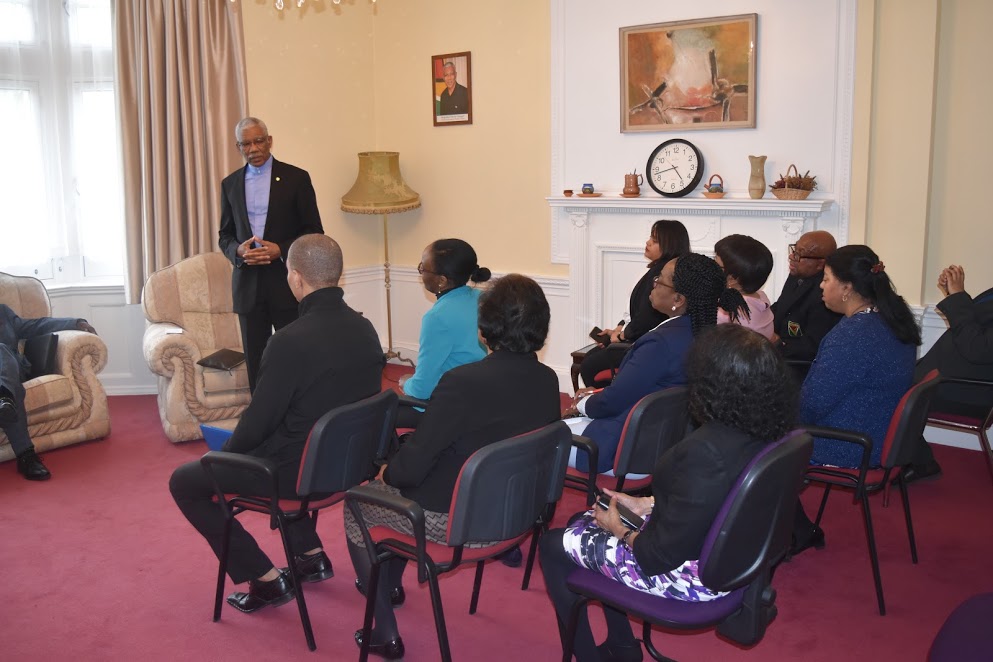 Throughout the span of the initiative, Minister of Social Cohesion, Ms. Amna Ally, has been acknowledged as playing an integral role in the 5 Bs Programme with regards to garnering support for donations and other important aspects of organising.

In an interview with Minister Ally, she stated that this initiative brings to life the President’s dream, and that it is just one of his many efforts toward empowering youth for the future through education. She also acknowledged the role that has been played by corporate citizens have played in helping to advance the initiative through their donations. She stated that while most of the focus has been placed on boats, buses and bicycles, the recent addition of books and bicycles has opened the opportunity for programmes to focus on those aspects, and as time unfolds this too will grow.

Minister Ally said too that having consulted with areas that have since benefited from the project, the results have been promising despite minor teething problems. “The residents have welcomed the initiative. In some areas they are so heartened with the project that they are seeking to put up bus sheds for the children to assemble. As for the mechanical problems that we have been having we have been able to deal with them quickly and easily,” she said.

The Minister added that she is proud to be part of what she referred to as a project that could have only been implemented by a visionary President, and looks forward to the project spreading its wings in other parts of the country.

But despite the widespread success, the 5 Bs Initiative has also come under some criticism. There have been those who have called it a political gimmick. However, President Granger, on an episode of The Public Interest in April, said that the 5 Bs programme fulfills a dire need and that it will save parents a significant amount of money as it relates to school expenses. “I was very disappointed when people made those criticisms. It is a public good and I will continue to increase the transportation for the school children. The state is not involved. It is not going into the state’s coffers. Maintenance is also being done at a regional level. This is not a central government task alone. In my charge to individual Mayors, I said get the children to school please make that a priority,” the President said.

With the municipalities involved, the provision of transportation then becomes a project that is managed at various levels, which brings additional assurance that children get the access to the facilities. Within the coming months, the 5 Bs Initiative is slated to be taken to communities in the Essequibo Islands –West Demerara as well as Mabaruma in the Barima Waini Region and communities in the Pomeroon Supenaam Region.

As more private sector partners come on board, the President intends to spread the initiative to even more communities around the country in an aim to continue in his dream of Guyana becoming an ‘education nation’.