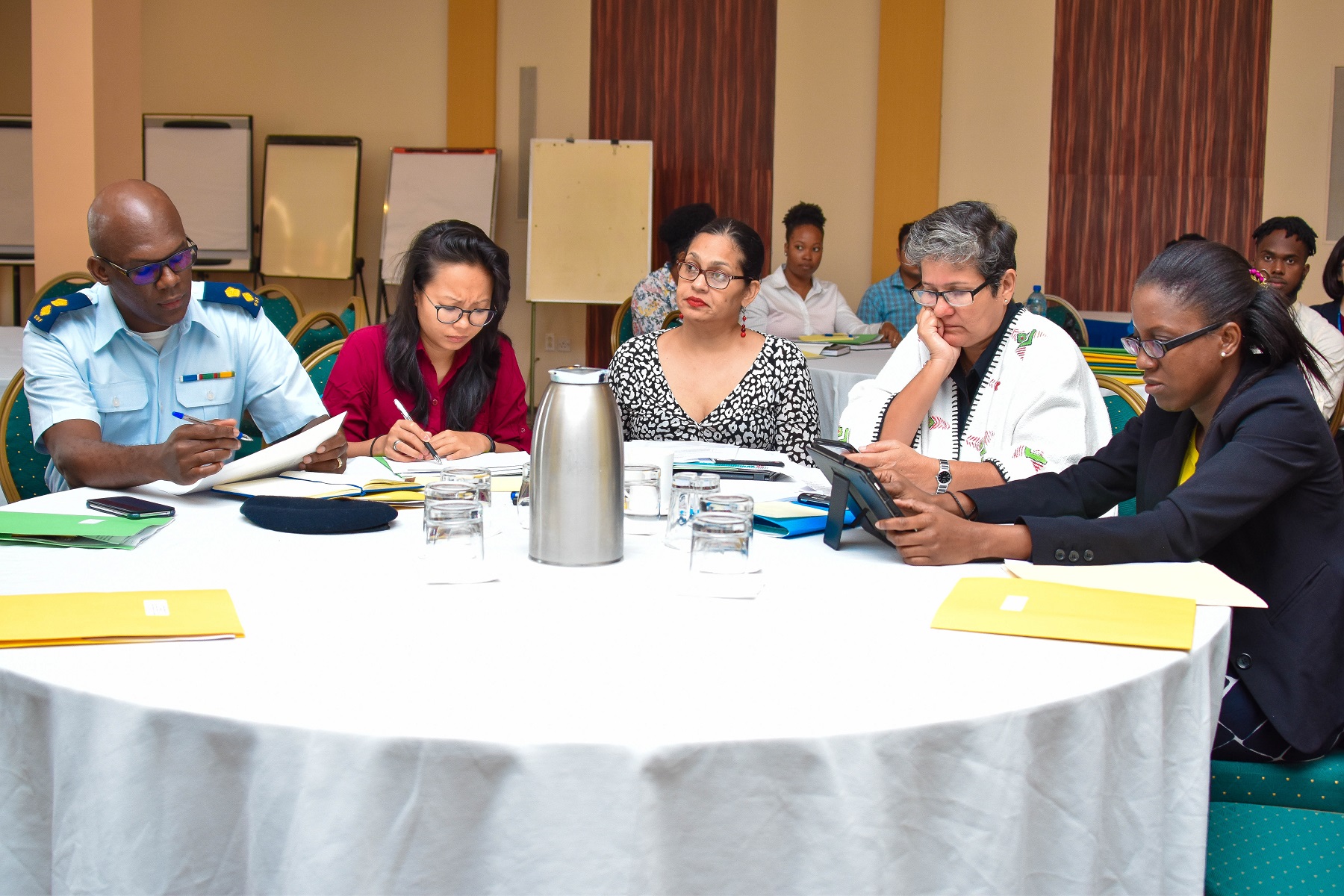 Georgetown, Guyana – (June 17, 2016) As an additional 59 young people, graduated from the Youth Leadership Training Programme, Technical Facilitator to the Minister of Education, Mr. Vincent Alexander urged the group to be the type of leaders who work tirelessly for the good of their communities even as they pursure their own career goals.

The ceremony was hosted at the Madewini Training Centre, located just off the Soesdyke-Linden Highway, and brings to an end the second in eight such training sessions, which will be held this year, aimed at honing the leaderships of young people throughout the ten regions of Guyana. The participants hailed from Regions Two, Three, Four, Five, Six and 10 and are members of youth organisations from within their communities.

In his keynote address, Mr. Alexander spoke on what he believes it takes to make a good leader. He advised that good leaders carry out their duties without looking for a reward. He stated that as leaders, they will be expected to give specific guidance with regards to ideas, vision, organising and mobilising. He added that in carrying out these things, it should be in a manner that shows that they truly enjoy what they are doing, rather than just doing it for an ulterior motive.

“I’m not saying leaders shouldn’t be rewarded but as leaders you should be inspired not by the possible reward but by the fact that you love what you are doing and you’d like to see the results of what you’re doing in the community in which you operate. If you give good leadership you will make a difference to your club and community. And the difference which you will make will impact you because you are part of it,” he said.

Ms. Adeti DeJesus, of the Office of the Presidential Advisor on Youth Empowerment presents a certificate to one of the participants at the graduation ceremony

He advised the participants to be aware that as leaders, also, their behaviour will be scrutinised, but that could work to their favour in ensuring that they do the right thing. “People will look upon you and make judgements of you and all that you do. So you have to be aware that your manner of conduct will come under scrutiny all of the time. And there is really no problem with that. It helps to keep you doing the right things, and you should not be annoyed or bothered by it, but influenced by it to ensure you are doing what is right, in addition to that general responsibility in your organisation,” he said.

Moreover he stated that their participation in the programme means that apart from being taught valuable leadership and other skills, they have also been given an “Guyana experience” in which they have been exposed to people of different cultures and backgrounds that may otherwise not have been afforded to them.

“An occasion like this gives us the opportunity to have that exposure and to overcome a lot of the thoughts you may have about each other based on what the older people may have said to us. I do hope that your presence and opportunity has provided you with a wider and richer Guyanese experience, which may not be what you get in your everyday life because of where you live. And that you take that experience back to your community and always remember that as you proceed to be involved in leadership,” he said.

He expressed hope that the participants will eventually be able to get a full geographic experience of Guyana so that they can learn as much about their country and develop an even greater love for it. 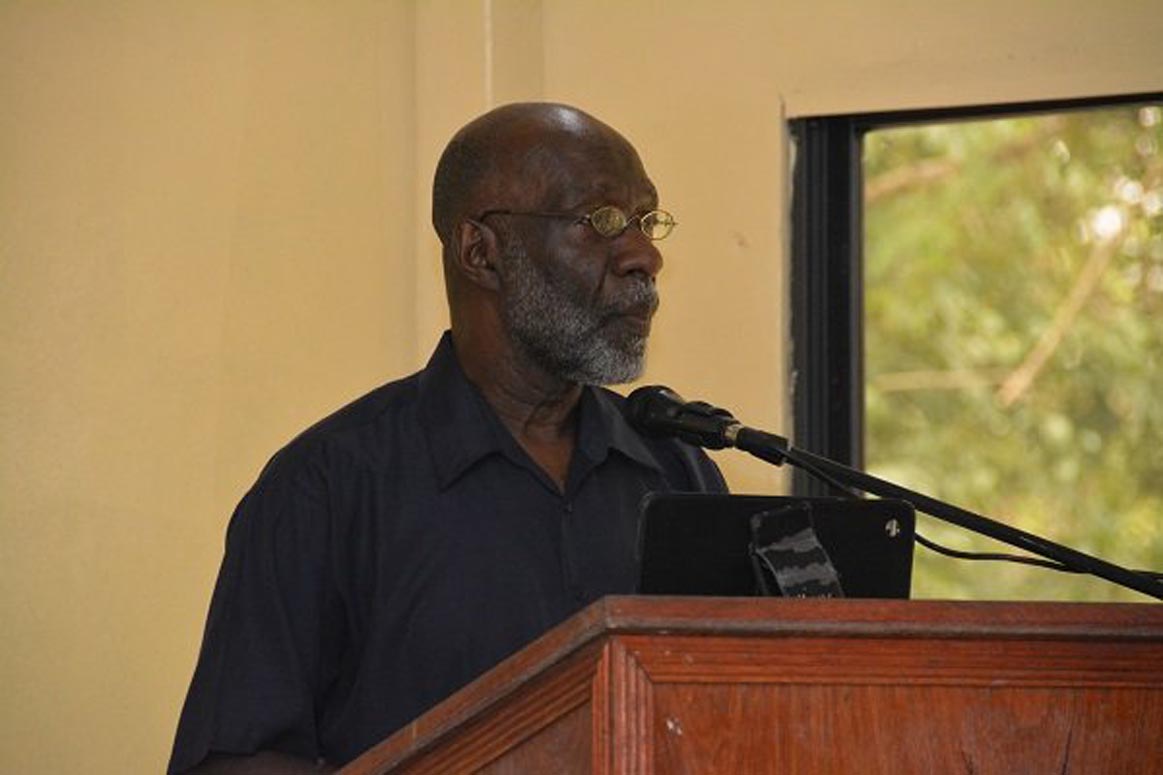 Technical Facilitator to the Minister of Education, Mr. Vincent Alexander, during his address at the graduation

Presidential Advisor on Youth Empowerment, Mr. Aubrey Norton, who is spearheading this initiative, gave an overview of the programme, stating that the structure of the sessions included aspects of leadership, management, event planning, basic psychology, group dynamics, team building, problem solving, decision making, communication and effective speaking. Parts of the session also catered to practical lessons in hopes of merging theory and practice so that the participants could get to apply what they learned.

“This programme emerged because in visiting across the country, we found there are a lot of young people with potential to become leaders but there is the absence of leadership training. So Presidential Advisor on Youth Empowerment Unit designed this course so young people could benefit,” Mr. Norton said. He stated that this is the first of three modules of the leadership training, and that the participants will return for the second module, which will hopefully be held later this year. “We hope that you will utilise the training to maximum and ensure that you impact on the youth in your community,” Mr. Norton said.

At the end of the presentation, each participant was presented with a certificate and awards were also distributed to participants who were chosen from among their peers for the Best Exemplified Leadership and Most Outstanding Personality awards.

This programme is one part of a larger thrust toward youth development and aims at targeting youth from across the country. Youth from the hinterland communities will begin to benefit from these programmes as early as July. With the white paper for a National Youth Policy currently being reviewed, many such initiatives are in the pipeline- some of which have already begun to be executed. Among these include a three-month Heavy Duty Operator training programme currently being conducted at the Kuru Kuru College, as well as other upcoming programmes aimed at providing skills training for youth that could assist in employment.