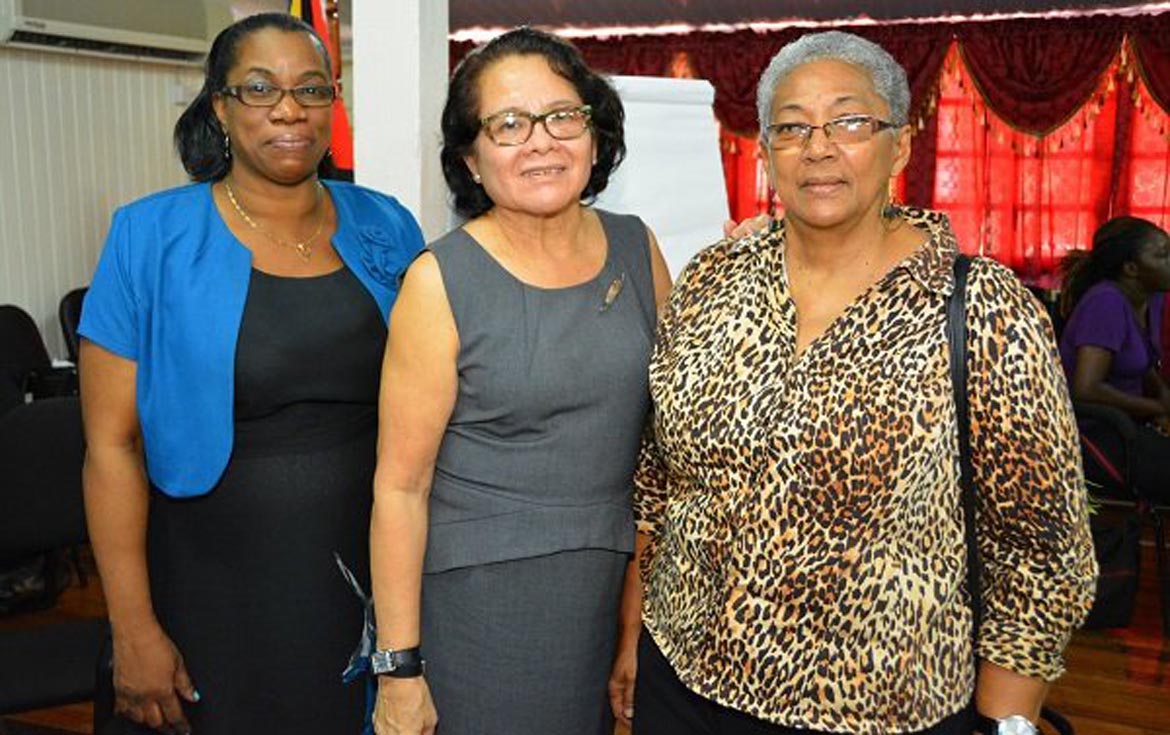 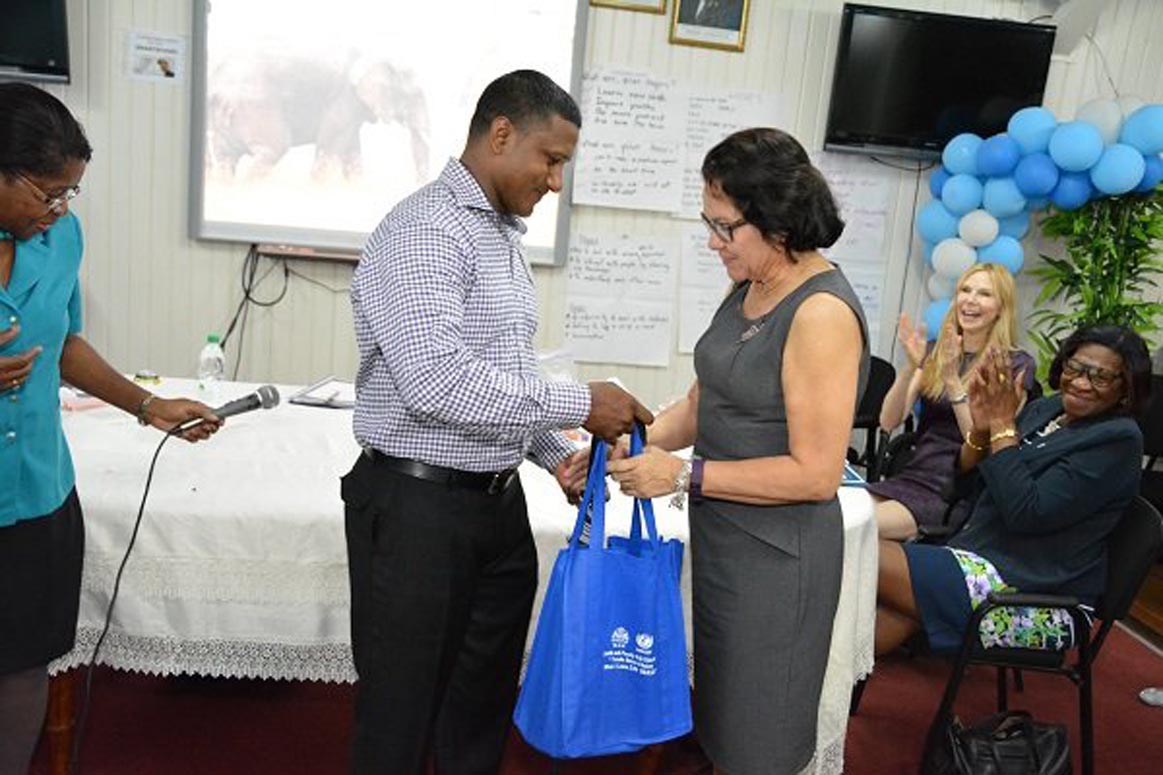 Mr. Vickram presents a token of appreciation to First Lady, Mrs. Sandra Granger, at the close of the session. NCERD Director, Mrs. Jennifer Cumberbatch is pictured in the background (left) while Ms. Randy Taran of Project Happiness and Colonel (ret’d) Yvonne Smith (background right) are pictured cheering the presentation.

In an invited comment, the First Lady said her participation in the programme is linked to her collaboration with Mr. Ernie Ross, Guyana’s Consul General in Trinidad and Tobago, on ReThink’s Kind Soles programme, which donated hundreds of pairs to shoes to students in the hinterland area.
ReThink’s Project Happiness, aimed at empowering persons to be empathetic and to live contentedly, also sparked the First Lady’s interest as she is interested in “recreating a Guyanese society that practices compassion”.

Mrs. Granger said she is pleased about the training, noting that it will “equip participants with the skills to encourage and empower beneficiaries, particularly children in schools as children who feel good about themselves are less likely to commit suicide.”

The Project Happiness Train the Trainer Course comprised nine lessons designed “to improve children’s focus, emotional resilience and their ability to make better life decisions.” The format of the worship included presentations from the trainers, general interactive sessions and small group interactive sessions where participants were allowed to practise skills such as empathy and appreciation. 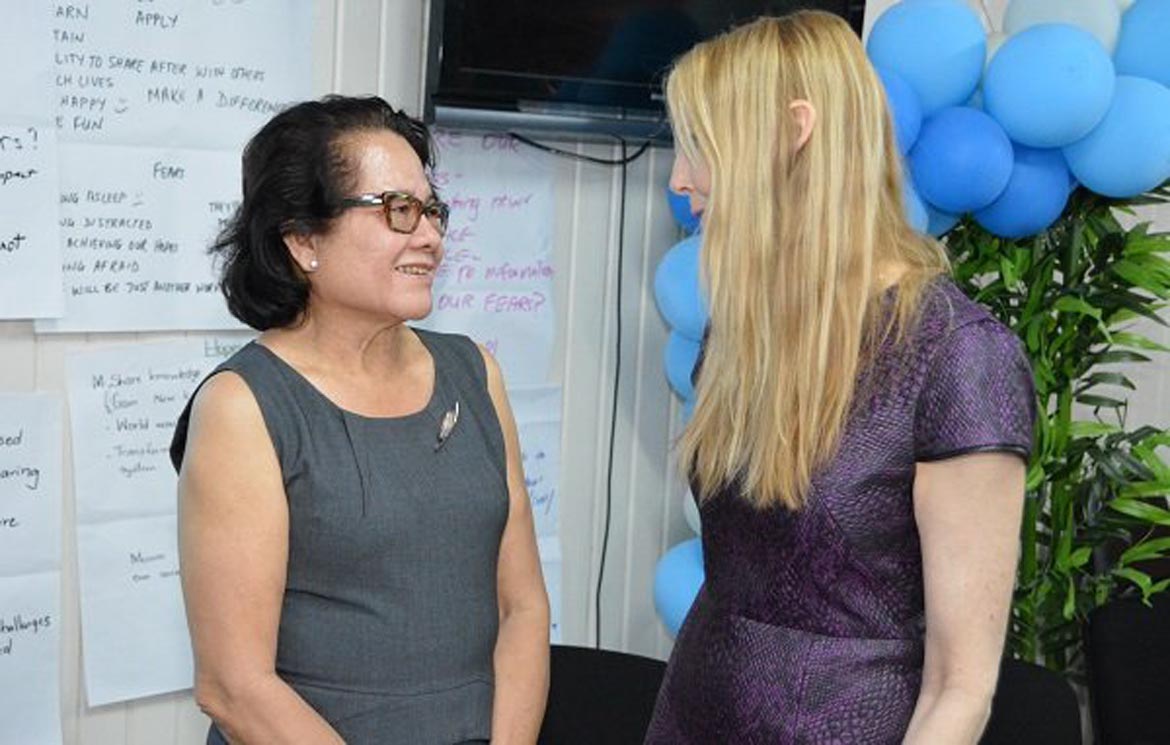 Mrs. Sandra Granger and Ms. Randy Taran of Project Happiness, in discussions during the lunch break.

Ms. Dorff, who conducted one of two major training exercises today, said that the link with the First Lady is “vital” as she is passionate about enhancing the lives of Guyanese, particularly children and other vulnerable groups, and her influence “will broaden the reach of the programme from just schools to countrywide.”

The programme aims “to give students and teachers the tools for emotional resilience and to teach persons how to deal with all kinds of emotions”, she said. The group was invited to host the sessions, and the skills taught will be used to augment the Ministry’s programmes aimed at reducing the incidence of suicide, she added.

The Ministry’s involvement in the training stemmed from an invitation Mrs. Granger had extended to Mrs. Evelyn Hamilton, Chief Planning Officer at the Ministry, to the first presentation of shoes from ReThink, last year. Mrs. Hamilton then introduced the programme to the Ministry, to determine how it could be incorporated into the schools’ programme, she said.
Mrs. Colleen Cameron, Health and Family Life Education (HFLE) Coordinator at the Ministry, based at the UNESCO building in Georgetown, noted that the training is happening at an opportune time. The Ministry is currently revisiting its HFLE curriculum for Grades 1 – 9 and is developing its curriculum for grades 10, 11 and nursery children, she said, adding that the skills taught during the workshop will be integrated into the HFLE curriculum. Mrs. Cameron expects that the programme will be introduced at the start of the new school term on April 4, after the students would have returned from their Easter holiday break.

Meanwhile, Mrs. Jennifer Cumberbatch, Director of NCERD was heartened by the participants’ enthusiasm during the training and encouraged them to “find exciting ways to get children’s attention”. According to Mrs. Cumberbatch “each teacher, NGO who conducts this programme, will impact the recipients’ lives and, with regard to children, foster learning.”

The participating NGOs are also expected to use their knowledge that they’ve acquired from the workshop to serve their focus groups and wider communities.

Mrs. Deborah Blackmore, a representative from the Guyana Foundation, of which the First Lady is patron, and the Bernice Mansell Foundation, said the training has given the volunteers the skills that they need to boost the self-confidence of the persons whom they serve.

She said she plans to immediately incorporate what she has learnt into the Literacy Programme that the Bernice Mansell Foundation hosts for school dropouts, where she is a volunteer teacher. Mrs. Blackmore believes that the sessions have taught her how to improve children’s emotional resilience, a skill she views as crucial when treating troubled children and which she plans to now use “to boost their self-esteem and to encourage them to want to learn”.

Similar sentiments were expressed by Ms. Uso Telford, of the Buxton Arts Theatre. Ms. Telford said she works with many young persons and expects the training to “better my relationship with them.” She hopes to use her newly acquired skills to “motivate them to make positive life choices”.

Meanwhile, Mr. Vickram, one of only two male participants in the programme, in delivering the vote of thanks, expressed gratitude to the First Lady for her support. He added further levity to the sessions by reciting a poem he had written in honour of Mrs. Granger expressing the admiration he and the country at large, feels for her. The First Lady thanked the group for the gift and expressed high hopes about the future outcomes of the workshop.

President meets with Head of CDEMA