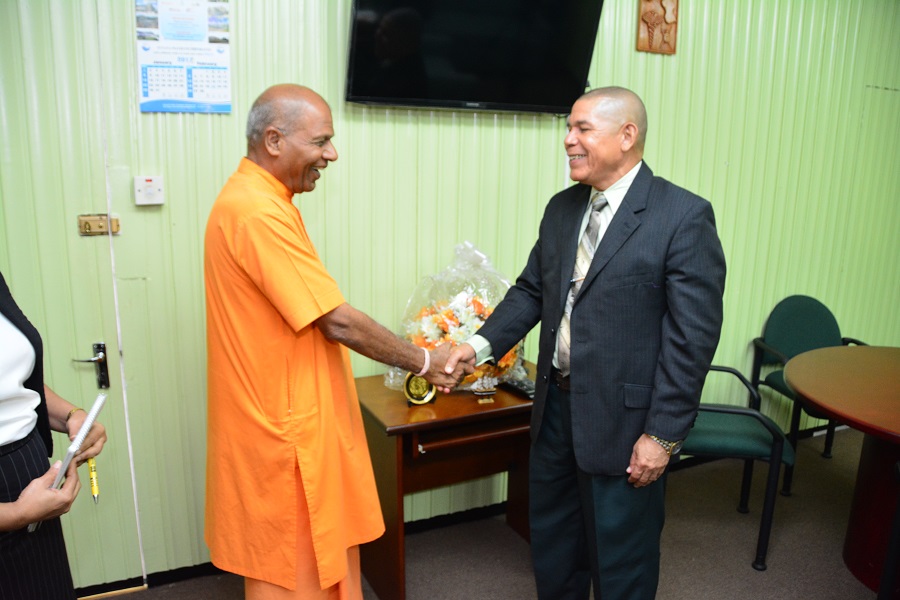 Georgetown, Guyana – (February 26, 2016) First Lady, Mrs. Sandra Granger, yesterday, met with a representative of the Guyana Foundation, a team from Starkey Hearing Foundation and a representative from the Ministry of Health, to discuss strategies for the implementation of a programme to outfit persons who are hearing impaired with hearing aids.

Mrs. Granger said her participation in the programme is linked to her being patron of the Guyana Foundation, and she “is very happy to work with bonafide organisations that are going to help the people of Guyana.”

While this is her first meeting with representatives of the Foundation, Mrs. Granger first met Co-Founder, Mrs. Tani Austin at the First Ladies Summit, during the 70th Session of the United Nations General Assembly in New York, USA, last year, who had indicated an interest in bringing the programme to Guyana.

“Starkey Foundation’s programme provides hearing and they are working with the Ministry of Health and other organisations to provide the gift of hearing to persons hearing impairments, particularly our children and senior citizens,” Mrs. Granger said.

Meanwhile, Mr. Autar told the Ministry of the Presidency that the Guyana Foundation, together with its partners, plans to implement the first phase of Starkey’s four-part programme this year.

The four phases of the programme include: patient identification, which conducts community outreaches and provides primary ear care services and hearing screenings to identify potential hearing device candidates; a hearing mission, where the hearing device, custom ear moulds and batteries are provided for beneficiaries; an aftercare programme, where recipients benefit from services such as repair and replacement of the hearing devices, batteries and additional counselling and a mainstream into life programme, where support is given to schools for persons who are deaf or hard of hearing to implement speech and language therapy for students who have progressed to the level of their hearing peers with the overall goal of helping them to connect with their communities. 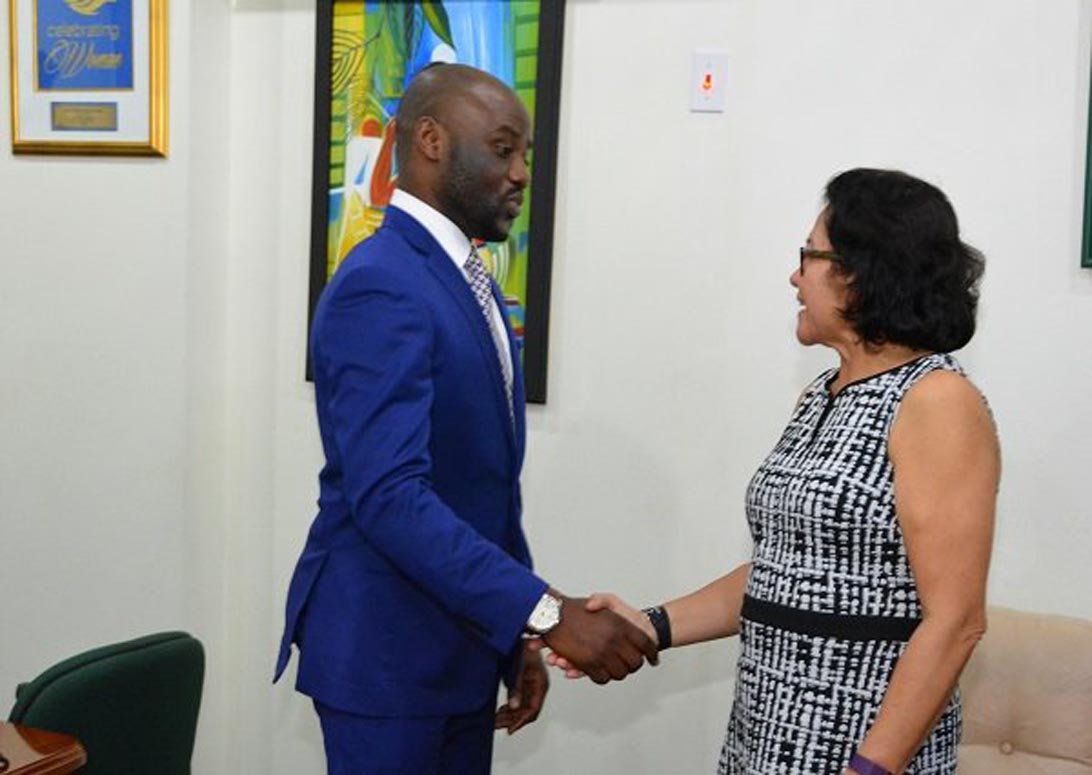 In an invited comment Dr. Luqman Lawal, Starkey’s Manager: Research, Monitoring and Evaluation, said the Foundation is here to establish its office in Guyana and to set-up a committee, based in the health care programme, with the goal of providing every single Guyanese with a hearing problem with free hearing aids. He estimated that about 40, 000 persons can benefit.

“We want to be able to work with local partners so that after identifying the patients, we’re able to give them free hearing aids and the local partners are able to follow-up on these patients and fix any problems they might have with the device. [They will also] be able to follow-up on their progress as regards education, employment and the improvement in their quality of life,” Dr. Lawal said.

Since the group arrived in Guyana on Monday, members have already met with the Ministers of Health, Indigenous Peoples Affairs and Education to set-up strategy partnerships; and with the Lions Clubs, which will provide support during the execution of the programme, Dr. Lawal said. He anticipates that Starkey Foundation will be starting the first phase of identifying patients in June.

According to Dr. Lawal, the group is particularly interested in garnering the First Lady’s support in mainstreaming the beneficiaries into life. “Some of them (the recipients), after having been fitted with a hearing aid, should be able to get good lives, get good employment, acquire good skills so as to be able to be mainstreamed into their daily lives,” he said 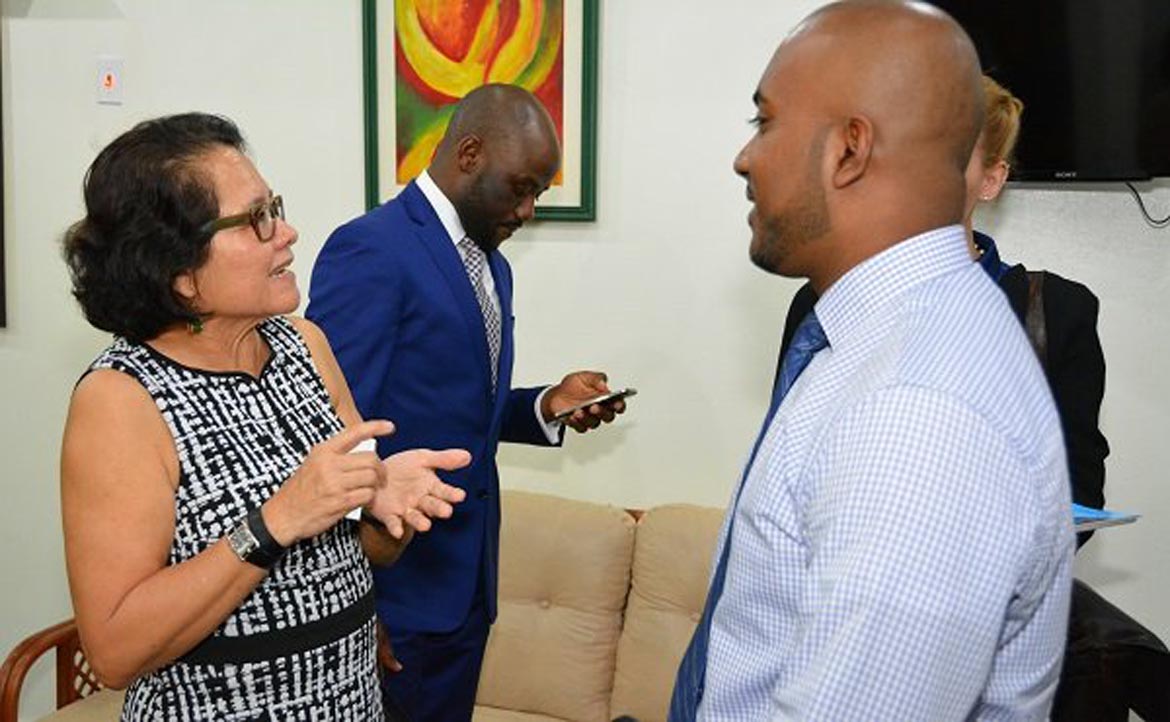 Apart from that, Dr Lawal said, Starkey Foundation is particularly interested in working with children “as after having been outfitted with the hearing aids we found a lot of them do well in conventional schools. So after giving them hearing aids we hope to be able to mainstream a number of them to conventional schools to maximise their potentials.”

In addition, Dr. Ruth Quaicoe, Head of Audiology in Guyana, said the GPHC and the Ministry of Health have already identified a number of persons who are expected to be among the first beneficiaries. The recipients will be drawn from those registered at the Ministry’s clinics across the country. There are clinics in all but Potaro-Siparuni (Region Eight), but plans are in train to soon remedy this, she said.

Dr. Quaicoe is encouraging members of the public who suffer from hearing loss or who experience difficulties hearing or are aware of persons, particularly children, who may be suffering from hearing loss to register for screening. She noted that the screenings are free and, for those who may need a hearing device, the instrument is also free of cost.

According to Dr Quaicoe, the Ministry is partnering with all non-governmental organisations and other groups who provide services for persons with hearing impairments to ensure that every person is served.

The Guyana Foundation is a charitable trust founded by Ms. Supriya Singh-Bodden, CCH, which co-ordinates, conducts and partners with like-minded groups to carry out small and large-scale projects countrywide to enhance lives and contribute meaningfully to the rebuilding of Guyana. Starkey Hearing Foundation, which is based in the United States, is a member of the Clinton Global Initiative and is the largest charity globally which conducts free hearing missions around the world.