New GDF officers must embrace the hallmarks of service to citizens, community and nation – President says at Commissioning Parade 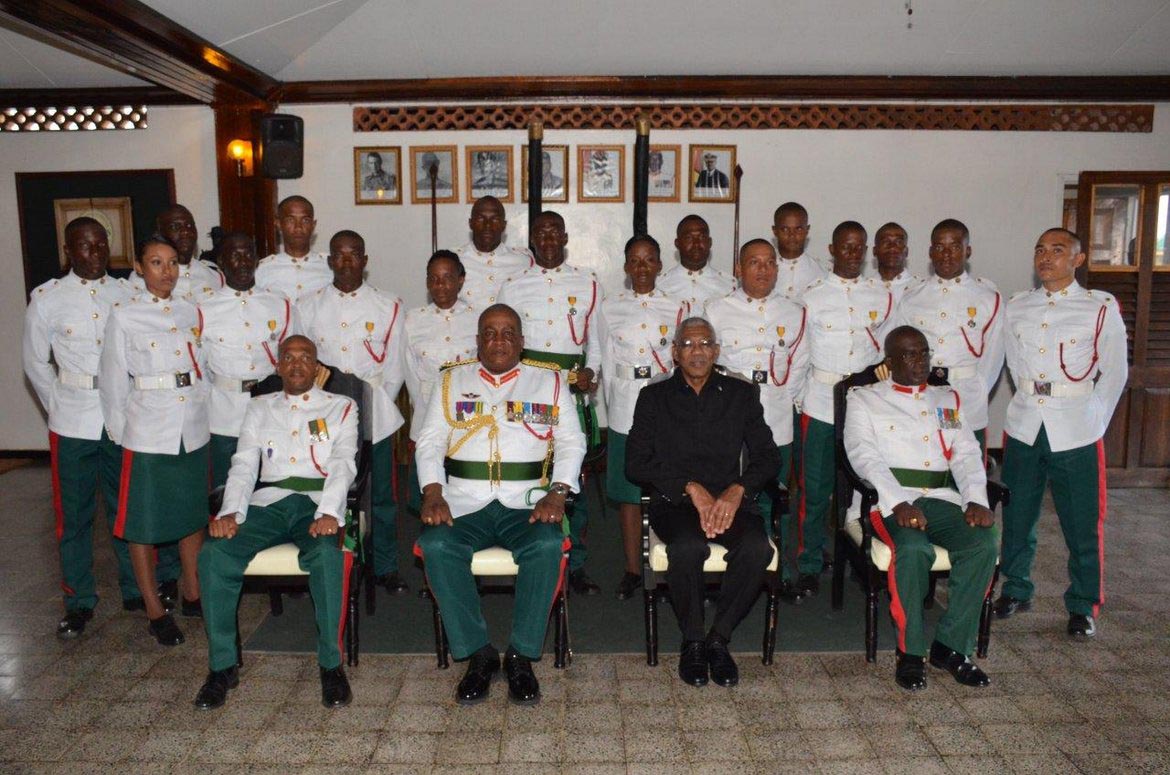 Georgetown, Guyana – (February 10, 2016) President David Granger, Commander- in-Chief of the Armed Forces of Guyana, today, urged the graduates of the Standard Officers’ Course 48 of the Colonel Ulric Pilgrim Officer Cadet School (CUPOCS) to embrace their new-found responsibilities, declaring that human safety, national security and most importantly, service to the community must become the hallmarks of their service to the nation.

Chief of Staff of the Guyana Defence Force (GDF), Brigadier Mark Phillips, Chancellor of the Judiciary (Ag), Justice Carl Singh, former Chief of Staff of the GDF, Commodore Gary Best, Minister of Natural Resources, Mr. Raphael Trotman, British High Commissioner to Guyana, Mr. Greg Quinn, Cuban Ambassador to Guyana, Julio Cesar Gonsalez Marchante and the families of the new Officers were among those who attended the Commissioning Parade of graduates, which was held at the GDF Base Camp Ayanganna playfield on Vlissengen Road.

President David Granger and the Graduating Class of the Standard Officers’ Course 48. Chief of Staff of the Guyana Defence Force, Brigadier Mark Phillips is seated second from left.

“You, the newest Officers of the Guyana Defence Force, now possess Instruments of Commission, which constitute the legal authority appointing you as second lieutenants,” President Granger said. “Those Instruments allow you to fulfil your responsibilities to our country, our citizens and our communities. Those responsibilities are outlined in the Constitution of the Cooperative Republic of Guyana, which stipulates: “The State’s defence and security policy shall be to defend national independence, preserve the country’s sovereignty and integrity and guarantee the normal functioning of institutions and the security of citizens against any armed aggression.”

While the GDF is mandated to protect the nation’s sovereignty and to help maintain law and order in the society, ranks are also expected to serve their communities.

“The Guyana Defence Force, for half of a century, has been the sword and shield of our homeland. It has protected us from danger. It has suppressed revolt. It has repelled incursions. It has deterred would-be aggressors. The Defence Force has admirably guarded our nation’s skies, our waters, our territory and our patrimony. The safety of our citizens is the most important task of the State. Our people must enjoy security in their homes and communities. Service to our communities, especially in times of disaster and emergencies, is another responsibility of the State. The Defence Force, again, has always come to the rescue,” the President said. 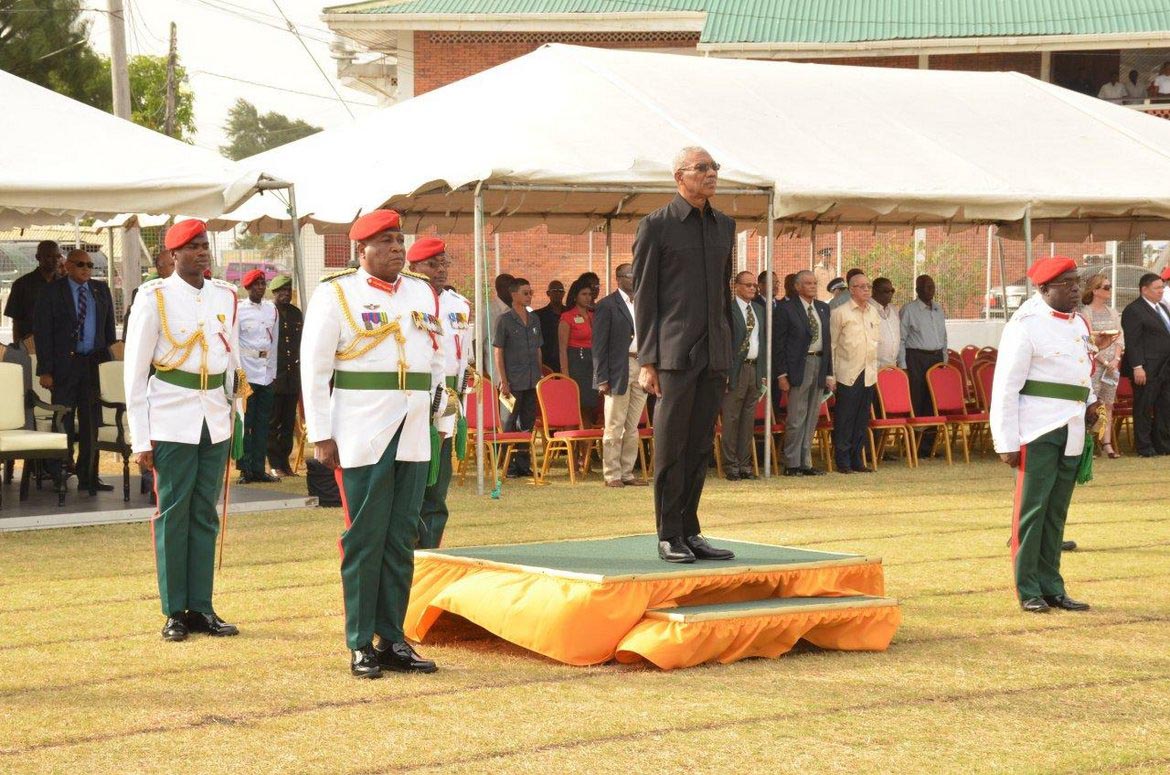 Commander-in-Chief of the Armed Forces, President David Granger at the Commissioning Parade for graduates of the Guyana Defence Force Standard Officers’ Course 48, at the Base Camp Ayanganna playfield earlier today. Army Chief of Staff, Brigadier Mark Phillips is pictured at the president’s right.

In this regard, the President said, the Administration has taken steps to strengthen the Force’s Engineer Corps, which will aid in the construction of bridges and roadways in the Hinterland regions to bridge the gaps between the Coastland and the Interior areas, and to re-establish the People’s Militia.

“We have also reactivated the Guyana People’s Militia which, as the Reserve Force, can be deployed to render assistance to our regional administrations and communities in times of emergency. The Militia will be the citizens’ army. It will be based in communities in every Region of our country to keep those communities safe. A Civil Defence Corps, under the Civil Defence Commission, will be established to assist in times of environmental hazard,” the President said. 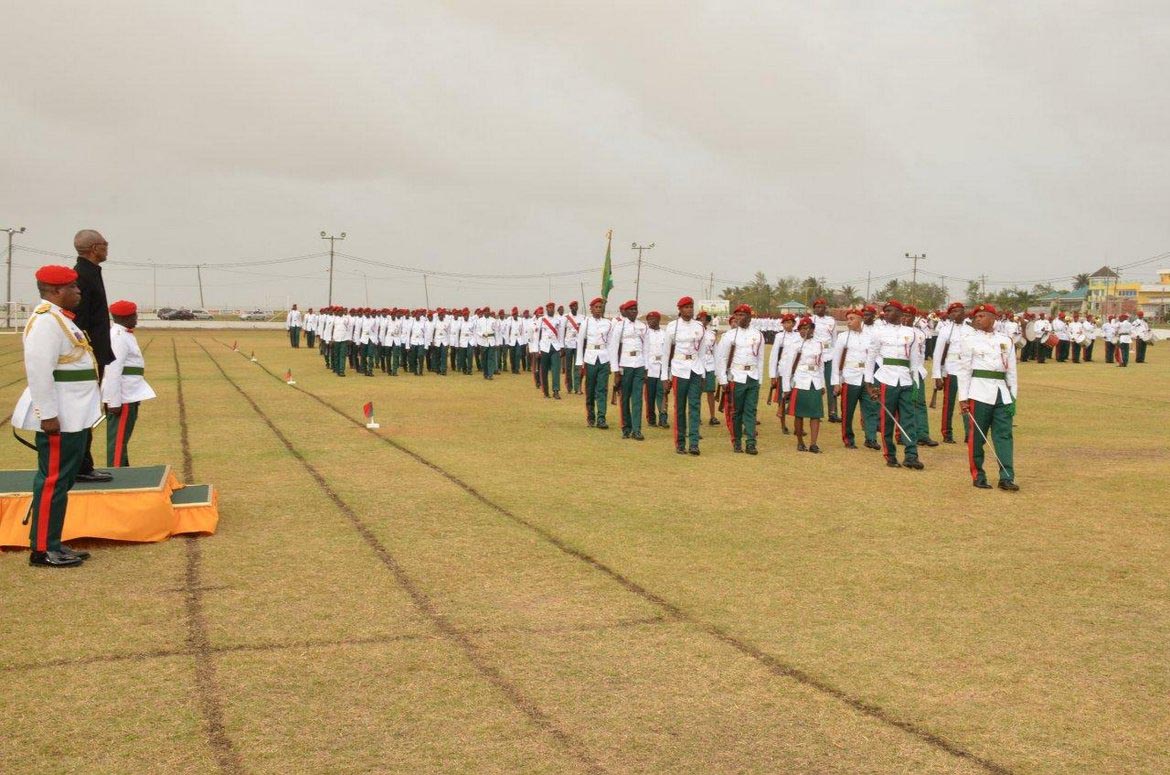 Commander-in-Chief, President Granger receives the Presidential Salute from the Officers of the Guyana Defence Force’s Standard Officers’ Course 48 at the Base Camp Ayanganna earlier this evening.

He charged the new officers to uphold the mission and responsibilities of the Guyana Defence Force to the highest standard.

“The nation looks to you to ensure the security of our country, the safety of our citizens and to provide service to our communities… You – young Guyanese men and women – are expected to undertake these responsibilities while upholding the six core values of service, loyalty, discipline, honour, trust and courage,” he said.

Two Belizean officers and one from St. Kitts and Nevis were among the 20 graduates. President Granger said that this was a symbol of Guyana’s commitment to regional integration, which is needed for the protection of small states.

“Guyana’s foreign policy is to foster closer relations among the Defence Forces of the Caribbean. We are committed to collaborating with each other to ensure the security of small states and to guarantee that this Region remains a zone of peace,” the Commander-in-Chief said.

According to the GDF, the Standard Officers’ course was developed to provide training, not only for new Army Officers but also for new Officers of the other services. The Course provides a solid foundation for the subsequent professional development of all Cadets entering the Guyana Defence Force.

The role of the CUPOCS is to train young potential leaders from the various local and regional disciplined services to serve their country through the development of good character and powers of leadership, instillation of qualities of discipline, initiative and self-confidence and the duties of citizenship, loyalty and patriotism, the army said. 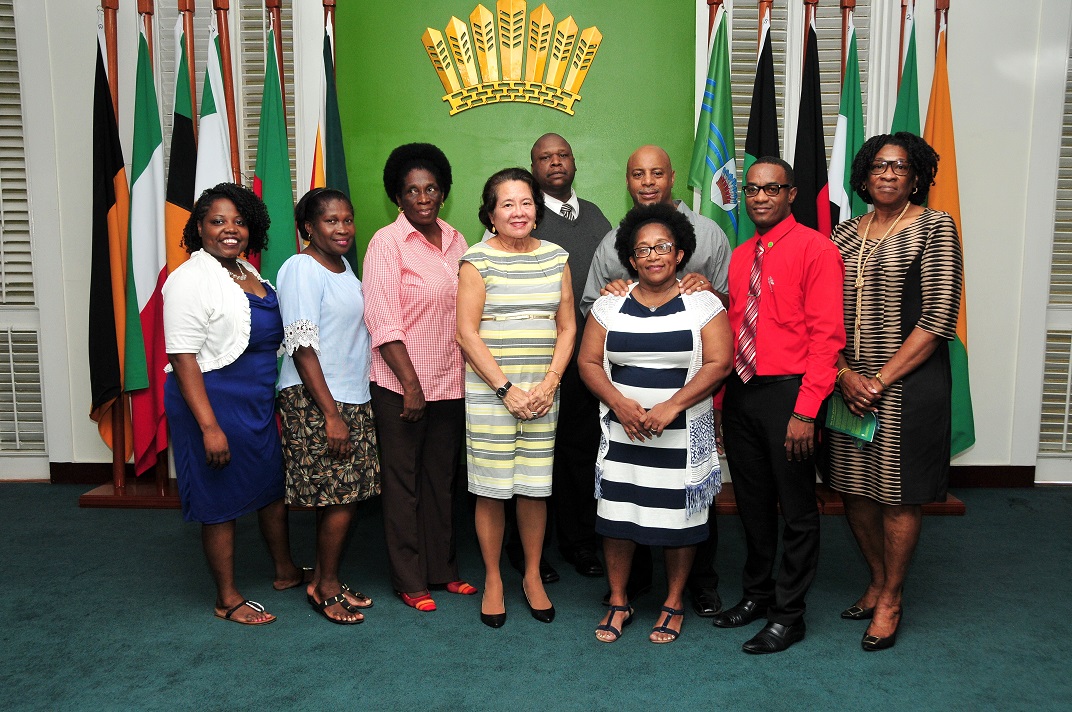 The Commander in Chief, President David Granger, bestows the Sword of Honour on Second Lieutenant Cleveroy Patrick, who is the Best Graduating Student .