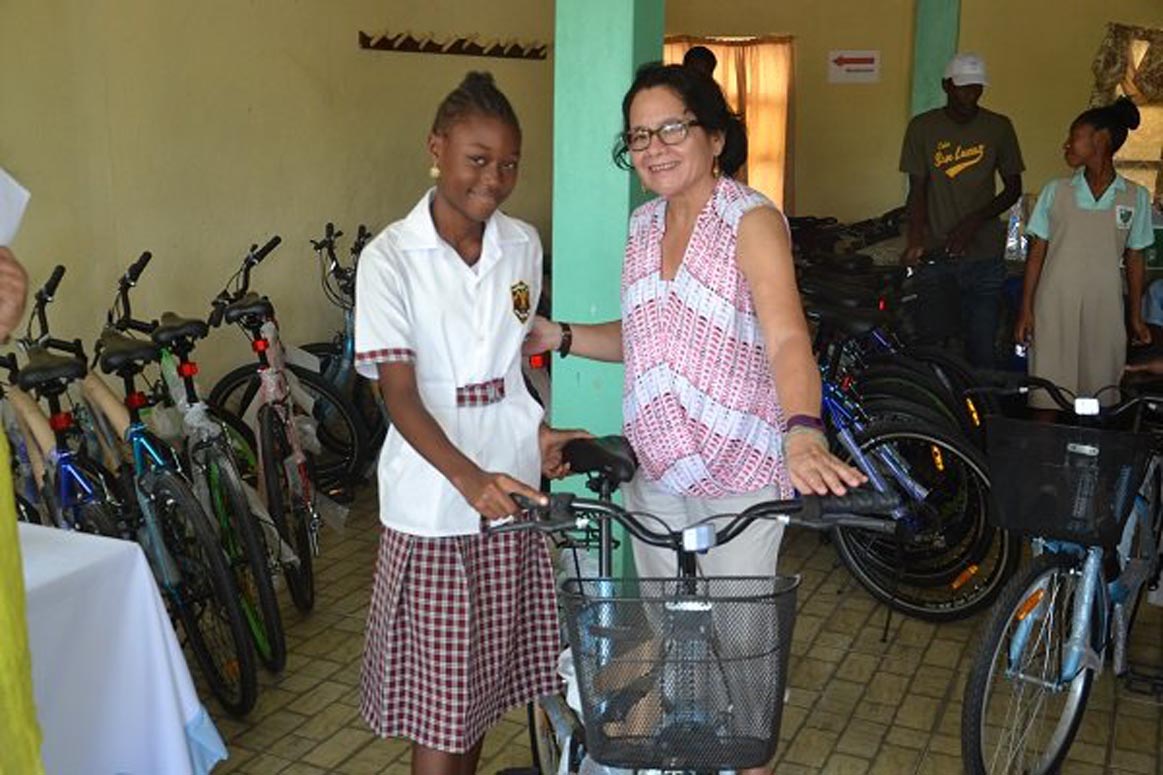 Georgetown, Guyana – (January 30, 2016) Another 50 students are now the proud owners of bicycles, presented to them today, under President David Granger’s “Boats, Buses and Bicycles” programme, in keeping with his policy to ensure that every Guyanese child has access to education.

Minister of Social Cohesion, Ms. Amna Ally and First Lady, Mrs. Sandra Granger, presented the bicycles to the latest batch of beneficiaries, who were drawn from the Timehri North area and Diamond/Grove, East Bank Demerara. Twenty–five bicycles were distributed at each of the two locations. The bicycles distributed today were donated to the programme by Courtney Benn Contracting Services Limited.

At the first presentation ceremony, held at the Timehri Prisons’ Sports Club, a large group of persons; including the recipients and their parents, warmly greeted Minister Ally and the First Lady upon their arrival. The Minister, who spoke at both ceremonies, recalled the genesis of the ‘Three Bs’ programme and the President’s mission to see every child in school.

“Our President has a passion for education. He wants every child in school. He wants an educated nation. He wants everyone to have a good life and we are doing our utmost to ensure that the children of this nation get access to education,” Minister Ally said. Speaking of the additions of breakfast and books to the programme, which will be done in the coming weeks, she said this course of action is being taken to lessen the factors that keep children out of school.

Eradicating inequities
Minister Ally also informed the gathering that bridging inequalities is a priority issue on the Government’s agenda, and that the President intends, through this programme, to ultimately give every school age child an opportunity to obtain a sound nursery, primary and secondary education.

“In many instances, it is not a case where our children don’t want to go to school, but because of poverty, and in many cases … [other] inequalities, [parents are hard-pressed to send them]. The tide has changed… we will ensure that… we will reduce poverty and inequalities and take Guyana to another level. We established the Ministry of Social Cohesion, and we have on our agenda, to bridge the gaps between the rich and the poor and [provide] a good life [for all],” she said. 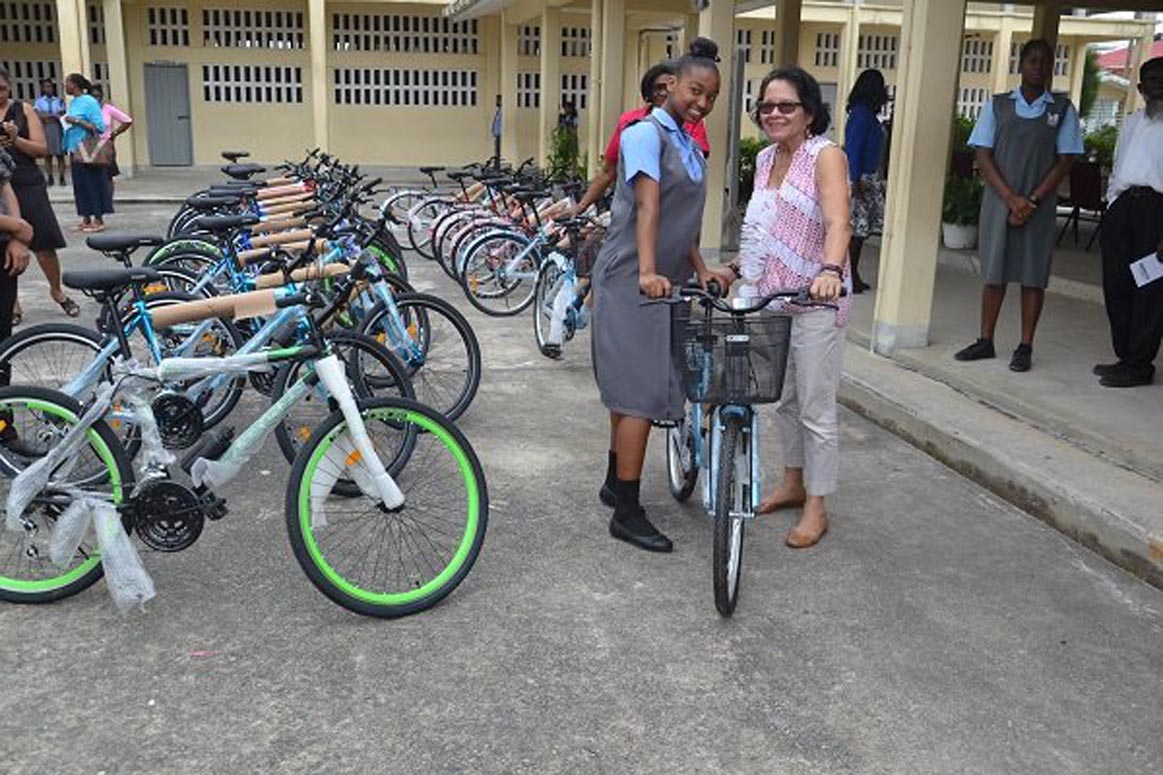 The Minister then urged the recipients to make the best use of the bicycles, even as she cautioned them to obey the rules of the road at all times. “I want you to care them (the bicycles); I want you to be safe on them. Have you ever seen a bicycle in the hospital, or a car? I am asking you to ride carefully at all times. Do not ride across the road to stop traffic,” she said.

The Minister further announced that today’s exercise is the beginning of more to come and entreated the gathering to be patient. “This is just a start…take your time, it is coming gradually. I am sure that you are begging to reach a stage where you will be proud of this new Government,” she said.

Minister Ally made a similar commitment at Diamond, even as she acknowledged that the area is rapidly expanding and the population is growing.

After being serenaded by a medley of National Songs by the Diamond Secondary School’s Choir, Minister Ally commended the students and informed them that the Government is committed to supporting these types of activities within the education system. Reference was made to the recent allocation in the 2016 National Budget for the enhancement of music on the schools’ curriculum. Against this backdrop, a general call was made for teachers to work with students to keep the symbols of nationhood alive in the school system. 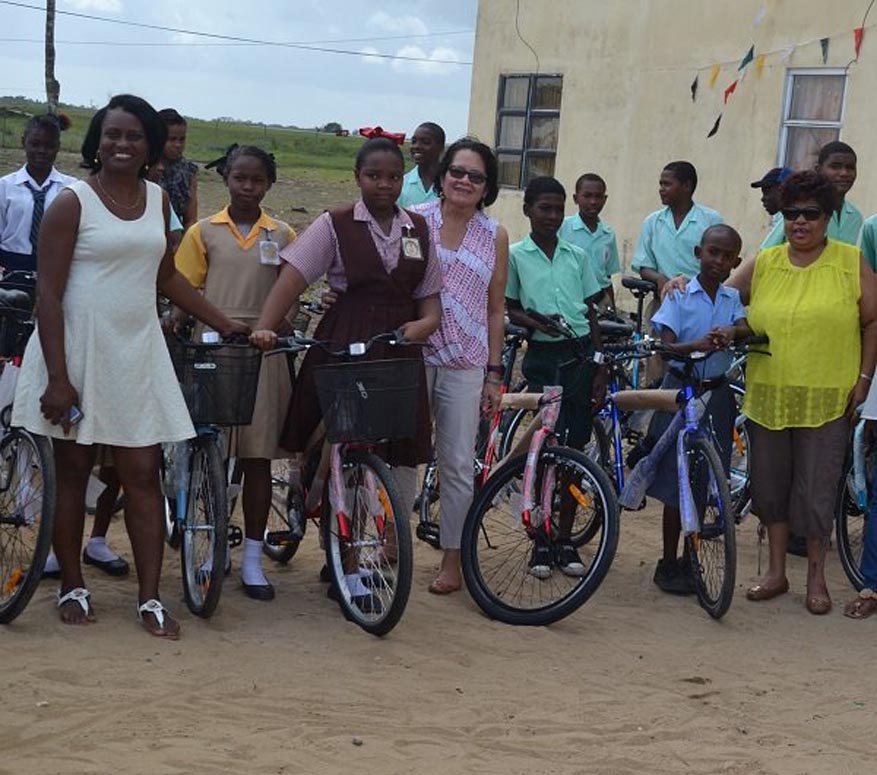 First Lady, Mrs. Sandra Granger (centre) and Minister of Social Cohesion, Ms. Amna Ally (second from right) pose for a photograph with some of the recipients and their parents at the Timehri Prisons Sports Club.

“In many of our schools, and along our commutes, we are not hearing our national songs. We were not seeing the respect given for our national symbols, but we must recognise our country’s Independence. We must recognise our National Symbols and sing our songs; our Government has made provisions for music education and appreciation, among other things, in the education sector,” Minister Ally said.

Meanwhile, First Lady, Mrs. Sandra Granger, said she was pleased to support the Ministry of Social Cohesion in executing the ‘Three Bs’ programme. She noted that the response to the initiative, both locally and from within the diaspora, is even more commendable. Mrs. Granger asserted that the public support so far is as a result of people being pleased to see the Government in action, particularly though this venture.

“When we get the bicycles, the buses and the boats, they don’t sit in somebody’s yard. As soon as we get them we make sure they go to the people they’re intended for,” Mrs. Granger said.

The “Boats, Buses and Bicycles” programme was launched when President Granger, during his 70th birthday celebrations in July 2015, made a call for assistance in getting children to school safely. Since then, there has been a tremendous national response with donations of boats, two 30-seater buses and numerous bicycles, which have all been distributed to Guyana’s most vulnerable students. Mr Ernie Ross, Guyana’s Consul General to Trinidad and Tobago, has thrown his weight behind the programme and, through the “Rethink Initiative-Kind Soles” project, administered by the Office of the First Lady, donated several pairs of shoes, which have been distributed to children in need in the hinterland areas. The project aims to provide 30,000 children with school shoes.

In addition, last weekend, during the commissioning ceremony for a school boat donated to the children of Region Ten, via the ‘Three Bs’ programme, President Granger announced that breakfast and books will be added to the programme, all aimed at lessening the challenges that keep children out of school. 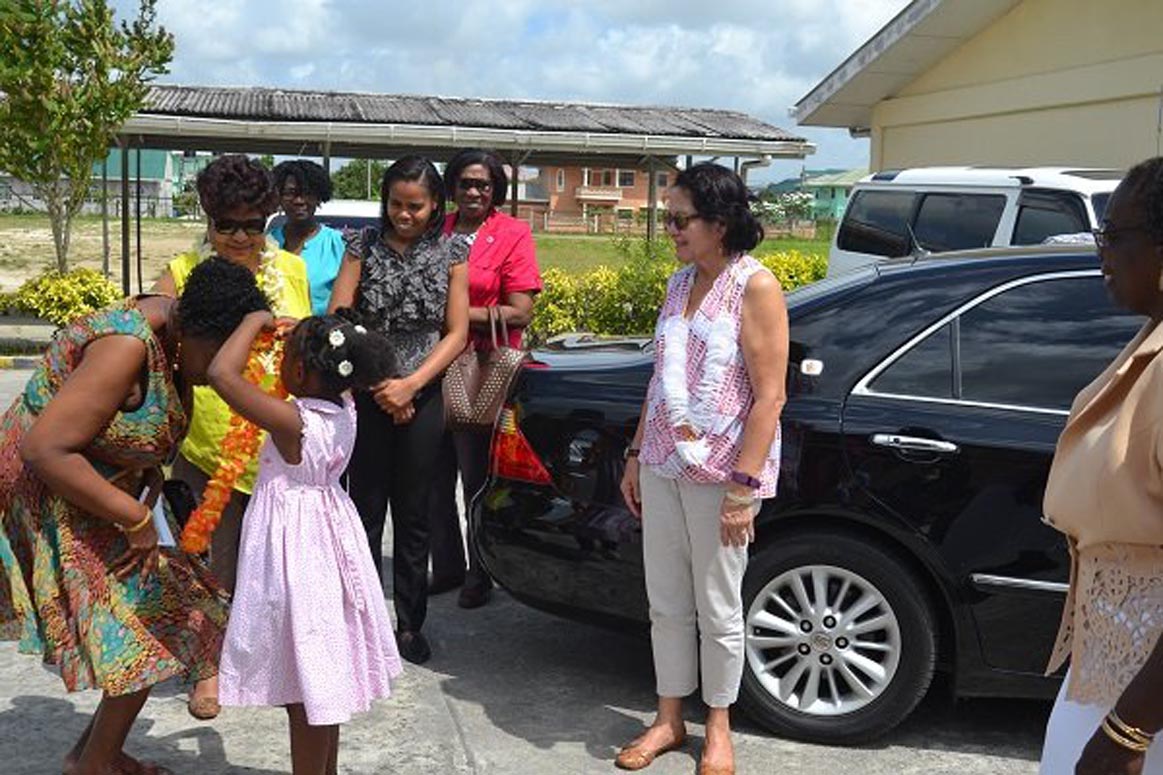 First Lady, Mrs. Sandra Granger (second from right), Minister of Social Cohesion, Ms. Amna Ally, (second from left), accompanied by Region Four Chairperson, Ms. Genevieve Allen, Ms. Jennifer Wade, and other supporters, smile as this little lass places a welcome garland around the neck of one of the team members, upon their arrival at the Diamond Secondary School, this morning.