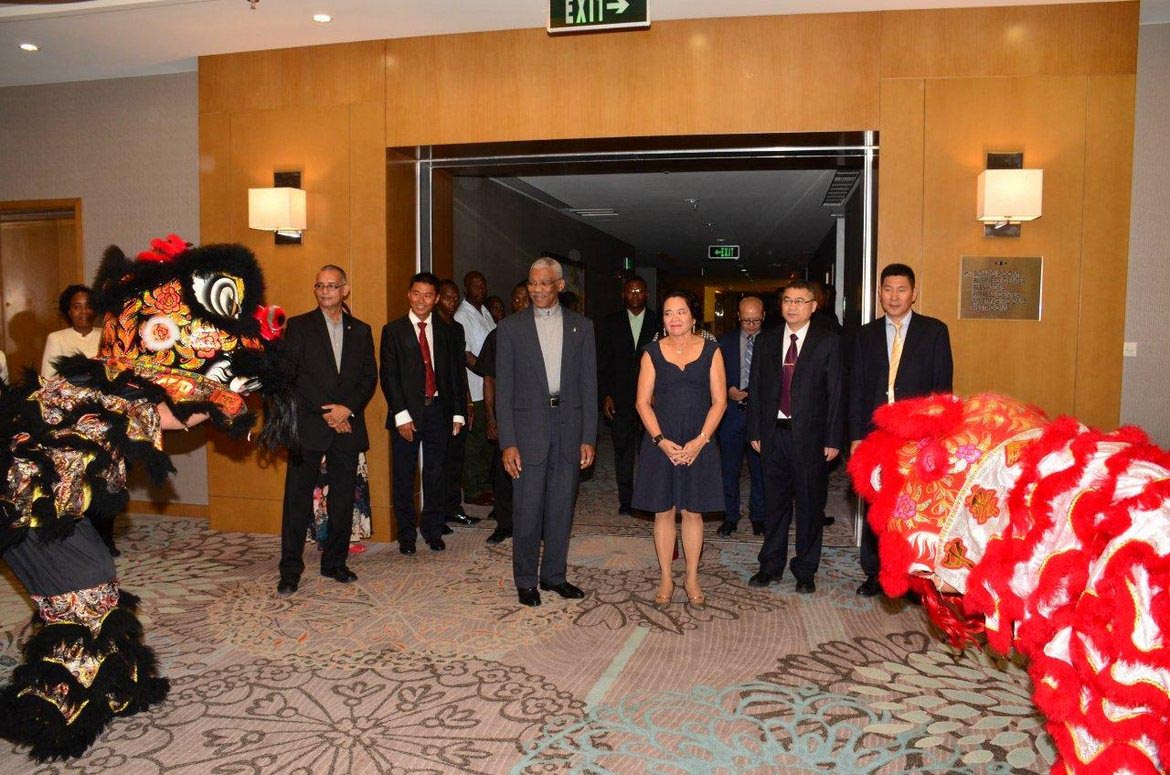 Georgetown, Guyana – (January 29, 2016) President David Granger said that his Government is committed to ensuring that Chinese investors have a fair deal in the local business arena. He was at the time delivering an address at a dinner and magazine launch organised by the Association of Chinese Enterprises in Guyana (ACEG). The event was held at the Marriott Hotel, Kingston.

Making reference to the 2016 national budget, which was presented to Parliament earlier today, the President said that Guyana is committed to creating an enabling environment for businesses to function.

“The 2016 Budget lays the foundation for growth, increased economic activity and greater competitiveness… it is a pro-business, pro-growth Budget. It also addresses important challenges within our social sector and the need to bridge the disparities between the hinterland and coastland and between rural and urban,” the Head of State said.

“Guyana, therefore, welcomes investors not only in trading, but also in agro-processing, energy generation, information technology and telecommunications, engineering, fishing, housing, mining, manufacturing and tourism. Everyone wins with a larger economy,” the President said.

He assured the Chinese business community of his Administration’s commitment to creating an enabling business environment; promoting thriving commerce and international trade by creating an enabling environment for investment; suppressing illicit trade; protecting the rights and freedoms of all people; providing infrastructure to enable freer faster and cheaper movement to the hinterland and the other sources of economic growth; and to ensuring a strong regulatory framework so as to secure fairness, quality, high standards and the protection of the interests of consumers.

Meanwhile, Chinese Ambassador to Guyana, Zhang Limin in his remarks hailed the friendly relations that Guyana and China has shared since establishing diplomatic ties 40 years ago. He noted that the Chinese companies in Guyana are not only promoters of Guyana-China economic cooperation but are also major participants in the development of Guyana.

The ACEG is a non-profit organisation that was established in 2014. Its membership consists of 14 Chinese companies in Guyana. Its main role is to assist Chinese investors and ensure that they operate within the confines of the Laws of Guyana and other regulations governing how business is done in this country. In addition to this, the Association has been very involved in charitable work in various parts of the country; conducting outreaches to schools and assisting orphanages and homes for the elderly. At this evening’s event, it made a donation to the Shaheed Children’s Orphanage and the Palms Geriatric Home.

Chairman of the ACEG, Andrew Jin explained that since the establishment of the Association, the business magazine has been an annual publication. It is divided into two categories. The first provides information on Chinese businesses in Guyana and caters specifically to Guyanese readers and the second provides information on how to conduct business in Guyana. This section caters for Chinese readers and potential investors.

The Chairman added that Guyana has great potential for achieving greater economic development and believes that the Association can play a critical role in this regard.