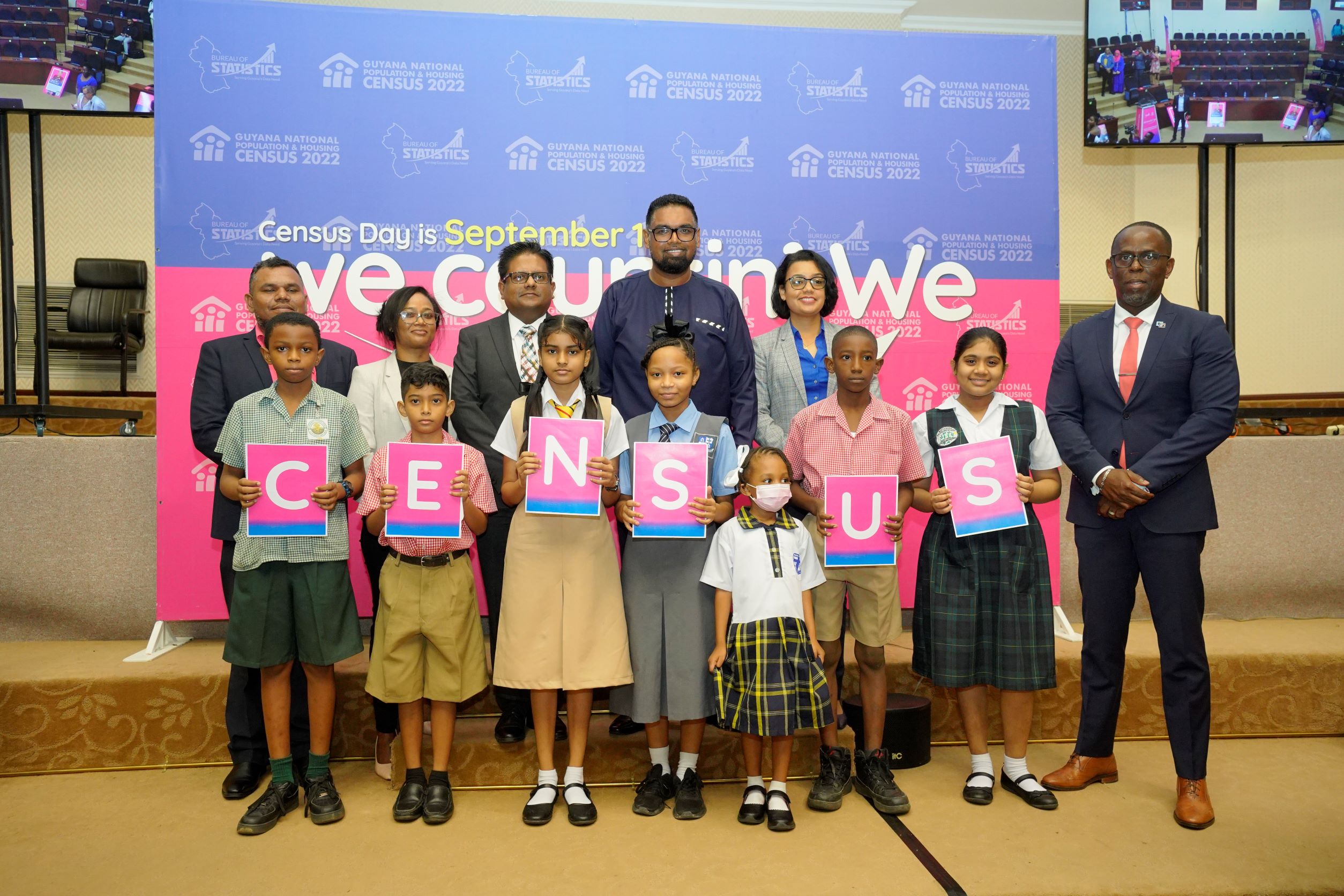 Georgetown, Guyana—(September 7, 2022) His Excellency Dr Irfaan Ali said that the Guyana National Population and Housing Census is critically linked to the development of Guyana and its people.

He said that the census will generate the quantitative platform through which the Government can advance developmental programmes and policies.

“Quantitative data is very important in making qualitative analysis. As a matter of fact, the qualitative is directly linked to the quantitative… the region as a whole is changing, and in that changing environment, the data set must also reflect the changes that we’re talking about.”

The Head of State, who delivered the feature address today at the launch of the event, also emphasised that the census is larger than just data collection and is an important tool for analytical work and policymaking.

In analysing the importance of the event, he said that censuses throughout the Caribbean Region, will help to gauge changes in movement that are sometimes brought about by climate change. This, he noted, is especially important due to the region’s drive to grow more and become food secure.

“Are we really making the best decisions on land use? And how do we gather the data that will give us the baseline data to make these decisions and decisions on climate vulnerability? What is the net effect of the natural disasters we have had across the region? What is the impact on population movements and shifts?”

President Ali emphasised the importance of data-driven processes. He also noted that the census, which was last held in 2012, would properly analyse the dynamic changes that have taken place in the country.

“Using census data, we can say, for example, without any fear of contradiction, that between 2002 and 2012, the following occurred: the housing stock increased by 31,813 units, which is a 17% increase in that decade—in that ten years. These new homes would have provided greater shelter and security for thousands of families. So immediately, you’re able to measure the impact of the housing programme on people. What did the housing programme achieve? How did it impact families and people? This also represents an increase in household wealth that can be leveraged to break the cycle of intergenerational poverty. Very important.”

As a result of that data, the President added, it is known that tens of thousands of families own their own homes, which allowed them to increase their net value, their net family value and their net individual value.

“So from that one data set, we can see that this one policy is changing the lives of people and contributing to breaking the problem of intergenerational poverty.”

Additionally, the President pointed to the importance of the census in measuring the outcome of the Government’s commitments, including the target of 50,000 house lots and the creation of thousands of jobs.

“So the census allows us to measure how well we’re doing against those public targets that we have set ourselves. But as Guyana develops, our labour force will be tremendously impacted. What will be impacted on our labour force is the changing economic landscape, the changing sectors, the priority that is given to technology-driven industries…”

The census, he added, will provide a gateway through which the Government can formulate that labour market’s information system to meet the country’s development priorities.

The data, President Ali continued, can also be used in other critical areas, including crafting an immigration policy, social sector planning, and family planning, as well as in identifying developmental gaps which exist across communities, within communities and across regions.

President Ali urged all Guyanese to participate in the census, which is set for September 15, 2022.

He also expressed the hope that at some point, data from the diaspora can be collected; this, he said, will allow for an analysis of the driving force for them returning in more rapid numbers and will also provide guidance on how the Government can create the necessary policies to facilitate the process.

The Population and Housing Census is a complete count of the population, to provide detailed data on population size, age, educational attainment, labour force, housing, and many other socio-economic characteristics.

Laluni would be transformed into a food production hub—President Ali