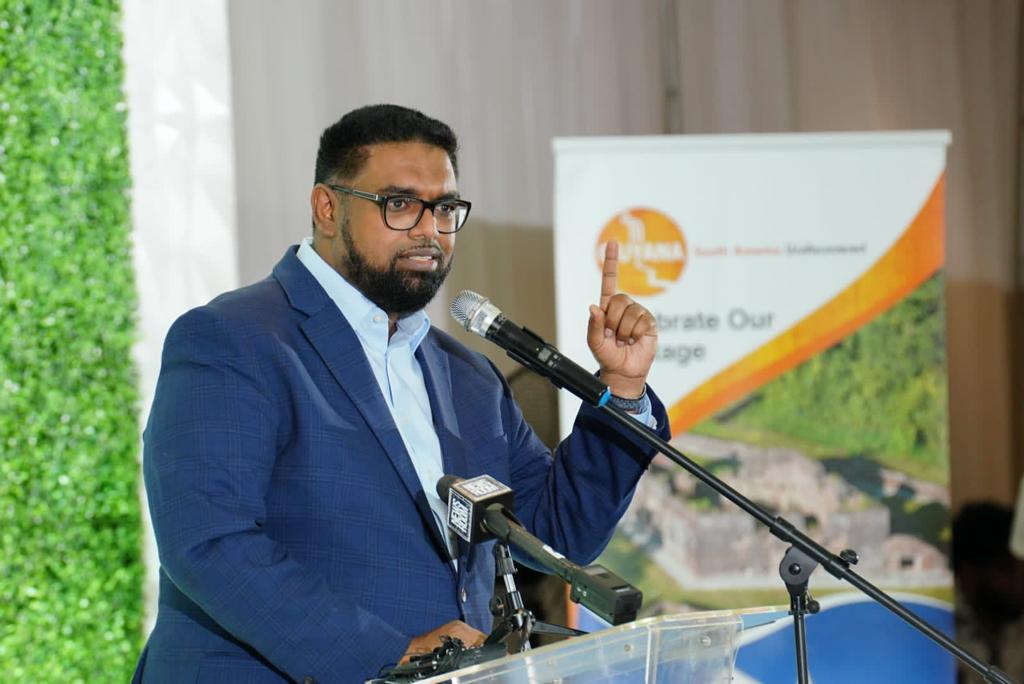 Georgetown, Guyana—(November 9, 2021) His Excellency Dr Irfaan Ali said that it is his Government’s vision to turn Guyana into “the number one eco-destination in this part of the region”.

To ensure that the country has a competitive edge, he said there will be massive development in the tourism sector in the near future.

“We are not going to play second to any.”

During his feature address at the Guyana Tourism Awards Gala at Parc Rayne-Rahaman’s Park in Houston on the East Bank of Demerara on Wednesday evening, the President said that this vision of Guyana is very clear to the Government and will be complemented by the level of visibility that the oil and gas sector has brought to the country.

“Oil and gas and the resources from oil and gas will be used to make every single sector competitive.”

The President said that Guyana has a quality tourism product, which is sustainable, long-lasting, and impactful on people and communities.

He underscored the strategies, the vision and the need to promote Guyana, not just as a place, but a total experience—to this end, he said that his Government would ensure that official Christmas gifts are locally produced.

“We want to prove to you that these products are worthy of the highest offices; gifts to diplomats and every other person who gets those gifts. So we have to lead by example.”

To augment the Government’s current plans and emphasise on local products and a broader destination, the Head of State announced that a “massive seawall re-development plan” will be launched early next year.   He said that this would be done by using best practices that are aimed at getting the greatest economic value out of the seawall for the sector.

Additionally, a number of other projects are planned for the city.

“We are going to rehabilitate the old train wagons and that entire old shed, an entire station, and we want to create, from Main Street to Vlissingen Road, a Guyana Walk.”

The President explained that the train station and the entire stretch of area will be converted into a local art gallery and feature areas for local craft and food courts for local restaurants.

“And then right through it will be paved, and you will have the pavement blocks. We will have trees planted. We will have sitting arrangements so that families can go there. And this will be done before the first half of next year, creating a new image.”

Marketing Guyana as a tourism destination, according to President Ali, is not just the responsibility of the Government but should unearth a sense of pride and patriotism from all Guyanese.

The President said that he is not asking persons to like the Government or any political parties, but to love their country and help promote and evolve its tourism sector.

He complimented the private sector for their efforts to decorate Main Street with Christmas lights and noted that the amount of marketing from persons posting photos of the lights on social media cannot be paid for.

Guyana’s tourism potential will also be on display next year when an oil and gas conference is hosted. Plans are also in place to host the FAO World Agriculture Conference within a few years.

“We are working on more international conferences to come our way because conferencing is an important part of the market here.”

The President also explained that his Government has started negotiations to have the Caribbean Premier League (CPL) T20 cricket final hosted in Guyana. He said that this will be complemented by the development of a two-week all-encompassing tourism product that features the rejuvenation of the Guyana Festival and a regional night that will feature a CARICOM food festival.

Additionally, the Head of State pointed out that there would also be a regional carnival that will feature the best bands from a number of Caribbean islands.

The President also noted that in next year’s budget, specific funds will be set aside for local artists, arts and crafts, and cultural events, etc.

President Ali also highlighted the need for increased product differentiation. He said that the Government will formulate ways to make Guyanese products more viable so they can become more competitive on the international market.

The grand event, which saw the distribution of a number of awards to outstanding local destinations and services, was organised by the Guyana Tourism Authority (GTA) and the Tourism and Hospitality Association of Guyana (THAG).