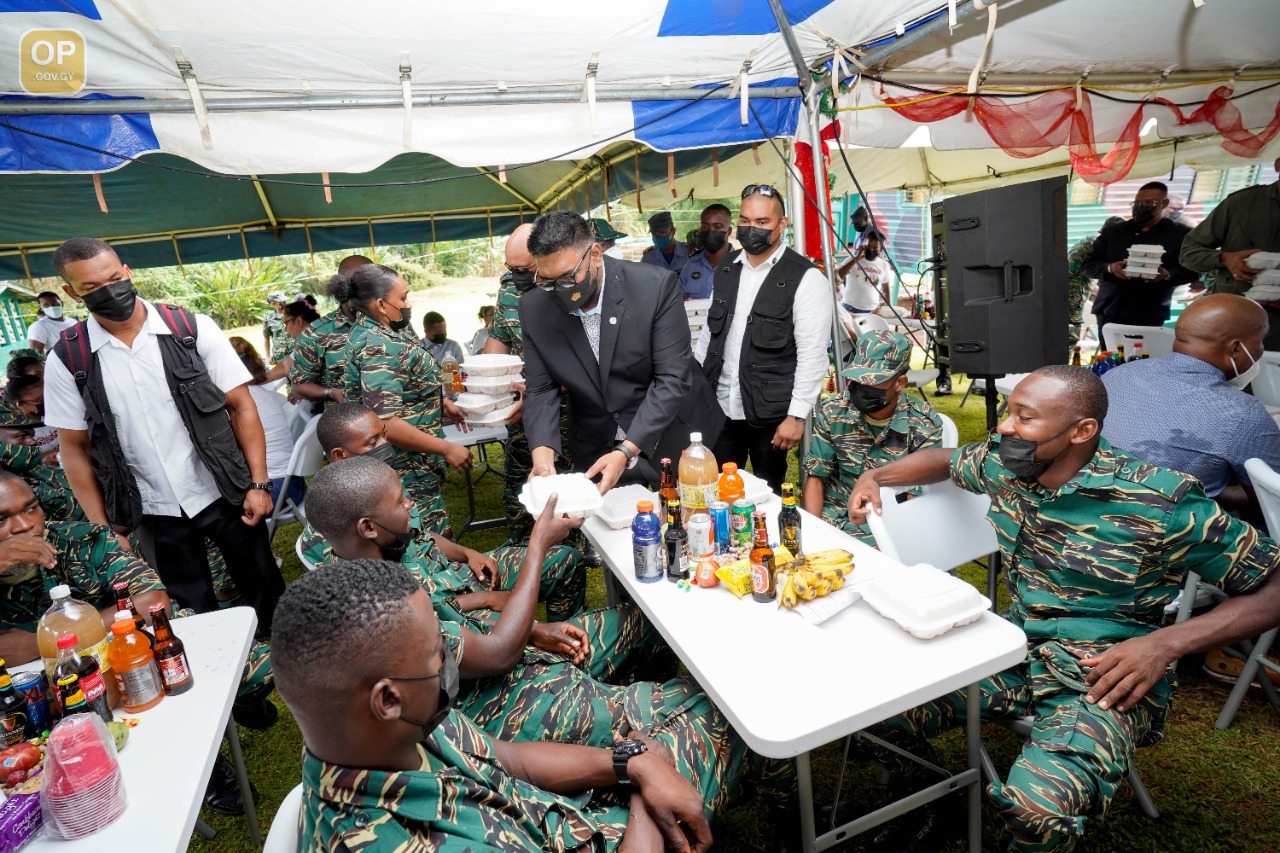 Mabaruma, Barima-Waini—(December 13, 2021) His Excellency Dr Irfaan Ali said that his Government will make the necessary investments in a number of army bases around the country to improve their technological capabilities, with the aim of advancing the educational development of the ranks.

The Commander-in-Chief of the Armed Forces made the pronouncement during his address to the Guyana Defence Force ranks at Camp Everard, in Mabaruma, earlier today at their annual Christmas Luncheon.

“Not because you are posted out here, you are divorced from the world of education. We are going to make the necessary investments in this base, and other bases that some people would say are way in the jungle. We are going to put the infrastructure in place to allow all of you to have a chance of improving your educational desires. And we want you to make use of it.”

Since becoming President last year, President Ali has been pushing tertiary-level educational development among the ranks.

In keeping with a tradition that he started in 2020, the President also requested that the ranks nominate a male and female among themselves who they think are deserving of scholarships.

The ranks nominated Sergeant Netisha DeSantos and Corporal Ryan David, who were, on the spot, awarded scholarships to further their studies.

The Head of State also complimented the ranks for the role that they play in safeguarding Guyana’s borders.  He reminded them that being posted at important bases such as Camp Everard carries additional responsibilities such as respecting the culture of the communities and being respectful to their residents.

“We must not allow the uniform we wear to ever be tarnished.”

The GDF was also praised for the meaningful part that they are playing in the development of the country.

“Today, we have reengineered the engineering corps and they are doing infrastructure works all across the country.”

The President said that it is his aim to involve the ranks in more infrastructural development projects in locations in which they serve.

The government’s priorities, according to the President are geared towards improving the lives of every single Guyanese.  He said while improving salaries and conditions of work will be done, the Government’s priorities are also about giving the ranks the opportunities to enhance their lives and develop themselves.

He also noted that as the country grows and expands and new areas of opportunities are opened, the defence strategy must also grow and expand.

“All of you will see fundamental changes in your mode of operation—the use of technology, the improvement of strategies, the redevelopment of infrastructure, the improvement of your working condition, the deploying of assets, and adding assets to make your work more efficient and easier.”