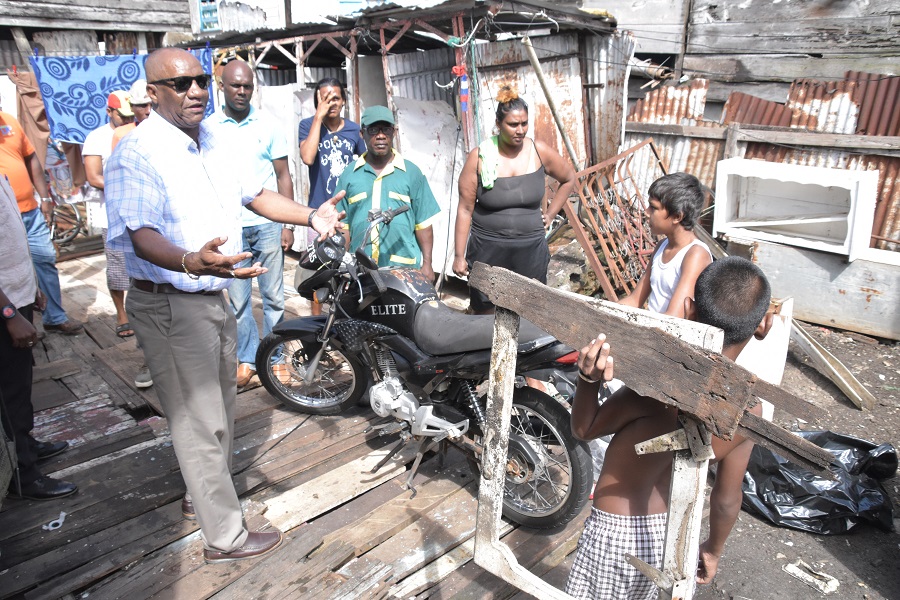 Georgetown, Guyana – (January 6, 2017) Minister of State, Mr. Joseph Harmon and a team of representatives from the Civil Defence Commission (CDC) and the Mayor and City Council (MCC), today, paid a follow-up visit to Albouystown, South Georgetown to commence sanitation works aimed at enhancing residents’ quality of life and reducing the risk of flooding. The clean-up exercise is being spearheaded by the CDC, which falls within the Minister’s purview, in collaboration with the Guyana Defence Force (GDF), the Guyana Police Force (GPF), the private sector and residents. Minister Harmon applauded the residents for their cooperation, noting that they have made significant progress since the exercise started early this morning.

In his charge to residents assembled at the junction of Hill and James Streets, Minister Harmon encouraged them to continue to support the exercise, even as he reminded them that it is every individual’s responsibility to keep their surroundings clean. “We want to encourage all communities to come together and clean up their environment, ultimately it is you in the community that will be affected when it is not clean” he said.

Minister of State, Mr. Joseph Harmon gestures as he implores residents of Hill Street, Albouystown to desist from allowing young children to participate in the clean-up exercise.

The Minister also said that the CDC will be donating some equipment to the community so that cleaning exercises can be conducted regularly to maintain a clean and healthy environment. “The Civil Defence Commission will be leaving some equipment here in the community so that you can also continue to do this. It is not just a one-off exercise, and you have to keep doing that all the time,” he said.

Meanwhile, Director General (Ag) of the CDC, Lieutenant Colonel Kester Craig said that while the Minister and the team were distributing cleaning hampers to flood-affected residents in the community last week, they soon realised that there was an emerging garbage crisis and quickly mobilised efforts to enhance general sanitation there. He said that in addition to the GDF and the GPF, GAICO Construction and General Services Incorporated, which is one of the stakeholders in the Civil Defence Network, has also thrown its support behind the efforts. The CDC also collaborated with the MCC Constituency 10 Councillors to galvanise residents into action.

“The Minister of State, who has responsibility for disaster risk management in Guyana, mandated that [the] Civil Defence Commission coordinate with the Mayor and City Council and the councillors of Albouystown and return today to conduct a clean-up exercise,” he said.

Lieutenant Colonel Craig said that the CDC has provided trucks to transport all the garbage to the dumpsite as well as a range of necessary equipment, including shovels and spades, to assist in executing the works. “This is a community-based initiative and we want to ensure that this doesn’t happen only in Albouystown, but other communities would come on board and help clean up their environment. The approach is more in keeping with the Civil Defence Disaster Risk Reduction Strategy and what we’re doing here is reducing the risk with the work being done,” he said.

A total of six blocks, thirteen canals and alleyways are scheduled to be cleaned today. Three blocks have already been cleared and the other nine blocks will be completed during the course of the month.