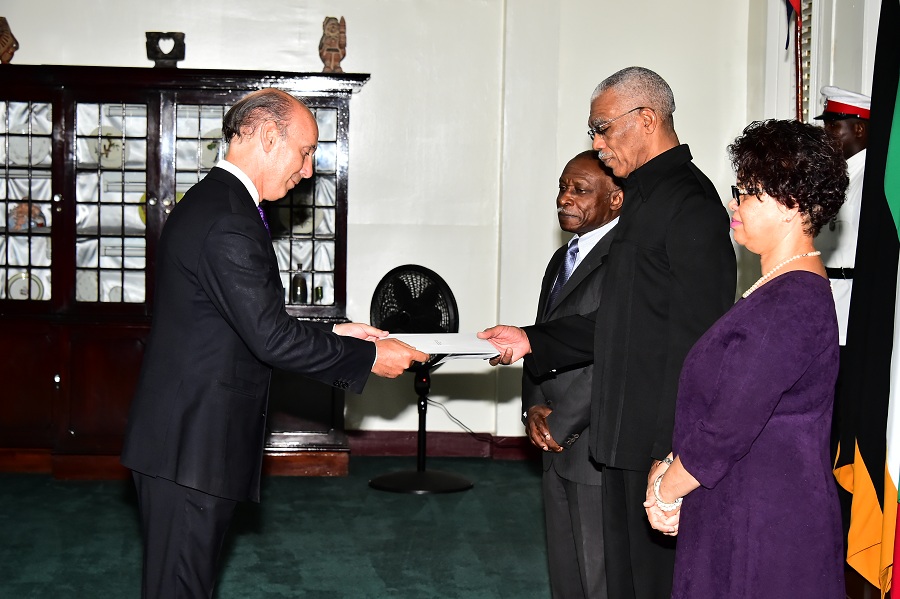 Georgetown, Guyana – (September 13, 2017) President David Granger said that Guyana looks forward to deepening its relations with the Kingdom of Spain in the areas of investment, trade and tourism. He noted too, that the recent conclusion of the Agreement for the Reciprocal Elimination of Visas for Holders of Diplomatic Passports between the two countries is a demonstration of a strong commitment to improving bilateral relations. The President made these remarks, today, when he received the Letters of Credence from His Excellency Javier Maria Carbajosa Sanchez; accrediting him the new non-resident Ambassador of Spain to Guyana.

Speaking of bilateral cooperation, the Head of State pointed out that “Guyana’s petroleum industry has already attracted Spain’s investment. We anticipate increased involvement of Spanish companies in the oil and gas sector of our economy.”

In terms of environmental protection, the President informed the Ambassador that Guyana is moving towards establishing a ‘green state’ in which more focus will be placed on the biodiversity preservation, the provision of eco-tourism and eco-educational services, the promotion of renewable energy generation and the adoption of practical measures to ensure climate adaptation. In this regard he noted that, “Guyana is deeply impressed and is intensely interested in Spain’s success at increasing energy generation from sustainable sources and looks forward to enhanced country-to-country cooperation in this area.”

Meanwhile, similar sentiments were expressed by Ambassador Sanchez, who said that his accreditation is not merely a formality that is dictated by tradition but rather, a renewal of the will and determination of the two countries to the strengthening of friendship and cooperation.

“Cooperation between our two countries can help forge global solutions to global challenges…Spain has been focused traditionally, on the Spanish-speaking Caribbean; however, we have come to realise that there is much that Spain and Guyana can do together. Not only is Guyana a promising country for trade and investment opportunities, it also possesses a strong entrepreneurial spirit and is also very active in the context of CARICOM,” he said.

Guyana and Spain established diplomatic relations on October 12, 1979. Its relationship is founded on mutual respect for each other’s territorial integrity and sovereignty, mutual non-interference in each other’s internal affairs, cooperation for mutual benefit, respect for treaties and international law and the maintenance of international peace and security.