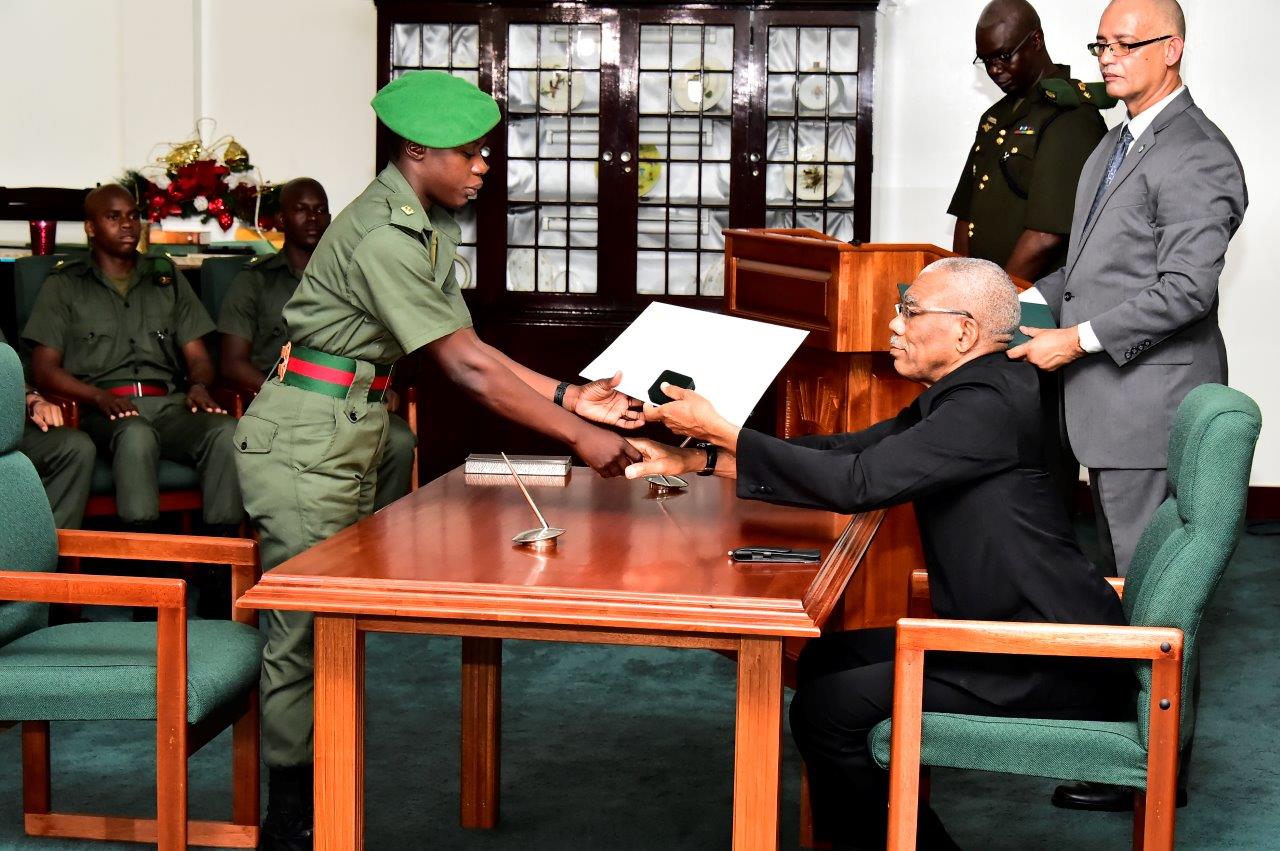 Georgetown, Guyana – (March 22, 2017) President David Granger, today, urged 11 newly commissioned Guyana Defence Force (GDF) Officers, to honour the laws of Guyana as well as their responsibility to Guyanese and the nation’s natural patrimony. The President made these remarks at the State House, during the Commissioning Ceremony, where he presented the Officers with their Instruments of Commission following their recitation of the Oath of Allegiance.

The Officers are among 14, who successfully completed the Standard Officers Course (SOC) No. 49 out of a total of 36, who had initially joined the course. Also included in this batch were two officers from Belize and one from Antigua and Barbuda.

The President reminded the Officers of their obligation to observe the GDF’s five core values; Duty, Discipline, Identity, Integrity and Loyalty, as well as their responsibility to obey the laws of Guyana. The officers were also presented with a commemorative ‘green’ Guyana coin. “That coin, which you have in your possession… signifies that Guyana is a ‘Green’ State and should remind you as you move around this country of your responsibility not only to the state but also to the people and the environment,” the President said.

Second Lieutenant Brandi Johnson, the only female to be Commissioned today, receives her Instrument of Commission from President David Granger

The Commander in Chief referred to the ceremony as one of the most sacred ceremonies that the officers will ever attend in their military careers, and that it would be one that they remember for the rest of their lives. “It is a very touching moment for all of us… This course is an important rite of passage. It is an ancient ritual and in armies all over the world, officers are commissioned and this commission distinguishes them from other ranks… The Instrument of Commission signifies that the officer is not just a commissioned officer but he has special responsibilities to perform,” he said.

The President highlighted the words inscribed on the Instrument, which reads ‘special trust in your loyalty, courage and good conduct’. The President said that these words serve as testimony to the relationship between Commander in Chief and Officers. He noted, however, that being granted their ‘State Commission’ by the Head of State, a right that is conferred on him as President and which is outlined in the Defence Act, is not a graduation certificate, nor does it signify their successful completion of a training course. “It is the lawful license, which enables you to perform your function. It reposes in you the trust to exercise authority over your subordinates. It enables you not only to demand obedience of your subordinates but also to obey your superiors,” he said.

Following the Ceremony, the officers were treated to lunch with the President in the Baridi Benab at State House . Also present at the event were Acting Prime Minister Khemraj Ramjattan, Attorney General and Minister of Legal Affairs, Mr. Basil Williams S.C., Minister of State, Mr. Joseph Harmon, Chief of Staff of the GDF, Brigadier Patrick West as well as other senior GDF officers.

Remarks by His Excellency Brigadier David Granger at his induction into the Rose Hall Town Youth and Sports Club held at the Ministry of the Presidency 3rd February, 2016