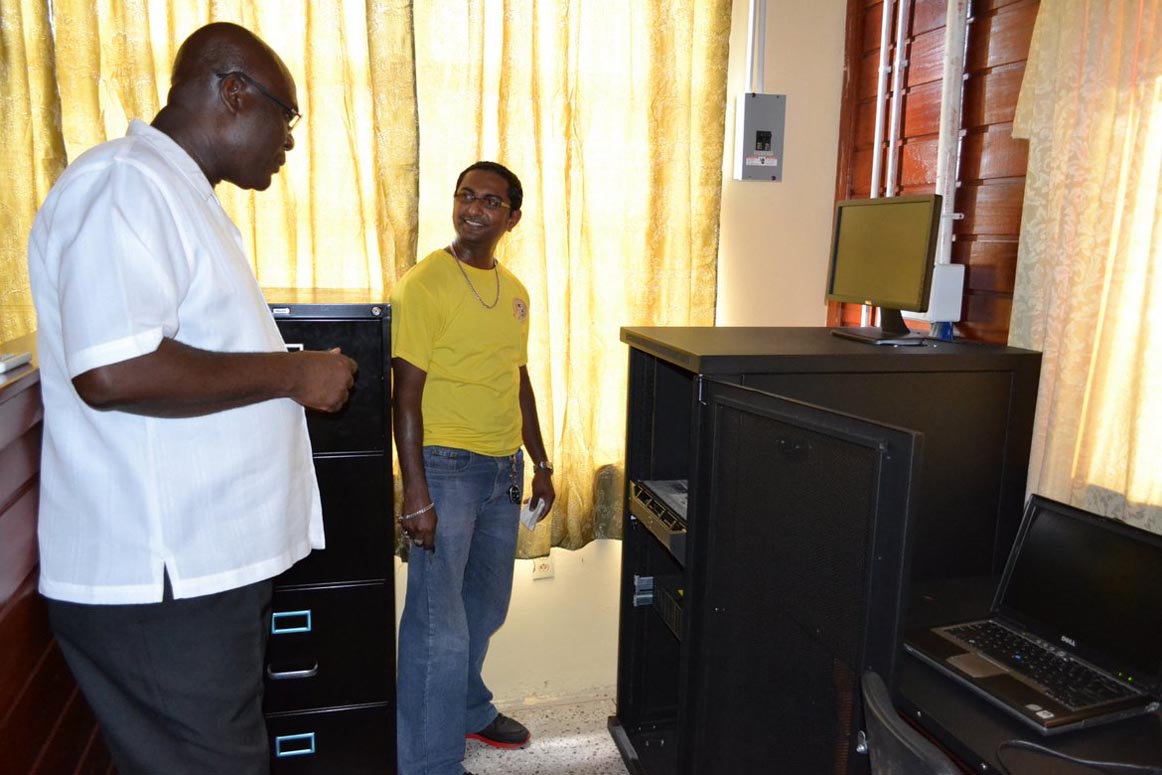 The national connectivity programme has its genesis in President David Granger’s pledge to ensure internet access to citizens across Guyana, free of cost. This phase of the project caters for 94 secondary schools in both rural and urban areas and aims to create Information and Communication Technology (ICT) hubs in poor, remote communities to provide designated areas for public access. It is being rolled out by a team, which includes Mr. Phillip Walcott, Director of Project Management and Community Development, Mr. Marlon Pearson, Community Analyst, Mr. Alec Persaud, Senior ICT Engineer, Mr. Sachin Ramsuran, Assistant ICT Engineer and Mr. Clint Jones, Rigger/Technician.

Mr. Roopesh Persaud, of the Upper Corentyne Industrial Training Centre, gives Presidential Advisor on eGovernment and Chief Executive Officer of the eGovernment Agency, Mr. Floyd Levi a closer look at the server that facilitates connectivity at the centre.

“We started at the eastern most high school and we’re working our way to Georgetown. What this internet connection will do is to allow all students, particularly those who are CSEC [Caribbean Secondary Education Certificate] students to have access to the internet for research,” Mr. Levi said, during a site visit at Skeldon Line Path Secondary School, Upper Corentyne. He pointed out that connectivity is, in today’s world, a critical resource to ensure that CSEC students successfully research and complete School Based Assessments.  Further with online submission now a new requirement of the Caribbean Examinations Council (CXC) from 2017, the programme is being implemented at an opportune time.

Connectivity will also facilitate the delivery of the National Centre for Education Research and Development’s (NCERD) new Science, Technology, Engineering and Mathematics (STEM) curriculum, he added. The schools, ICT hubs and learning institutions are all being served by 54 towers that have been erected along the Coast and connected to the eGovernment Agency’s 11 LTE sites; a 4G mobile communications standard that provides data speeds that are as much as 10 times faster than 3G standard.

“School is opening on [September] fifth and we certainly want to have all the schools that we’re working with… a functioning IT lab that has high speed internet connection and that is connected to the Ministry of Education’s network,” Mr. Levi said. Eight network sites run from Skeldon to New Amsterdam and three from Rosignol to Mahaicony, Mahaica-Berbice Region. The last tower was erected in the compound of the Whim Police Station, Corentyne and the Agency is exploring the possibilities of erecting another tower in the backyard of the Guyana Post Office Corporation (GPOC) at Kiltearn to further augment this service. 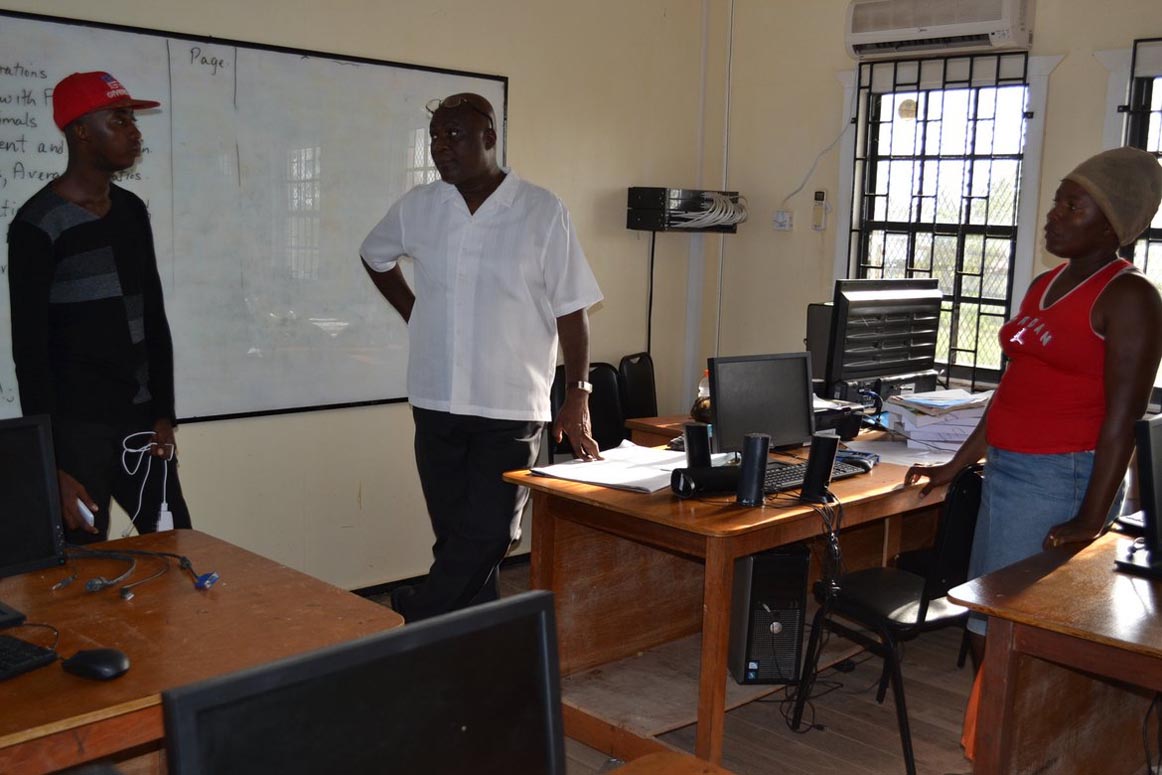 Presidential Advisor on eGovernment and Chief Executive Officer of the eGovernment Agency, Mr. Floyd Levi (centre) pays keen attention to IT Teacher at Manchester Secondary School, Mr. Winston Profitt (first left) as he talks about some of the issues challenging the department. Sweeper/Cleaner at the school, Ms. Shaundacie Deane (first, right) was happy that the school will now benefit from internet access.

The connectivity programme is expected to benefit 8,219 students enrolled in grades 7 – 11 in 17 schools in East Berbice-Corentyne (Region Six), 3,000 students in 11 schools in West Demerara, 15, 854 students in 20 schools in Georgetown and 4,243 students in 7 schools along the Essequibo Coast. Teachers at Skeldon Line Path, Tagore Memorial Secondary and at Manchester Secondary all praised the initiative and were optimistic about the benefits that would accrue to their students. Each of these schools are equipped with air conditioned Information Technology (IT) Laboratories has 14, 30 and 24 computers respectively. An area that will need to be addressed, though, is the frequent and prolonged power outages that often plague these areas.

Mr. Levi also informed the teachers that plans are in train to provide laptops to all the teachers, who had not benefited during the distributions made under the One Laptop Per Family platform operated by the previous administration. He also advised them to ensure that all students have access to the internet to do research and not just those, who are studying IT and Electronic Document Preparation and Management. All the teachers asked for consideration to be given to providing internet access in their staff rooms. 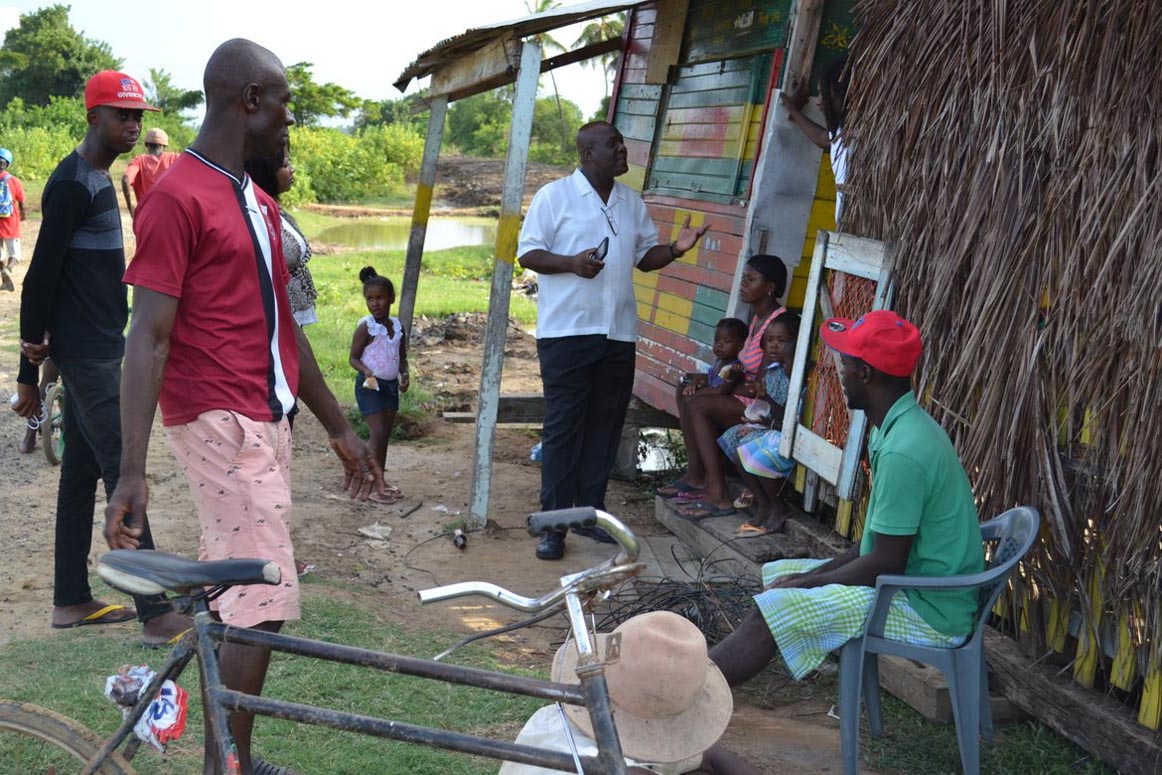 Presidential Advisor on eGovernment and Chief Executive Officer of the eGovernment Agency, Mr. Floyd Levi (centre) gestures while making a point to Manchester residents about the possibilities of establishing an ICT hub in the Lan-Liv-Man Community Centre.

The team also conducted a fact-finding mission in the remote Barakara and Ekururu, Canje Creek communities with a view to creating ICT hubs there. Mr. Roopesh Persaud, Workshop Assistant and Information Technology Technician of the UCITC, said that he is confident the centre’s managers would be pleased to transform it into an ICT hub for the community.

“We are in the process [of] creating a learning resource centre with TVET [the Technical, Vocational Education and Training unit of the Education Ministry]… we’re trying to convert our library,” he said. Mr. Persaud also noted that the centre previously had an open Wi-Fi internet connection, which it allowed its immediate neighbours to use freely.

On learning about the wider focus of the connectivity programme, IT Teacher at Manchester Secondary, Mr. Winston Profitt, who is also the Chairman of the Lan-Liv-Man Community Centre, asked for assistance to revitalise the centre. During a site visit, Mr. Levi discussed the possibilities of locating an ICT hub at the centre with a small group of residents assembled there. He also suggested several other ideas about activities that can be held there to foster cohesion and a sense of ownership of the centre, which was built to benefit the Lancaster, Liverpool and Manchester communities.

Connectivity within police ‘B’ Division

The eGovernment Agency will also connect the Guyana Police Force Police ‘B’ Division headquarters in New Amsterdam, the Felix Austin Police College in Adventure, Corentyne and the Moleson Creek Police Outpost to its network, to facilitate internet access at these locations. Commander ‘B’ Division, Mr. Ian Amsterdam welcomed the initiative, saying that internet connectivity will be a boon to several social programmes being conducted in his area. Meanwhile, Corporal Nykofi Austin, who is stationed at the police college, said the programme will augment the current internet service provided at the college and facilitate wireless connection to the internet for the entire compound, which houses two dormitories that accommodates 60 recruits, staff quarters and the Zara Computer Centre.

The Zara Computer Centre, which provides free ICT classes to the entire neighbourhood, may eventually be transformed into an ICT hub for the community.

As part of the Public Internet Access Programme, the eGovernment Agency will also provide free internet access to persons visiting government agencies and public institutions, via connections at the Mayor and City Council offices in all municipalities, starting with New Amsterdam.

In addition, all eGovernment Agency vehicles are equipped with the capability to provide free internet access to persons in their immediate environs. This week, the mobile unit will be in Sandvoort, Port Mourant and Trafalgar, West Berbice where the Agency’s Programme Management and Community Development Department will be conducting training for selected members of the management and monitoring committees of the Community ICT hubs.