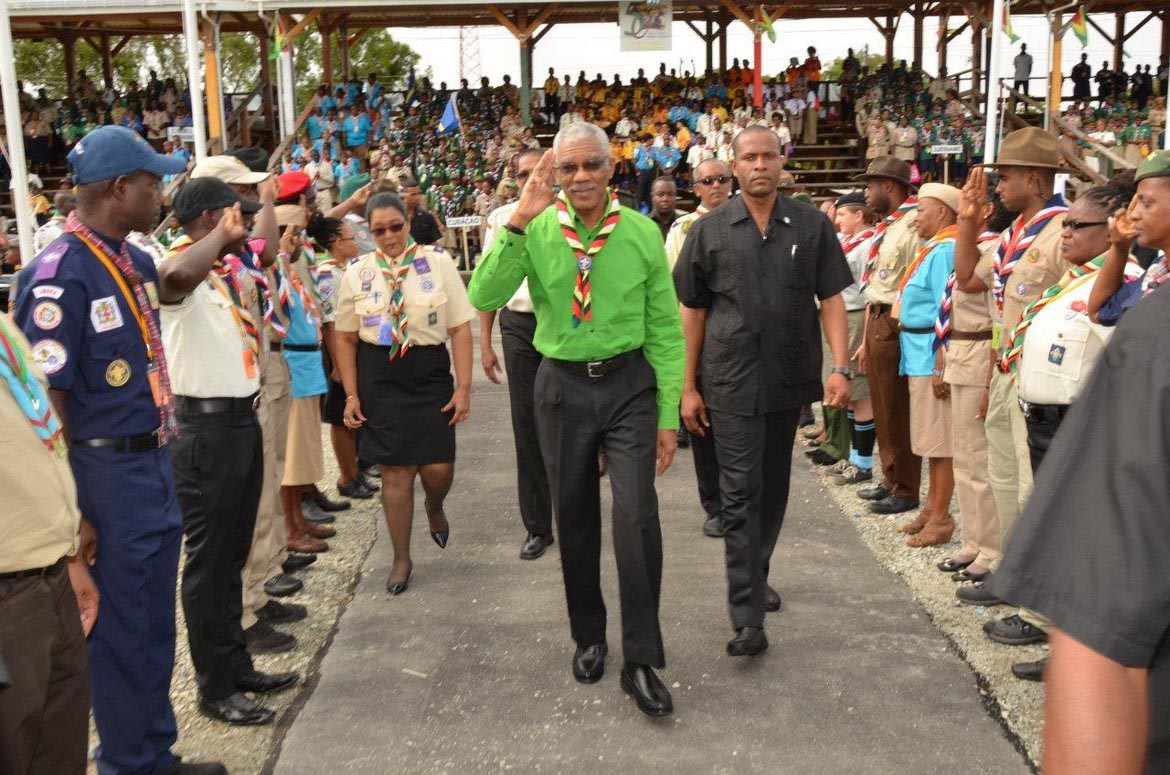 Georgetown, Guyana – (July 25, 2016) President David Granger,yesterday, declared opened the 14th Caribbean Cuboree in Guyana at the D’urban Park, noting that the Scout movement has been able to build linkages between the school, places of worship and home, thereby contributing to the development of the character of the young people involved, so that they become responsible citizens within their communities.

The Cuboree is an event held every two years for young Scouts, particularly between the ages of eight to 11 for six days and five nights during, the break from school between July and August. The President, who addressed over 700 children participating in the event from across 14 countries in the region, said that the country was happy to welcome the various delegations, especially in the year of the Golden Jubilee.

“You have congregated here from the corners of the Caribbean. We are happy to have so many of you here on the continent of South America. We look forward to your having an enjoyable experience and memorable meetings with fellow Cub Scouts. Guyana celebrates its fiftieth anniversary of its Independence this year and is honoured to host this 14th Caribbean Cuboree. It is a special year for us and your presence here graces our Golden Jubilee year. Guyana was the first country in the Caribbean and the second on the continent of South America to introduce scouting.

President Granger acknowledges the salute by the Scouts of the 14 participating countries, as they welcome him to the opening ceremony of the 14th Caribbean Cuboree, which is being held in Guyana.

President Granger smiles and waves to the participants as he takes the podium to deliver the feature address and to declare open, the 14th Caribbean Cuboree in Guyana.

Delving deeper into the history of scouting President Granger said that the model of scouting that was transferred to this region was based primarily on character building among boys. However, while girls now make of the ranks of the institution, the sacred values of respect, reverence and discipline have remained constant.

“The Scout movement is no longer segregated. Boys and girls grow up in the same organisation learning to recognise and respect each other. The focus, however, never was confined to academic education or religious instruction. Scouting involved outdoor activities and the development of life skills, which appealed to young people. Caribbean societies, such as ours, are built on the sure foundations family life, religious worship, education, responsible citizenship and loyalty to your countries. These values demand self-respect, respect for God, respect for your countries, respect for the laws of the land, respect for other citizens, respect for property and respect for the environment, which sustains life,” President Granger told the participants.

He noted that the Scout movement in the Caribbean has been inculcating these values in the young for more than a century and onus was now on this generation of Cub Scouts, to continue that ‘virtuous tradition’. 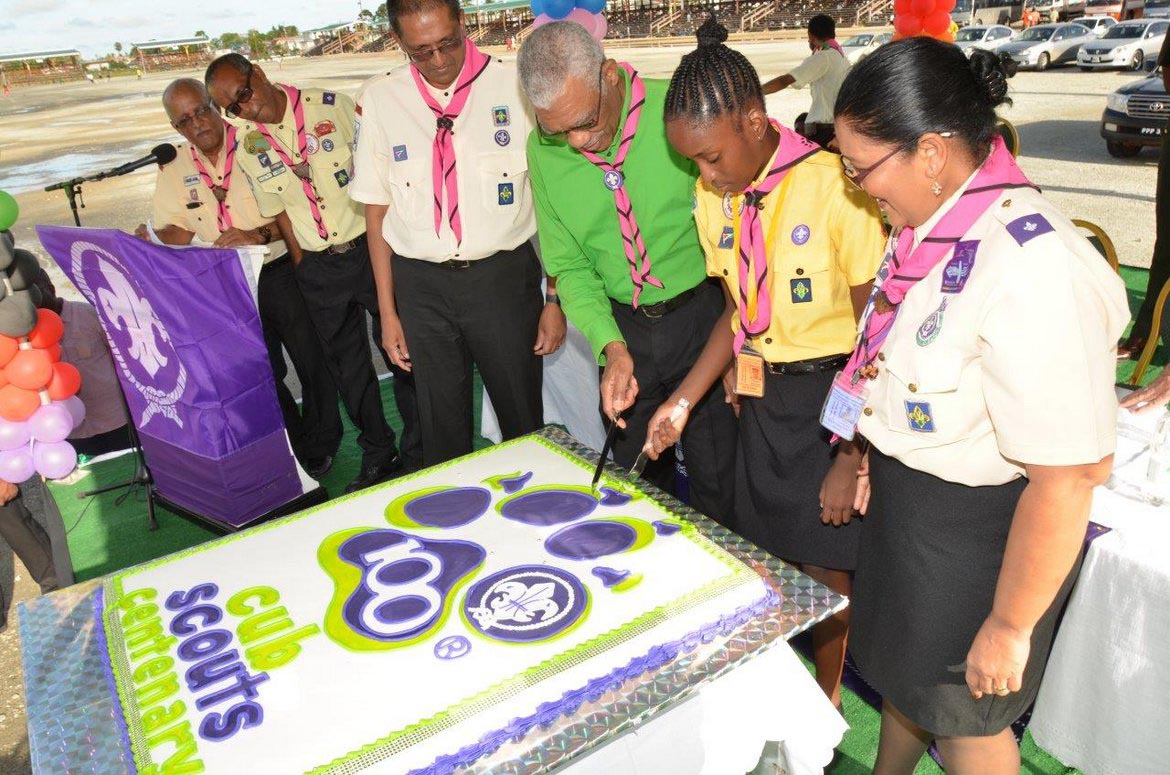 Mr. Ramsey Ali, Ms. Joaquin and other Scouts watch on as President Granger cuts the cake to celebrate the centennial anniversary of Scouting.

President David Granger and First Lady, Mrs. Sandra Granger, last evening, hosted a reception on the lawns of State House for the visiting Scout Leaders, who are in Guyana for the 14th Caribbean Cuboree. Pictured here are President Granger and Mrs. Granger with the President of the Scouts Association of Guyana, Mr. Ramsey Ali and Camp Chief, Ms. Zaida Joaquin at the reception.

“I encourage you to enjoy yourselves; to educate yourselves about different countries and cultures and to encounter fellow Cubs from the Caribbean. Your visit to Guyana will expose you to experiences that will deepen your commitment to your own countries and that will strengthen your character as citizens of the future,” he urged.

Meanwhile, Camp Chief, Ms. Zaida Joaquin in her brief remarks, said that the presence of such a large number of Scouts in Guyana for the Cuboree was demonstrative of the commitment the young leaders had for the promotion of a better world. 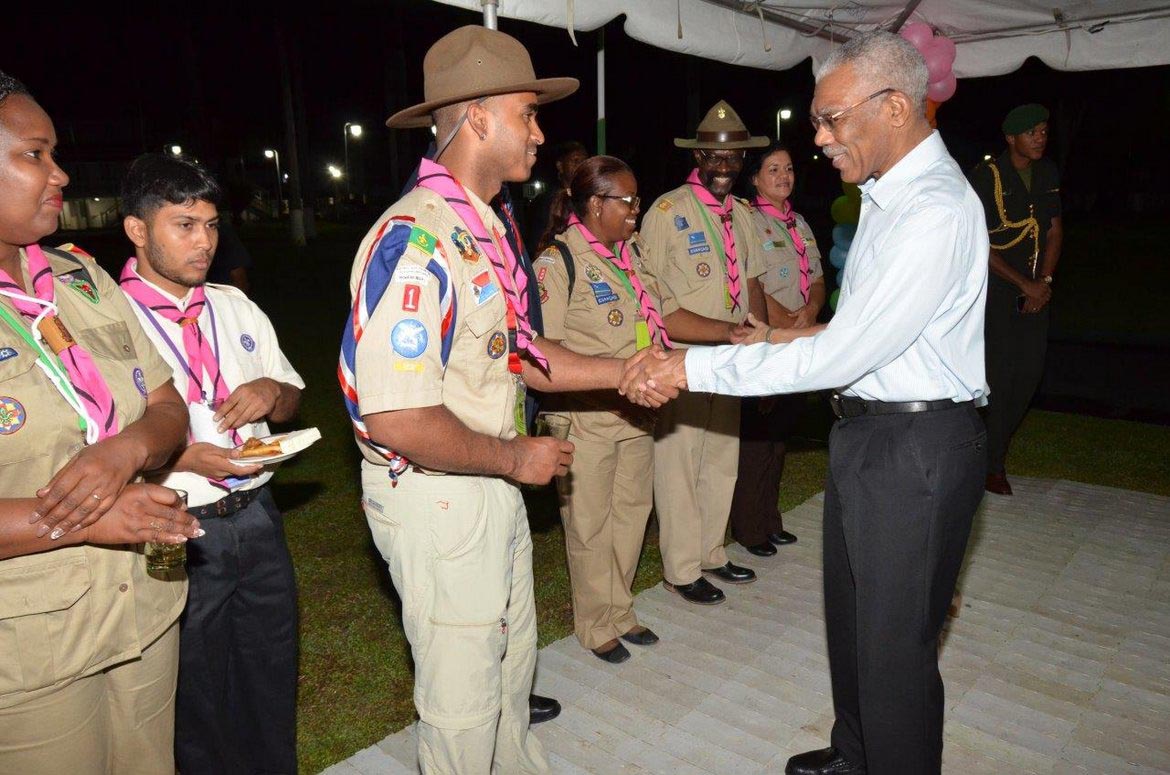 President David Granger shares a light moment with this team leader from Aruba at the reception, which was hosted on the lawns of State House, last evening

“We consider it a rare and distinct honour to host these young leaders, who will someday shape the course of world affairs. Your presence here is evidence that people everywhere are doing their utmost to preserve peace and save humanity through the use of love and understanding. 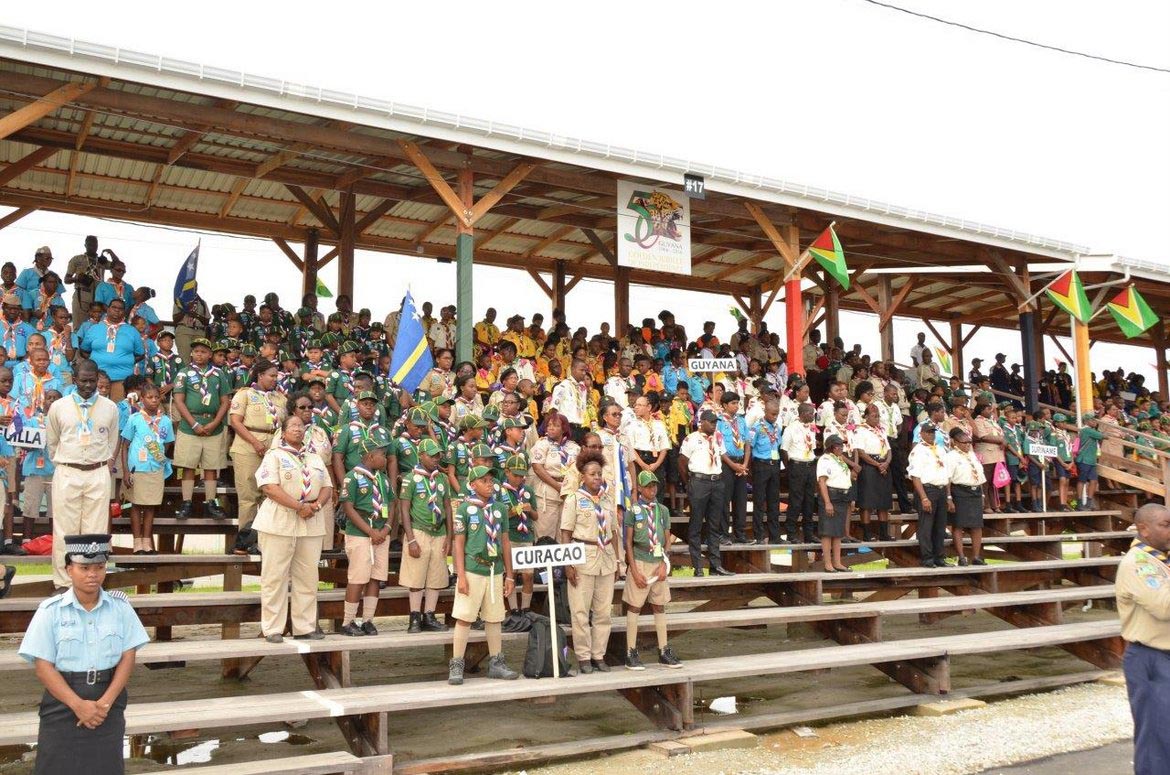 A section of the participants of the 14th Caribbean Cuboree

This occasion is a demonstration that young people like you want to preserve this world and to assert your right to live in a world of peace, trust and decency,” she said.
President of the Scouts Association of Guyana, Mr. Ramsay Ali, in his remarks, noted that the planning of the event began since last year. He noted that the support of President Granger, who is patron of the organisation, has played a significant role in the event becoming a reality.
Liam Carter, a Cub no more than eight years old from Barbados, in an invited comment, excitedly remarked that it was his first time in Guyana. He said he is excited for the week of activities planned for the Cuboree.

The President and First Lady, Mrs. Sandra Granger, later in the evening, hosted a welcome reception for the team leaders on the lawns of State House. There, the leaders were given the opportunity to interact not only with their counterparts, but also photo opportunities with the President and Mrs. Granger. 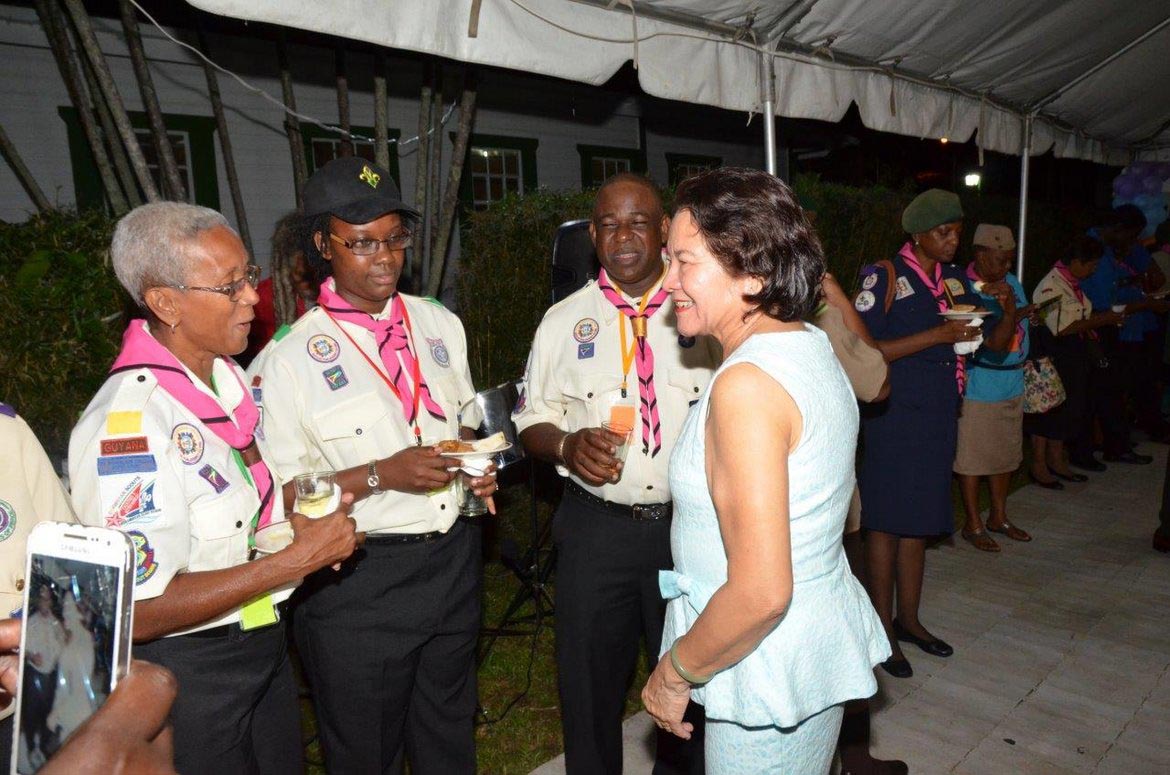 First Lady, Mrs. Sandra Granger, seems to have captured the attention and admiration of this group of Scouts at the reception held in their honour at the President’s residence.

Message of solidarity from the Government and the people of the Cooperative Republic of Guyana with Germany on the recent attack in Munich, Germany.

President Granger calls on City Hall to consult, not dictate