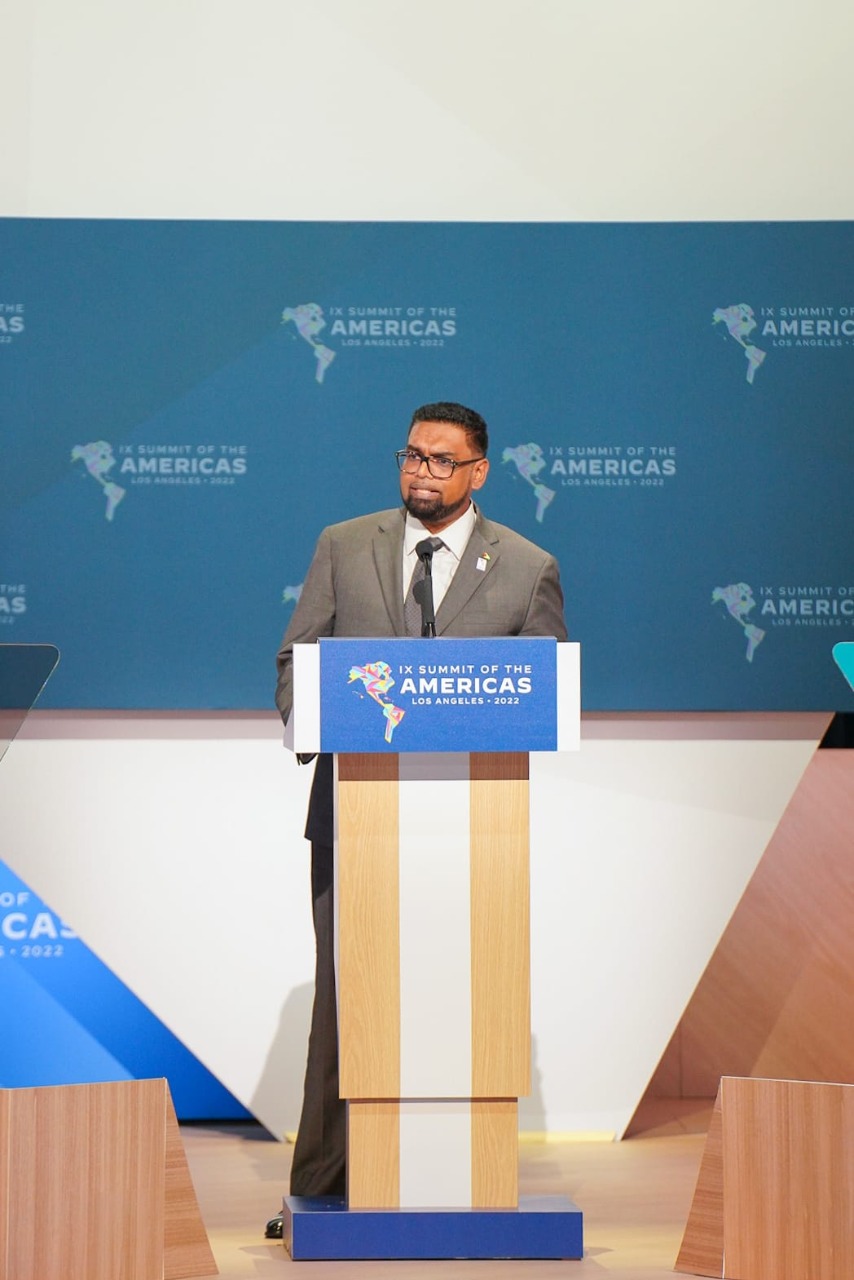 Los Angeles, California—(June 10, 2022) His Excellency Dr Irfaan Ali said that in order to fix the systemic issues of North, South, Central America, and the Caribbean, there must be “frank and fact-based” conversations among member states.

To engender this, the President explained that this week’s IX OAS Summit must define a pathway for integration of member countries’ infrastructure, people and economies—which is time-bound and collectively progressive.

The Head of State made the assertions during the Second Plenary of the Summit earlier today. The Summit is being held under the theme, “Building a Sustainable, Resilient, and Equitable Future”.

He said that in addressing the theme of the conference, member states of the organisation must examine important pillars such as democracy, equity, good governance, fairness, justice, race relations, security and partnership, among others, to have a realistic understanding of the state of affairs of the Americas.

The President listed statistics highlighting inequality and hindrances to multilateral growth, which, he explained, has stagnated overall development. He said that while member states are living among various challenges to the aforementioned pillars, collectively, they have the potential to bring prosperity to every home.

President Ali listed the potential of energy security—using abundant natural resources, land and access to water to ensure there is food security while noting that there is enough rainforest cover and technology to decelerate the impact of climate change.

Additionally, he asserted that having enough access to finances will bridge inequality and support sustainable development for all citizens of the Americas.

“The question is, why have we not achieved this? It points to systemic issues—and we must be able to have a frank conversation on resolving these systemic problems, not a political and ideological conversation, but a fact-based conversation aimed at uplifting the people of this region to a position of prosperity.”

The President was adamant that necessary adjustments would catapult overall development and growth.

“We have the potential and we must use every available tool, all the assets that are available to us to reach that potential, and we can do it if we commit ourselves.”

The Head of State also noted that after a meeting with US President, Joseph Biden and Vice President, Kamala Harris, he is convinced that the leadership is ready for this “frank, fact-based” conversation and was encouraged by the immediate action to set up joint committees to address important issues such as food security, climate change, energy security and financing.

“This should be expanded to the Americas in finding solutions based on a time frame. Let us say to the people of this region that as political leaders, we are ready to tie ourselves to time-bound initiatives in delivering to them the prosperity we all speak of. We need, as a region, to have these tough conversations that are necessary to make the best possible decisions for the people of this region.”

President Ali noted that although Guyana’s economy is projected to double in two years and the country is expected to become one of the fastest-growing economies, it understands the need for regional and global collaborations.

“We understand that we are not alone in this world and this region, and the prosperity that we seek to achieve cannot be done alone. We belong to the family of humanity and we are ready to make our contribution to that family of humanity.”

The President highlighted Guyana’s bountiful forest, which stores 19.5 gigatons of carbon and noted that the country would not be reckless and irresponsible in managing these resources in the interest of the region and the world.

He also spoke about the potential of several CARICOM member states and listed its collective drive and capability in energy and food security.

“Let us forge ahead to unite the Americas, strengthen our relationship forged in respect and good governance so that when we reach again, we do so as a singular whole and create a winning formula and culture for all.”

Cash grant of $100,000 for each child with a disability—President Ali