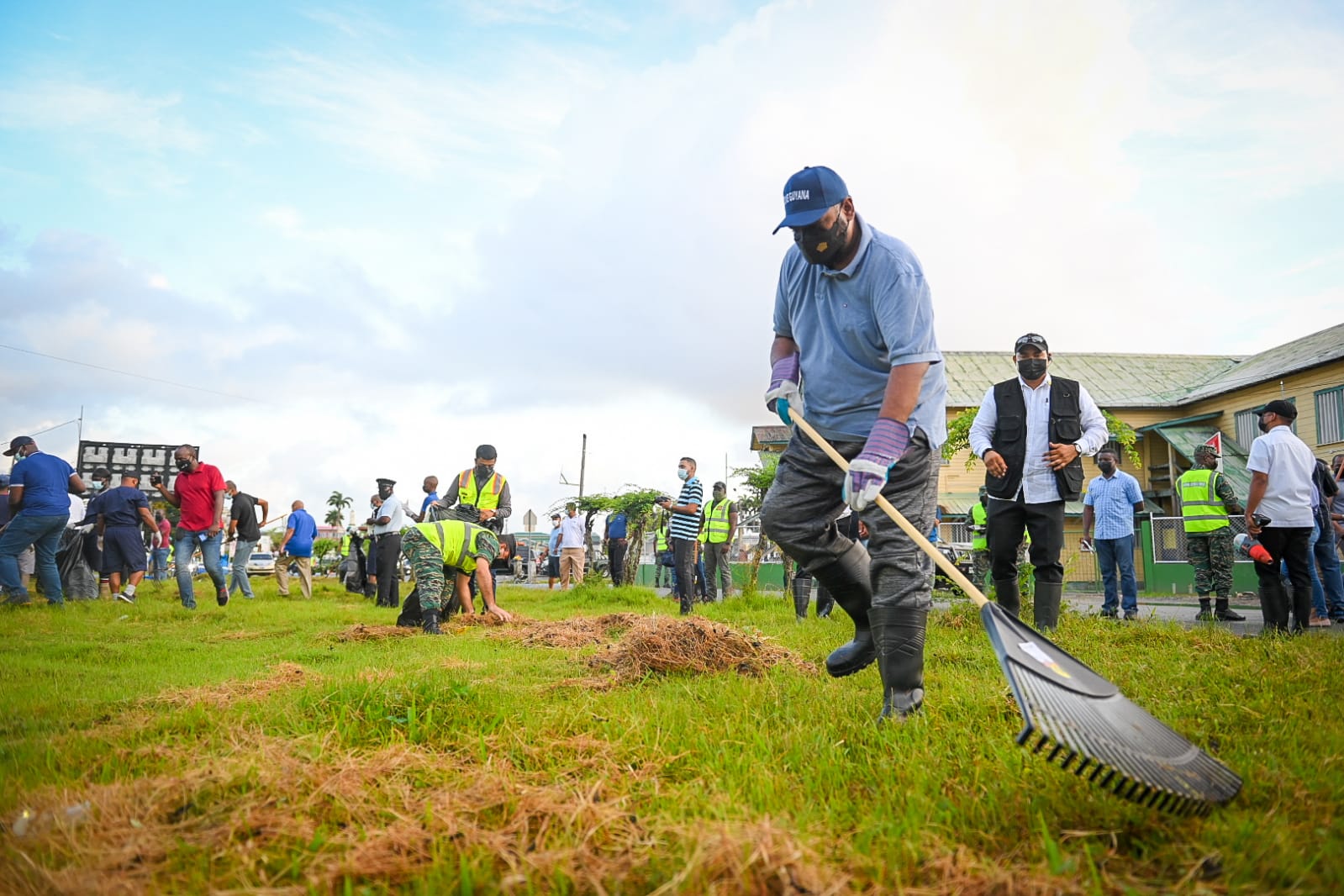 Georgetown, Guyana—(January 15, 2022) His Excellency Dr Irfaan Ali said that the multi-stakeholder clean-up campaign of Georgetown will help to create a more “family-oriented city”.

The President said that one of the aims of the massive clean-up campaign is to create a city where families “can find a safe zone in which we can build not only the relationship within families but relationships within communities”.

He noted that his vision of a ‘One Guyana’ and building the spirit of community within citizens was showcased during the Christmas season when thousands of Guyanese assembled every day to visit the Christmas Village on Main Street.

The President made the statements early this morning around the vicinity of the 1963 Monument after helping a team comprising of the Joint Services, Cabinet members, including Prime Minister, Brigadier (Ret’d), the Honourable Mark Phillips, and volunteers from the private sector and civil society, clean up the surrounding area.

To help ensure that the City stays clean, he said that cameras and police will be placed at sites where persons regularly dump garbage.

He called litterbugs uncaring and selfish for their disregard for rules and regulations and the environment.

The Head of State noted that in addition to the clean-up campaign, the Government is currently working on an urban renewal plan to transform the city. He explained that while Georgetown is not a big city, one of its beauties is that it is a “walking city”—whereby citizens can easily walk around and get their business done. However, he said, persons must be able to do this in a safe, clean and conducive environment.

To achieve this transformation early, the President said that the Government has set a very ambitious timeline for finishing a section of the walkway on Lamaha Street.

The walkway that the President has coined the “Guyana Walk” will run from Camp Street, along Lamaha Street, beyond Vlissengen Road.

He said the embankment area along Lamaha Street from Main Street to Camp Road will be restored, beautified and developed.  There will be seating areas, local food on sale, and provisions for local artists to exhibit and sell their works.

Additionally, the President said, there are a number of other areas that have been identified around the City where beautification projects have commenced. These include Drury Lane, the Seawall and the median along Carifesta Avenue and the East Coast Highway.

President Ali added that in order to maintain the new look of the City, Guyanese will have to be more progressive in their approach to each other and the environment.

“The environment is a demonstration as to how we value each other because if you can bring garbage and throw it in front of a school, in front of a church, in front of a named street, like Hadfield Street, a national monument, then it demonstrates who really you are and this is what we have to change, and we can only do this together.”

The two-day project will see the clean-up of approximately 25 sites around the city. This, the President said, is not going to be a one-off exercise and is just the “tip of the iceberg”.

He pointed out that there is dignity in labour and noted that once every month, there can be a collaborative effort between the Government, local bodies, the citizens and other stakeholders to clean respective areas.

“When we talk about countries that we admire, and the way in which they do things, these are examples as to how they built a new culture, how they incorporate what seems to be the softer side of things into the culture of the country. So maybe cleaning up is a soft exercise, but it is an exercise with critical impact on the way we live and who we are as a society.”

President Ali to hold discussions with Presidents Bolsonaro and Santokhi