People are at the centre of everything we do—President Ali 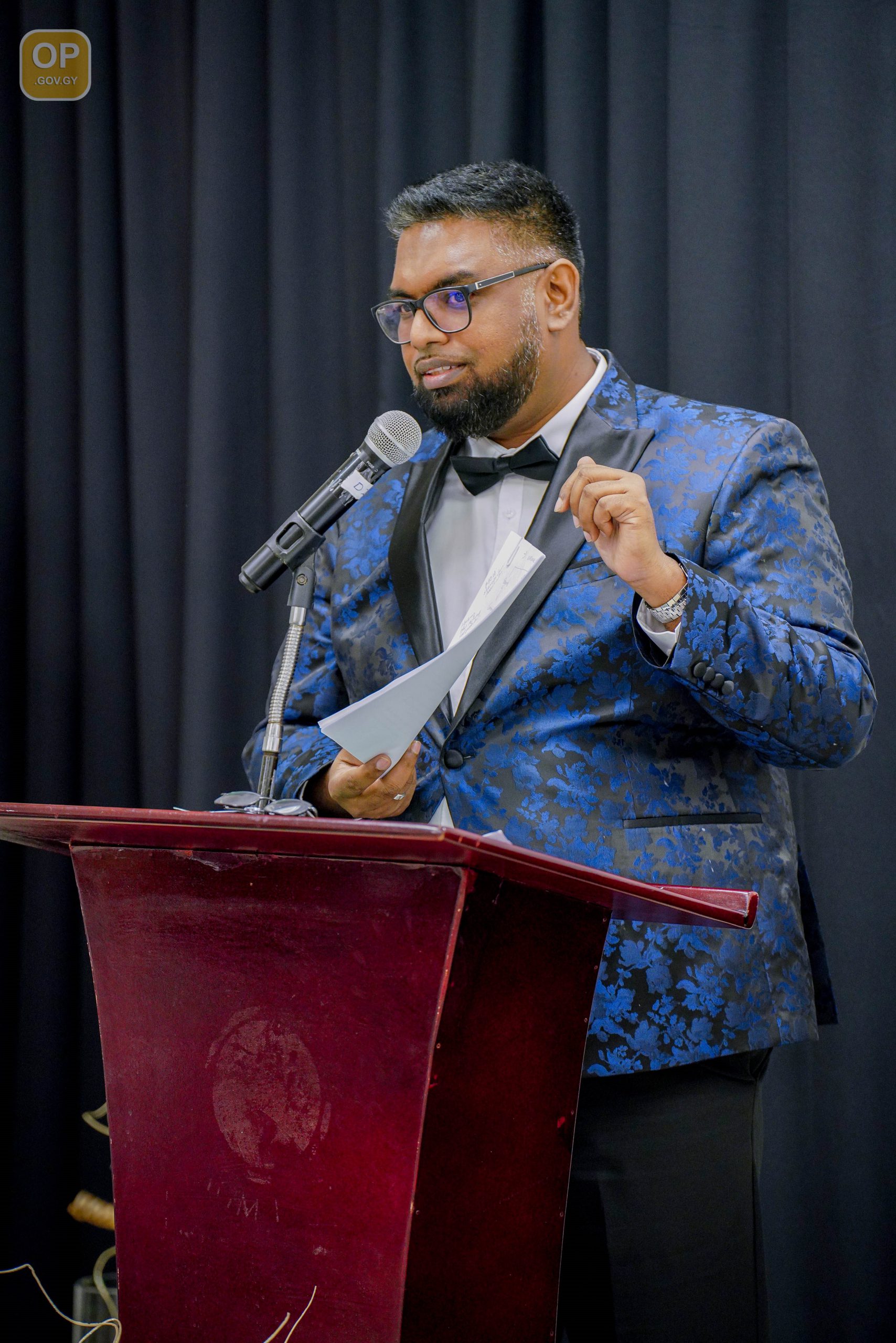 –Reminds business community of the need to enhance capacity

Georgetown, Guyana—(December 18, 2021) His Excellency Dr Irfaan Ali called on the business community to pay heed to the national development strategy and to continue working alongside the Government to not only develop Guyana but its people.

The Head of State told the Private Sector Commission’s membership at their annual Christmas Dinner at Roraima Duke Lodge on Thursday evening that they need to get serious about playing their part in the development of the country.

He reminded his audience, which included proprietors of numerous well-known local businesses, that they have a responsibility to build stronger companies, to enhance investment and job creation, while his Government had a responsibility to create an enabling environment for investments and to focus on improving the lives of all Guyanese.

The President spoke of the need to create the “best healthcare, education and infrastructure,” and about crafting activities to encourage positive growth and development—and ultimately building stronger Guyanese families.

“We also have to implement the softer strategies, and they are as critical as strategies for profit-making—we cannot build a society in which the family has no place, those programmes are the things that would create a transformative mindset that is greater than the physical road.”

He reminded the audience that the entire Lamaha reserve would be transformed into a ‘Guyana Walk’ with a local food court, craft and art.

“As simple as these things look, it is immensely transformational.  Seeing hundreds of families every night on Main Street for the last couple of days fills the heart with joy; because that is what is going to take this country forward.”

The Head of State said that the business community needs to start thinking bigger and bolder and envision the growth of their businesses in a more developed Guyana due to the radical changes that are currently taking place.

“We are not dealing anymore in an environment with small businesses and medium-sized businesses alone, and we have the most sophisticated investors that are on the international market.”

He said that his Government will create the pathway, but it’s up to the business communities to make the investments.   He pointed to the Local Content Bill, which is set for debate at the next sitting of the National Assembly on December 29. He said that it is a “living document” since it is transitional and transformational and will aid local business development.

The President added that among the most important attributes of the country are its political and social stability and its predictability when it comes to policy direction.

That policy direction has resulted in numerous big investors and even countries coming on board.

He told the PSC members that Guyana and Barbados have signed an arrangement to move forward unhindered.

“The Prime Minister of Barbados has committed to the removal of all hindrances and barriers to the goods and services to Barbados—we are pushing at open doors.”

He also said that in January, President of the Federative Republic of Brazil, Jair Bolsonaro, would be coming to Guyana for a summit between the host nation, Suriname, Brazil and France—who just recently asked to join.

“The discussion of that summit is the development of an energy corridor, linked to the deepwater harbour, facilitated by bauxite deposits on both sides of the river that could lead to a smelter of an aluminium plant that supports the investment in the deepwater harbour and also you’ve heard us talk about the potential investment opportunity coming with some serious interest for a small refinery.”

Throughout the country, the infrastructure will be upgraded. He said that roads will also be developed to facilitate movement and to create more business opportunities.  This includes the Linden to Mabura Hill road link.

“As I speak to you, the bids are completed, and the recommendation for the Linden to Mabura Hill road is at CDB (Caribbean Development Bank), and our intention is to have it awarded before the end of the year.”

He also reminded that the designs for the bridges along the road have been completed to international standards and that the Government will be financing them.

The President said that those who are not willing to push forward now will not have a chance to benefit from the opportunities.

The Head of State then went on to list a number of transformational activities that are happening throughout the country to show that it is not only Region Four that is developing.

He spoke of development in agriculture, including the soya/corn project, swamp shrimps, packaging and processing initiatives, environmental and biodiversity services, tourism, manufacturing, call centres and housing, among other areas.

As the country advances, he noted that discussions are also ongoing on how the Government can formulate a strategy that will be equivalent to a development fund to finance areas of innovation and creativity.

Local development cannot happen, however, without total support.  The President used the opportunity to urge the banking sector to do more for development.

“The bankers are innovating more and more ways to make transitions to the bank hard…it is absolute nonsense, it is not in any international requirement for a man to withdraw $25,000 and fill up a whole load of forms…so how are we even going to get to e-transaction.”

The President said that it is imperative that the existing problems are fixed since, institutionally, the systems do not support the technology.

“The banks are hopeless in customer-care and customer-handling, I’ve said it publicly, they have to fix it, unnecessary burden on customers and consumers. People are at the centre of everything we do–people are unhappy with the system.”

Overall, the President said that due to the magnitude of the investment potential coming to Guyana, the future will be very progressive and that the Government will continue to be innovative.

He reminded the PSC that the entire service of ExxonMobil has migrated from Trinidad to Guyana and that it proves our ever-developing capacity and potential.