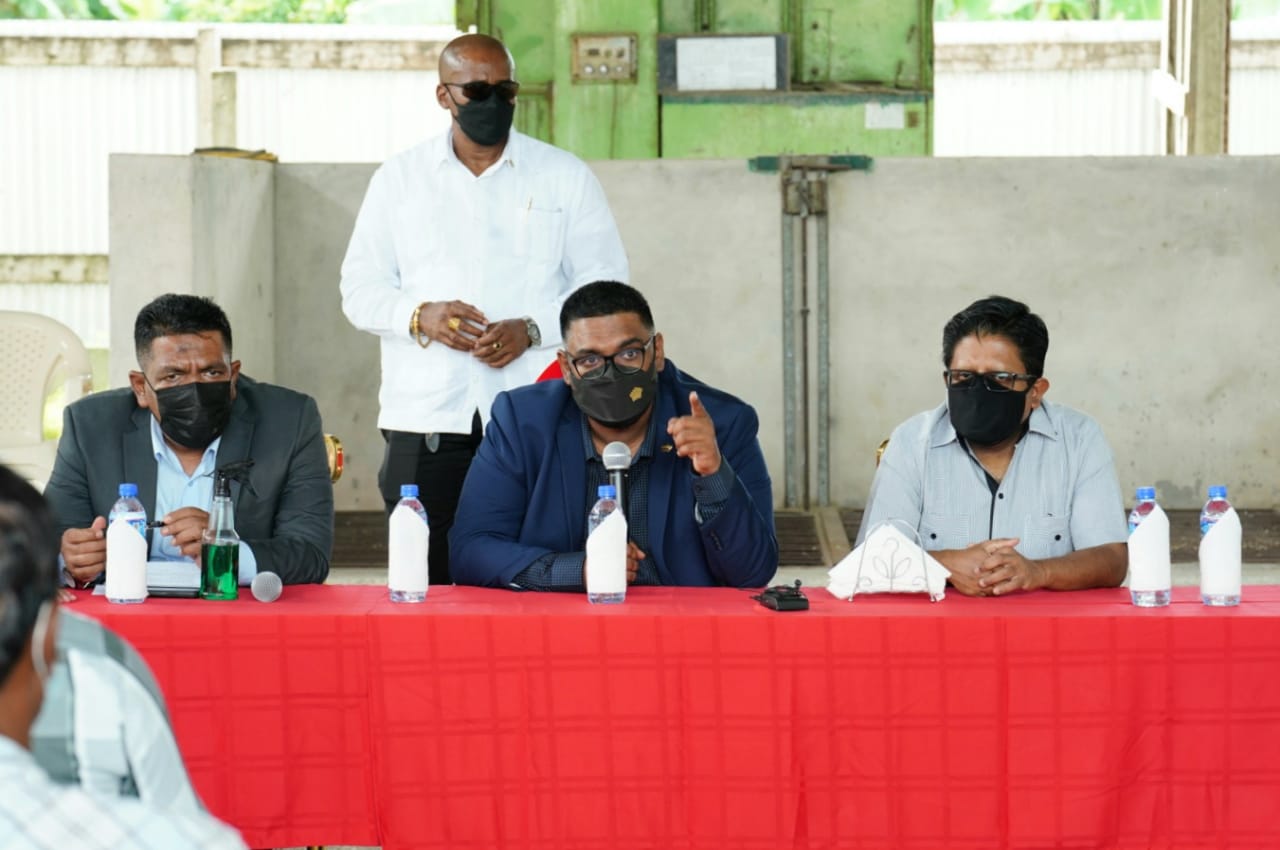 Anna Regina, Pomeroon-Supenaam—(November 26, 2021) His Excellency Dr Irfaan Ali today reiterated to farmers, mostly rice producers, of Pomeroon-Supenaam (Region Two) that his Government will continue to work with them to address the issues that are currently facing the industry.
The President, Senior Minister within the Office of the President with responsibility for Finance, the Honourable Dr Ashni Singh, and Minister of Agriculture, the Honourable Zulfikar Mustapha explained the global supply challenges that are contributing to the rise in prices and the lack of supplies.
During the discussions held at the Guyana Rice Producers’ Association bond in Anna Regina, the President noted that he had been proactive in his visits to the region via a cabinet outreach and a presidential outreach.
He said that since his last visit in September, the Government has been able to resolve more than 120 land issues and more than 100 National Insurance Scheme issues.
“You raised issues about passport office; we established a full passport office here. Since it has been established, it has received 229 applications, and we have already processed 221.”
The President also reminded the farmers that they have his Government’s support.
“I am here to work with the farmers to genuinely improve your stocks….Every single day we are out there fighting for farmers, fighting for every Guyanese. So, we are in this together. If you sink, I sink, if I rise, you rise—it’s a simple equation.”
In September, one of the main issues that farmers raised was the rising price of fertilisers which were affecting their output.
Minister Zulfikar explained that since the issue was raised, the Government was able to influence the reduction of the price for the two types of fertilisers by 10% and 18%.
The President disclosed that today he was able to speak to the fertiliser dealer and had prices reduced by a further $100.
GLOBAL ISSUES
The President also took time to explain and reiterate to the farmers that the rising cost of fertilisers and other goods is out of the Government’s control.
“The Minister of Agriculture will tell you what is happening in the industry. And then I will tell you what more we are doing to try and help you because you know what is going on right now. The price of natural gas is skyrocketing, and natural gas is a key ingredient to produce fertilisers. We don’t have control over that. Understanding that I’ve been reaching out, we have meetings every day with other countries to try to resolve this issue.”
The President pointed out that the Government has been in meetings daily with other countries to try to directly resolve the issue and bring further relief to the farmers.
Minister Singh also spent time explaining the other external factors that are affecting the country. He noted that the global supply chain has been severely affected as a large number of freights have not been able to move from their ports, which has directly resulted in a significant increase in the cost of shipping.
“In some of the richest countries in the world, shelves are empty for Christmas this year. That is what is happening worldwide,” Minister Singh said.
President Ali also took time to answer questions and resolve issues that the farmers raised on the spot.