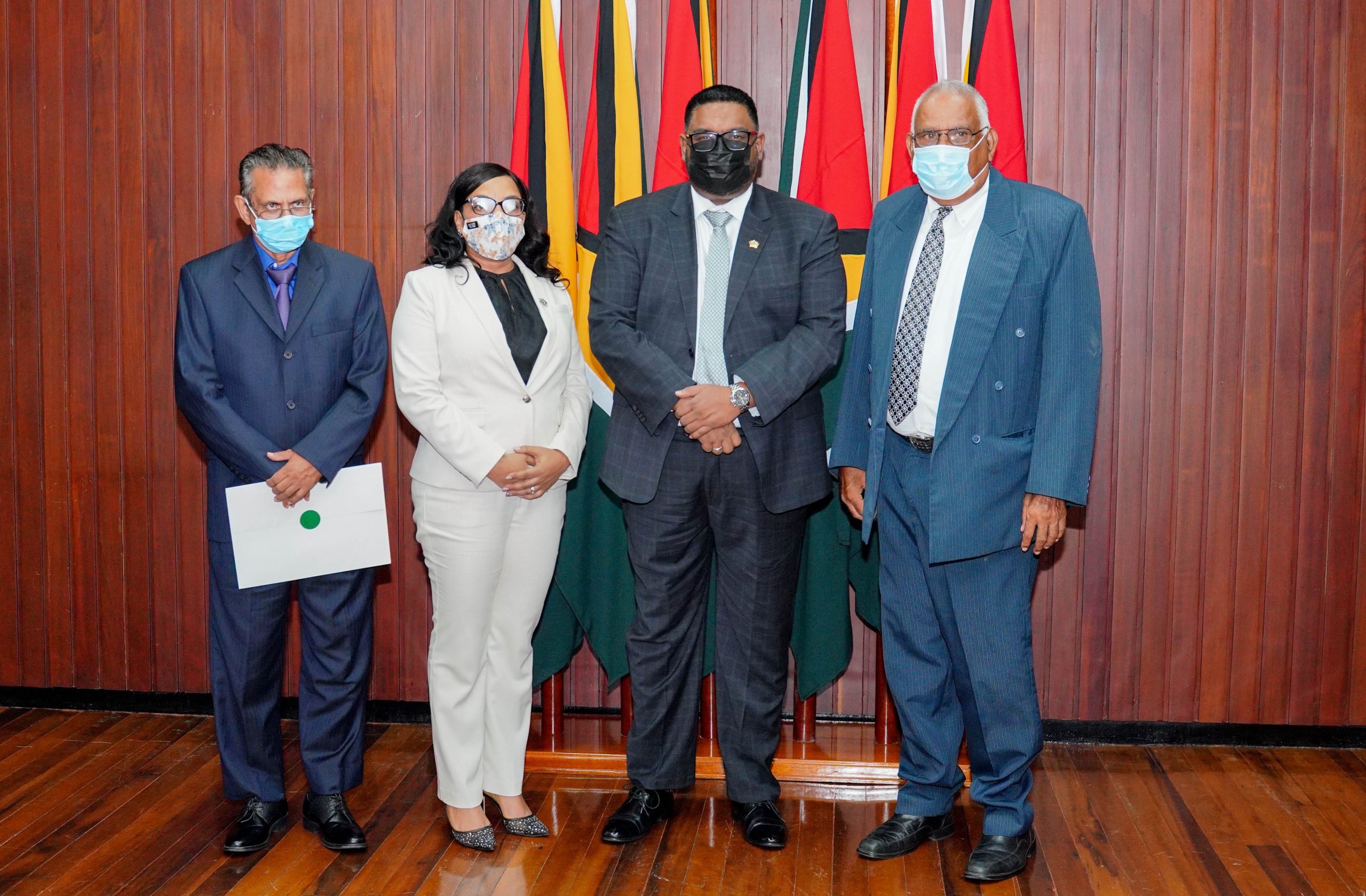 Georgetown, Guyana (November 11, 2020) His Excellency Dr Mohamed Irfaan Ali, earlier today, made commitments to improve and retool the Public Service to adjust to the growing economy after swearing in the new Public Service Appellate Tribunal.

Former Appeal Court Judge Nandram Kissoon will again serve as Chairman of the tribunal, also returning as a tribunal member is Attorney Abiola Wong-Innis.  The other member is former Permanent Secretary of the Ministry of Public Service, Mr Hydar Ally.

The three members were administered their oaths at the Office of the President.

In his address, the President stated that the protection of security of tenure is necessary to improve professionalism in the Public Service and that his Government is committed to this task.

“I not only want to congratulate you, but I want to wish you well. And I’m sure the public servants will have the confidence in you, in ensuring that their security of tenure and their ability to have a court of redress outside of the judicial system is secured.”

The President said that the Appellate Tribunal would be important in protecting the security of tenure of public servants by affording them the right to appeal decisions of the Public Service Commission as it relates to appointments, discipline and dismissals.

“In this view, the tribunal provides recourse against decisions of the Commission, which public servants may wish to challenge or content. The Tribunal therefore is part of the system of administrative justice within the Public Service.”

The Head of State emphasised that the Government has a responsibility to ensure that investments are made in the human resources capacity. He said that it is necessary to make Public Service more efficient, reliable and in keeping with National Development priorities.

He added that professionals must no longer view the Public Service as a form of apprenticeship, but as a long-term destination.

President Ali also announced that the Public Service is being reorganised to make it more service-oriented and efficient. He said the goal is to have a Public Service that provides timely and quality service to citizens whereby eliminating “the royal-run-around”.

“We want public servants who are productive and who provide value for money. We want a Public Service which is equipped with the skills necessary for national development. The Public Service is being restructured to be able to attract and retain highly skilled individuals.”

The President added that improving the efficiency and effectiveness of the Public Service is imperative given that Guyana is poised for rapid development.

President Ali added that a growing and diversified economy will demand qualified, trained and skilled individuals in the Public Service. He said that moving forward, changes will also be made on an individual level as it relates to public servants.

“Citizens are entitled to courteous and efficient service. People often have to travel long distances to seek Government services such as births and deaths certificates, pensions, school placements and health services. Public Service must ensure the minimal of inconvenience for members of the public. They must be assured of efficient and satisfactory service.”

To achieve this change, the President said that Government will continue to train, retool and develop public servants.