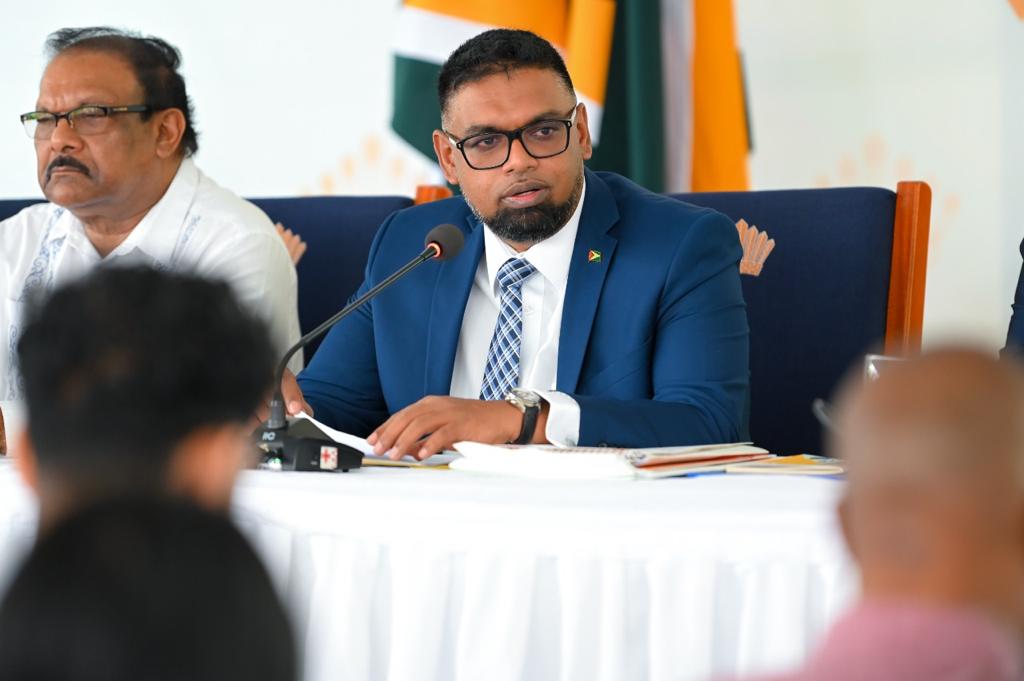 Georgetown, Guyana (January 17, 2023) His Excellency Dr Irfaan Ali said that India can be seen as an important strategic partner in the development aspirations of the Government and the private sector for the benefit of all Guyanese.

The Head of State made this assertion during a press conference held at State House this afternoon to discuss the outcome of his seven-day Official Visit to the South Asian country.

The engagements with Indian officials, including the country’s Prime Minister, Shri Narendra Modi, he explained, were in keeping with Guyana’s development trajectory.

He said that the Guyanese delegation, which included Government officials and members of the private sector, “had engagements with some of the leading private sector organisations, companies, industries” and senior members of the Indian Government, “in pursuing a very targeted approach to what we wanted to achieve as a country, and to see how India can be an important strategic partner in the development aspirations of our country, our private sector, and our people”.

The President said several areas were discussed with Prime Minister Modi, which are aligned with the shared vision and commitment of both countries, but that agriculture and food production was a strong pillar that underpinned the discourse.

“Agriculture and food production is a key element in our development aspirations and a key element of the leadership that we are providing in the region.”

He added that there was also “tremendous interest” in having close collaboration with Guyana’s agri-food system, the ecosystem surrounding our food production and agriculture, and enhancing the productivity of our agriculture sector, focusing heavily on sugar.

“GuySuCo was a main area that we focused on. Aquaculture is another area that has tremendous opportunities for us and the utilisation of technology to support the increased production and bringing the best production system in our country.”

President Ali said that specific, targeted discussions, were also held in relation to oil and gas and India being part of the development of the sector.

He added that the Indian Government also expressed a “strong interest” in being a long-term purchaser of Guyana’s share of oil.

Stemming from the meeting between the two leaders, it was agreed that two working groups will be formed to move forward with ideas and proposals.

Government officials will focus on different areas of development within the working group with the Minister of Foreign Affairs, the Honourable Hugh Todd, coordinating, setting up the mechanism and finalising the terms of reference (TOR).

President Ali indicated that a Memorandum of Understanding (MoU) will soon be signed between the two countries in agriculture.

He said that this would allow India to assess the profitability of the coconut industry, rice, dairy and sugar and other crops.

“They are willing to provide experts to come and work with us, the technology, the equipment to support, improve efficiency, yield and profitability.

He also pointed to an MoU following the engagement with the Bangalore Bioinnovation Centre, which will see the deployment of all the technologies, that have been tested and successful to help develop the Small and Medium-sized Enterprises (SME) and the agriculture sector in Guyana.

The country is expected to benefit from the Indian company’s expertise in the important areas of agriculture, biotechnology for food and nutrition and environmental biotechnology.

President Ali said that Vice President, the Honourable Dr Bharrat Jagdeo, will lead a delegation to India next month to follow up on all the areas outlined.

The private sector representatives spoke of their fruitful and productive engagements and highlighted a common theme of enhanced networking and partnerships.

Mr Cheung lauded President Ali for the leadership shown and for “opening doors for the private sector”, while Mr Khan spoke about the opportunities and lessons learnt from the visit. He also disclosed that three strategic MoUs were signed with the GMSA, in waste-to-energy (biomass), furniture manufacturing and machinery.

Government wants to build partnerships with every community—President Ali