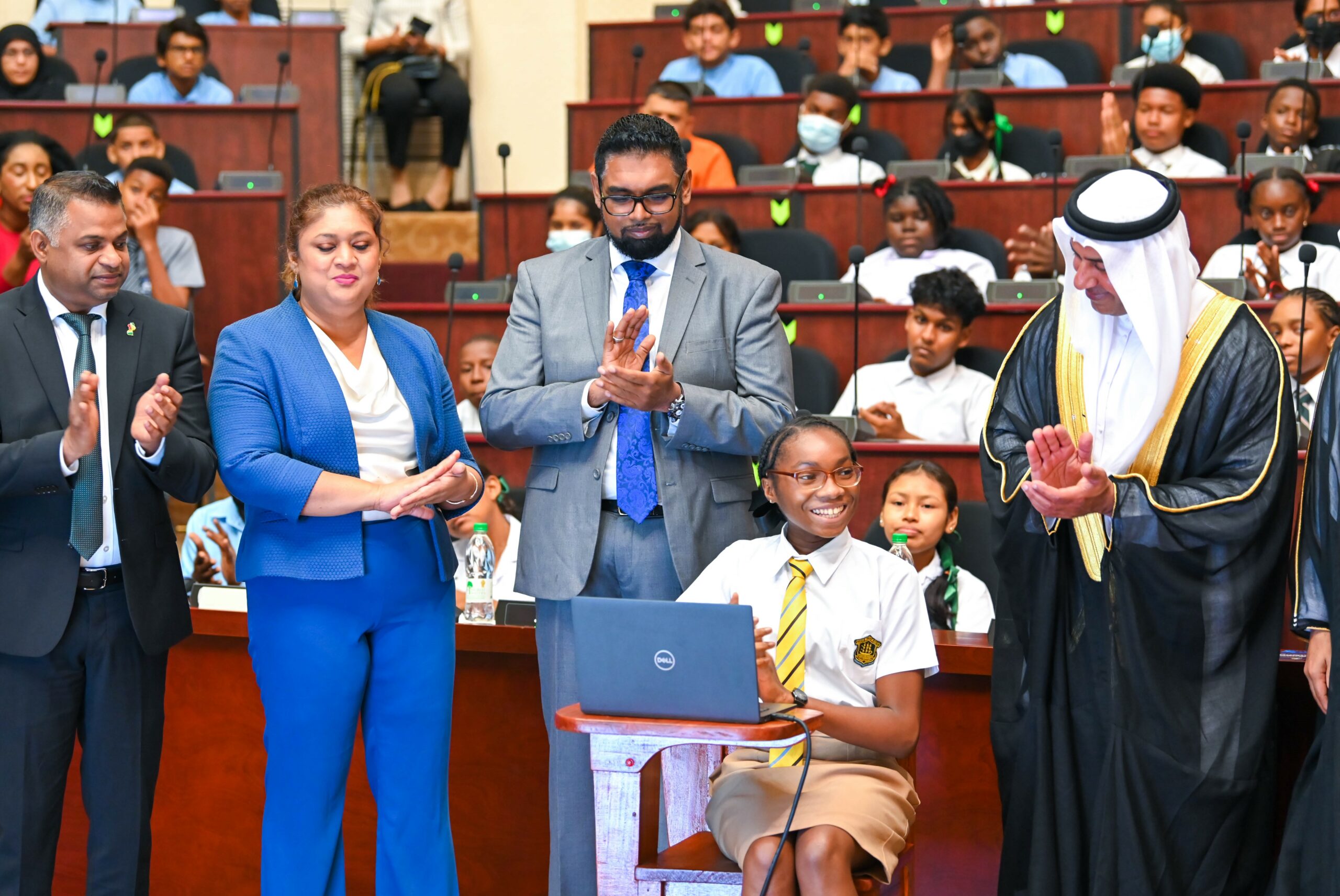 Georgetown, Guyana—(December 14, 2022) His Excellency Dr Irfaan Ali said that the 150k Guyana Coders Initiative, launched today, will prepare and equip Guyanese youth with the skillsets they need to be globally competitive from 2030 and beyond.

The project would also be available to young people in the Caribbean as President Ali explained that the Government of Guyana wants them to likewise benefit.

“This coding project must be one that is available to all our brothers and sisters in the CARICOM region, and Guyana is ready and willing to be that hub….I want our children in CARICOM to know because they are your brothers and sisters in CARICOM. They are our extended immediate family, the children of CARICOM. I want them to know that Guyana is battling for them today.”

He told stakeholders, and students at the Arthur Chung Conference Centre, during the inauguration of the project between the Government of Guyana and the United Arab Emirates that Guyana’s Minister of Education, the Honourable Priya Manickchand, will lead the regional charge.

“…I’ll ask the Minister of Education to ensure that she reaches out to all our colleagues in the region to bring them on board with this programme.”

The President said that in 2021, approximately 26.9m persons across the globe were software developers and that this number is expected to rise to 45m by 2030.

Guyana and the Caribbean, he noted, must also be a part of this needed development.

He said that at the national level, the objective is to ensure that Guyanese are “competitive, resilient and functional”.

“We’re ensuring that we, as a country, have the tools that would take us forward, that will ensure our economy is among the strongest. And what is the most important element to ensure this? You, the people, the children of tomorrow—the young people.”

The Head of State also noted that the programme will not only be available to public school students, but also to those from private institutions.

He also called on the business community to aid in the execution of the initiative.

“We are opening this up to the private sector. We want corporate Guyana to open your offices after work and welcome children from the community to be part of this programme, utilising your facilities. You have this responsibility to share with our society.”

The 150k Guyana Coders Initiative is geared at enhancing Guyanese and Caribbean youth with skills such as animation, web development, software engineering, IT technicians, systems administrators, and cyber security analysts, among others.

During the programme launch, the www.guyanacoders.gov.gy website was also launched.

The Head of State also noted the development of data banking and data centres are key service-oriented business opportunities that Guyana will pursue. He explained that he has already tasked the Attorney General and Minister of Legal Affairs, the Honourable Anil Nandlall, to work closely with the UAE to understand “how the business works”.

“We want to, before the end of this year, lay in the National Assembly legislation to support data banks and data centres in Guyana. So that is something that we are targeting because we see this not only as an important step in the future, but we see this as an important business and economic opportunity.”

President Ali also praised the relation between Guyana and the UAE and explained that the programme is a manifestation of the excellent relationship between the two countries, one based on trust, human dignity and the establishment of an economy that is strong and resilient.

“I want to say that the UAE as a partner has been nothing but outstanding. The relationship that we share is one that is admirable…The level of commitment backed by action from the UAE is something all of us must applaud, and I want us to applaud the Government and people of the UAE.”

President Ali reminded that in March of this year, a MoU was signed between the two countries that focus on cooperation in the field of government development and modernisation. A number of areas, including government services, government accelerators, programming, statistics and competitiveness, smart services, government performance, innovation and excellence, leadership capacity building, strategic foresight, planning and strategy management, have been identified as essential areas of development.