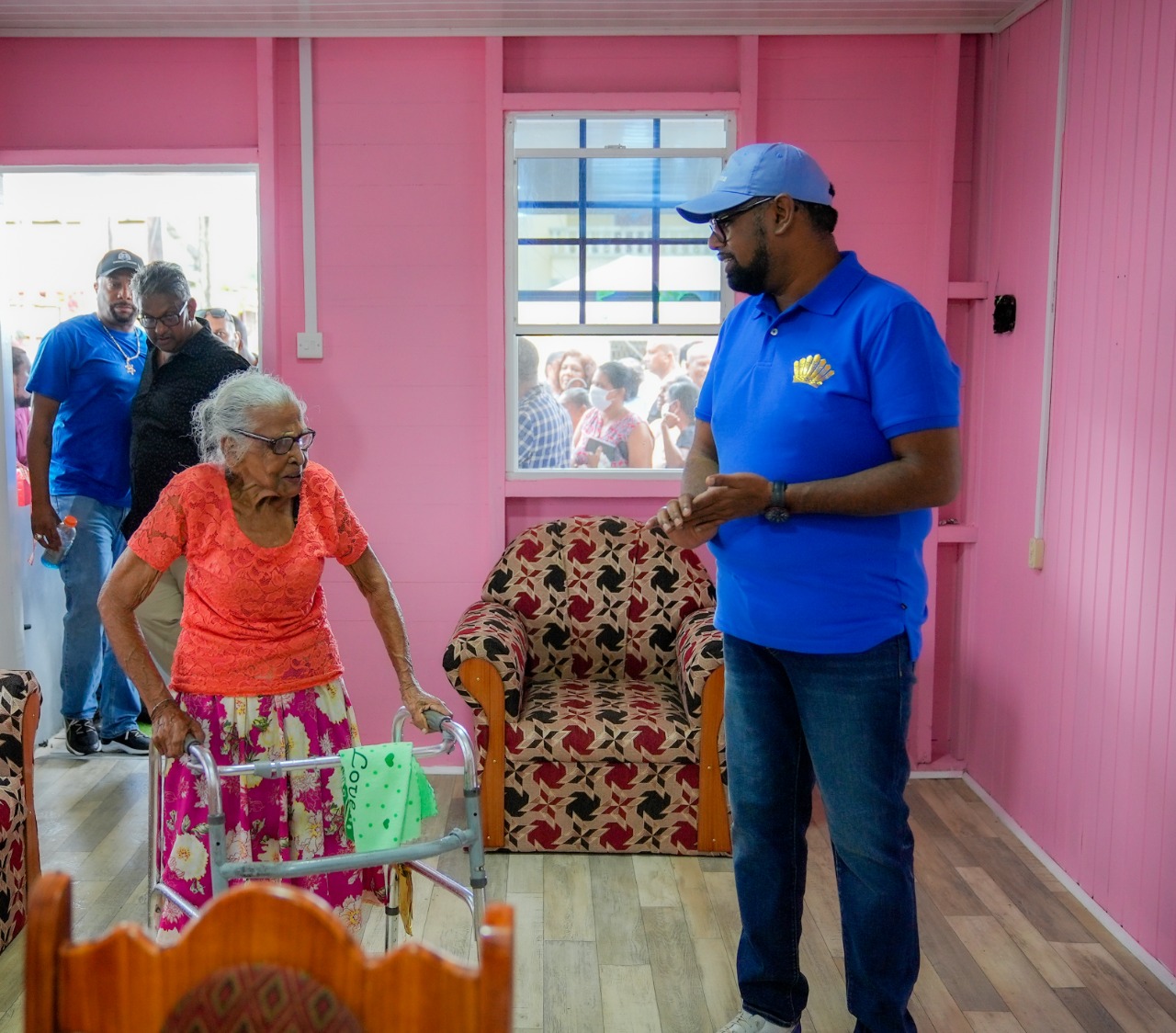 Georgetown, Guyana – (December 11, 2022) His Excellency Dr Irfaan Ali said that the Men on Mission (MoM) initiative that he is leading will help with the construction of approximately 150 homes across the country for vulnerable persons who own their own house lots.

The Head of State made the remarks during a simple handing-over ceremony where he presented 85-year-old Herstelling, East Bank Demerara resident, Meena Bafan with the keys to her newly built home.

“I think this is a real testimony to who we are as a people, as a country, when we can come together like this, and work with the private sector, led by the private sector to do things like this, and this is what is going to transform our country—the way we think and feel about each other. When we can come together; people of all, all persuasions, whether it’s political, social, cultural, ethnic, coming together and working together to deliver good things for citizens across our country.”

This, the President said, is what is going to cement the country as ‘One Guyana’

He explained that MoM is going to be very active in 2023.

The Head of State explained that the banks have already been engaged and are willing to finance the projects, once persons own their own lands. Interested persons are urged to contact the offices of the Police Commissioner and the Chief of Staff of the Guyana Defence Force to register.

“So a house like this, we will work with to deliver everything you see here for about $5m for anybody who has their own land anywhere.”

President Ali also noted that it is not only Government that should be praised for the initiative but also the private sector.

“These guys are willing to actually reduce profit lines and everything for the wood and labour, which is one of the most critical thing for us.”

Expanding the project, the Head of State also posited that the Government will explore the option of providing the Guyanese-Venezuela migrants who have returned with jobs. This, he said will be complemented with workers from Albouystown and other similar communities throughout the country. These workers, the President noted, will be trained thoroughly in carpentry and masonry.

The Head of State also noted that in the new year, there would be a “massive push with community involvement,” which will see all the small pathways and roads rehabilitated. Tree-planting exercises and other community infrastructural works will also be done by the communities.

“So while the last two years, we’ve been focusing heavily on the transformative agenda. I think next year will be a massive push on community development, village development that really pushes people development also.”

The Head of State also emphasised that he does not want MoM to become a reactive initiative but a proactive one that is spread across the entire country.

He also noted that on the last Sunday of January, MoM is planning a “Home with Dad” event.

President Ali announces launch of bid round for offshore blocks