Georgetown, Guyana—(October 29, 2022) His Excellency Dr Irfaan Ali said that the ‘Men on Mission’ initiative is a movement aimed at impressing upon men the importance of responsibility, being role models and demonstrating a collective will to shoulder a progressive system to support Guyana’s developing society.

The Head of State made this statement on Friday evening as he delivered the feature address at the launch of the ‘Men on Mission’, the 1000 Men, One Guyana initiative, at Camp Ayanganna in Georgetown.

“We are dedicating ourselves to not being part of the problem but doing something about the problem; to bring about a permanent solution and create positive momentum to the future generations of Guyanese. Men can be better, can be more involved—can be role models.”

The President said the initiative will equip men in society to deal with complex problems, inclusive of violence against women and children, while helping to bridge the existing gaps, including the need to advance themselves in education.

The President outlined several jarring global statistics regarding the life expectancy of men, their mental health and their level of education, noting that these statistics point to the reality that “something is going wrong”.

He said that ‘MoM’ is aimed at reversing these negative trends and creating a movement through which there is a “greater appreciation amongst men.

An important part of the initiative, he added, is to work with young people to provide coaching, mentoring and motivation. It is also geared towards creating a new movement through which there is a greater appreciation among men for the way they take individual and collective action.

President Ali also lauded Guyanese women for their strength and for shouldering responsibility.

He said many men have dropped the ball at the societal and family levels.

The President also spoke of abuse and its adverse effects and charged men to do better through the ground-breaking initiative. He called on the men present to “make the change” and to drive the change; he urged them to lead the movement with respect, dignity and pride.

“It’s about demonstrating a collective idea of creating a new system, an institution that supports a modern society that is built on a foundation that will see no longer in the headlines- ‘violence against women and children.’ Those are the deadly mark of the devil. And we have to all dig deep inside of us and remove those dark, evil forces that allow us not to be the best we can be and to support the best way we can support.”

The Head of State asserted that the country’s transformation goes beyond infrastructure and finances and involves the transformation of the minds and hearts of each individual.

“It is a transformation of ourselves. It is finding that inner beauty in ourselves. And while I lead on the highly technical things and the sophisticated matters. I also intend to lead on these human matters that must be addressed, that are fundamental to our existence. That is the core of driving change.”

President Ali said that all men across the country must be willing to play their part in rewriting this truth and repositioning our country, society and people.

“Today, our voices must be heard across the world—that in Guyana, the men are coming together to end this cycle of injustice against women and to take their load of responsibility in creating a system that will realise their full potential as men.”

Dr Ali committed to doing his part at every level “to be part of the solution”. He said that ‘MoM’ will positively impact all men.

“The men who are wandering around, we have to bring you back into the workforce. You have to be willing and ready to be retrained and retool. We are short on labour in this country, and yet we have men wandering around. ‘Men on Mission’ will gather you in the flock and bring you back to the reality that you must be reintegrated back into our society. This is not the time for us to point fingers. This is a time for us to come together to believe in each other and to realise that we can only do this as a collective.

A broad-based national committee has been established to spearhead the effort. The committee is headed by the Chief of Staff of the Guyana Defence Force, Brigadier Godfrey Bess.

The launch of the initiative saw the participation of government officials, members of the Diplomatic Corps, members of the Armed Forces, and thousands of men from across all sectors of society.

By the end of the launch on Friday, several thousand men had registered to be part of the ground-breaking initiative. 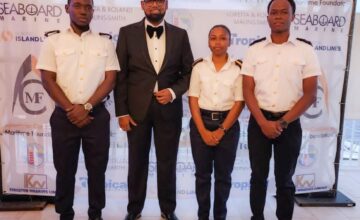 National Marine Strategy to be crafted for Guy 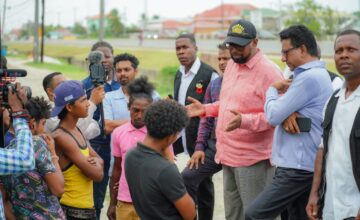 Annandale roads and drains will be rehabilitat