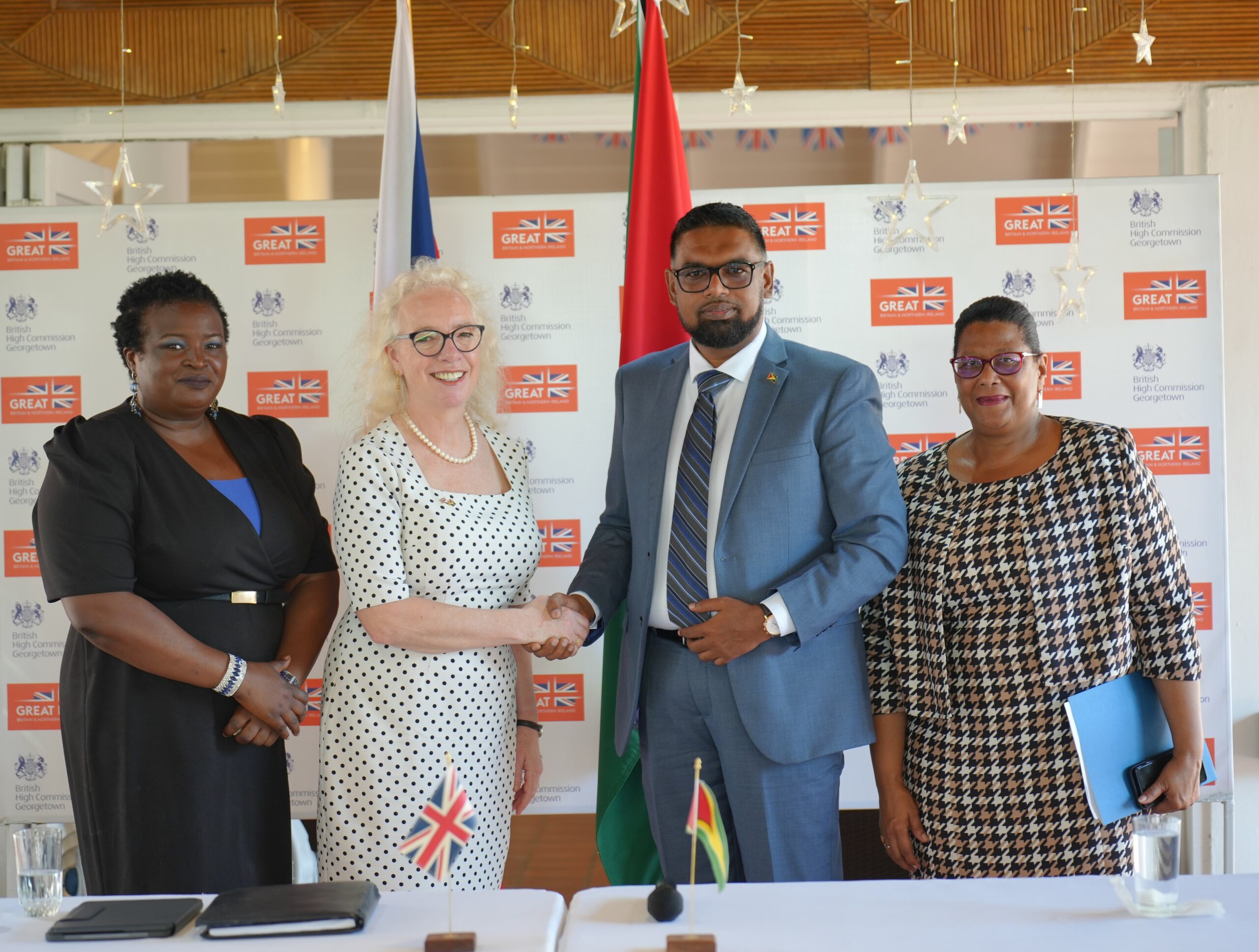 Georgetown, Guyana—(October 18, 2022) His Excellency Dr Irfaan Ali said that the benefits of today’s announcement of the UK visa waiver are not isolated to strengthening relationships and building out opportunities, but it is also an important pillar in developing people-to-people contact.

The Head of State said that the two governments aim to expand bilateral relations with the hope of further investments, including in the expansion of Guyana’s tourism market.

“We have been working on the expansion of this relationship. We have had two visits to the UK—we are hoping to also have a high-level visit from the UK, which we are pursuing. And we have had exchange visits from the mainstream private sector and individual private sector groups.”

The visa waiver announcement was made at the residence of the British High Commissioner to Guyana, H.E. Jane Miller, during a press conference.

In his remarks, President Ali explained that the move was something that his Government has been pushing for and credits the UK Government for its approval.

“Today’s announcement comes with very hard work … the High Commissioner herself has been pushing this agenda. It was one of our priority areas in our meeting with former Prime Minister Boris Johnson. We raised it on several other occasions. I must say, we also raised it in the meeting with King Charles, and the team both in the UK and in Guyana pursued the objective, and today I’m very pleased that Guyanese can travel with greater ease to the UK.”

This announcement, the President added, also opens “immense opportunity”, not only in the area of trade but in viewing Guyana as an important hub in servicing the region.

He said that the Government will look to secure direct flights and “more UK financing” for our infrastructure and transformative projects.

President Ali emphasised that this decision is a demonstration of the UK’s confidence in Guyana and Guyanese and it should not be taken for granted.

“We have a responsibility to safeguard these decisions—they come with hard work and take a long time, and we will be working very closely with the UK in strengthening our systems to ensure there is proper monitoring and to ensure that there is no abuse of the system.”

The President assured that his Government will continue to engage with representatives from the European Union (EU) to also “bring some ease” regarding the Schengen processing and requirement.

GUYANA AS A “TOP-TIER COUNTRY”

He noted too that the UK will continue to be a strategic partner for Guyana in several sectors, including energy transformation, even as Guyana positions itself as a “top-tier country”.

The objective, the President explained, is to place Guyana as a global leader in a number of areas, including ecological services, environmental services and climate change.

High on the agenda is to also place Guyana as a top-tier country in the world when it comes to global energy security, food security and human resources.

“We are now making the investments to have the most capable human resource capacity and capability globally—a highly-skilled, highly-trained human resource pool not only to aid our transformational agenda but to be part of a global mix. That is why we are going after, as I said before, building Guyana’s economy 2030 and beyond”.

Meanwhile, High Commissioner Miller explained that the visa lift would take effect from November 9 and is not applicable to persons seeking to work, study, or settle in the UK.

She reiterated that the removal of the visa requirement is a “real sign” of the growing Guyana-UK relationship.

President Ali’s address at the panel discussion on the Hand-in-Hand Investment Forum at the United Nations Food and Agriculture Organisation’s World Food Forum.