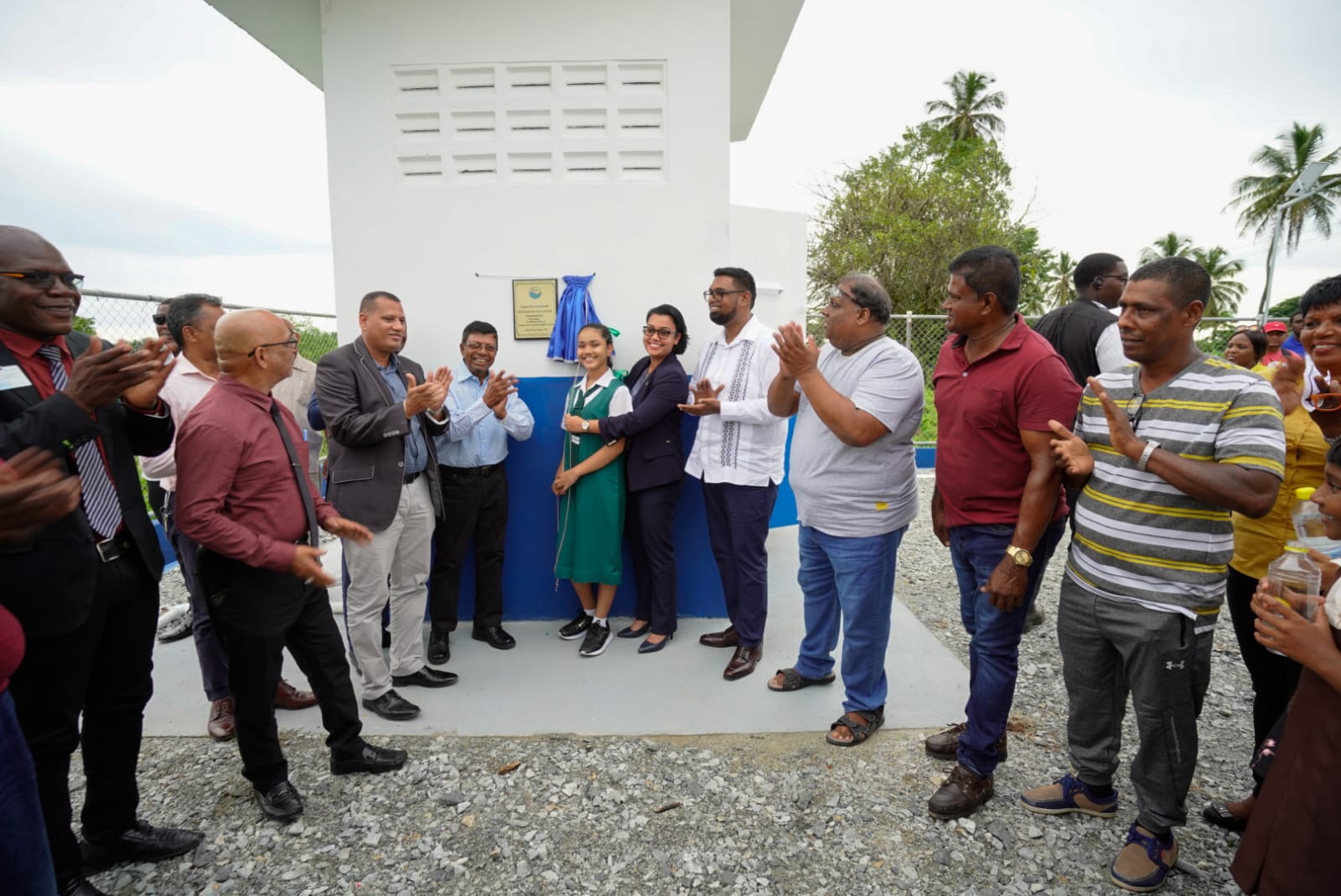 Georgetown, Guyana— (August 23, 2022) His Excellency Dr Irfaan Ali told residents of Wakenaam that while the newly commissioned well at Noitgedacht will bring 24 hour access to water, the investment in the infrastructure will also lead to the economic prosperity of families.

He stated at the commissioning of the new facility that in order to get Wakenaam and the rest of Guyana equipped for the food production revolution, infrastructural upgrades are imperative.

These upgrades are necessary, according to the Head of State, to improve the production and productive capacity of the country and to reduce the cost of production, while building and maintaining standards to enter regional and international markets.

“It is for this reason that we are making investments in every single region, targeting the economic output that will bring prosperity to every single family. And we see Wakenaam as an important island that will play a critical part in the development of our food production system for the Caribbean. Therefore, we cannot look at the infrastructure investment and development in isolation of the macro plan.”

The well, the President added, is a positive start and will benefit approximately 3500 residents.

“This water facility here must be linked to something bigger, something that would not only give you a good supply of water but lead to the eventual economic prosperity of families. You must be excited to be part of the development and expansion growth of this Island.”

The $50m well is part of the Government’s wider developmental plan; additional investments in infrastructure include the rehabilitation of roads, sea defences and provision of drainage and irrigation equipment.

The construction of the well by the staff of GWI, the President added, has resulted in a 50 per cent reduction in cost, with a design life cycle of 30 years.

President Ali announced that a US$6.3m water treatment plant will also be constructed in Noitgedacht to provide 100 per cent treated water to residents.

“If you look at the rate of return from a truly financial modelling, you will say don’t make the investment because the population is too small. And many countries in the world would make a decision based on that. But I want to tell you that we have already made the decision that we are going to make this investment on your behalf because we believe in equitable development… for all of you.”

President Ali, while outlining the massive investments expected in Wakenaam, announced that the Government will also be investing in a 750-kilowatt solar power system at a cost $2.3m to provide clean and reliable energy to the residents. This system, he added, is expected to commence within two months. He further explained that in the next three years, the entire road network on the Island will be done in phases. Already, $500m has been expended on drainage, irrigation, and sea defence.

While pointing to the investments already made as well as the developmental plans in the pipeline, the President emphasised that every intervention made is to ensure that the lives of the citizens across Guyana are transformed.

“These are the investments that will transform lives.”

President Ali reiterated that this drive fits into the ‘One Guyana’ mission to ensure prosperity for all of Guyana.

The Minister of Housing and Water, the Honourable Collin Croal, stated that in keeping with the massive housing drive underway in Region Three, a number of wells are being rehabilitated at Fellowship and Vergenoegen on the West Coast of Demerara and in Free and Easy in Wakenaam.

Meanwhile, Chief Executive Officer of GWI, Shaik Baksh explained that the current production of the well is more than 200 per cent of the total daily water demand of the Island.

The Minister within the Ministry of Housing and Water, the Honourable Susan Rodrigues and other Government and regional officials were also at the event.