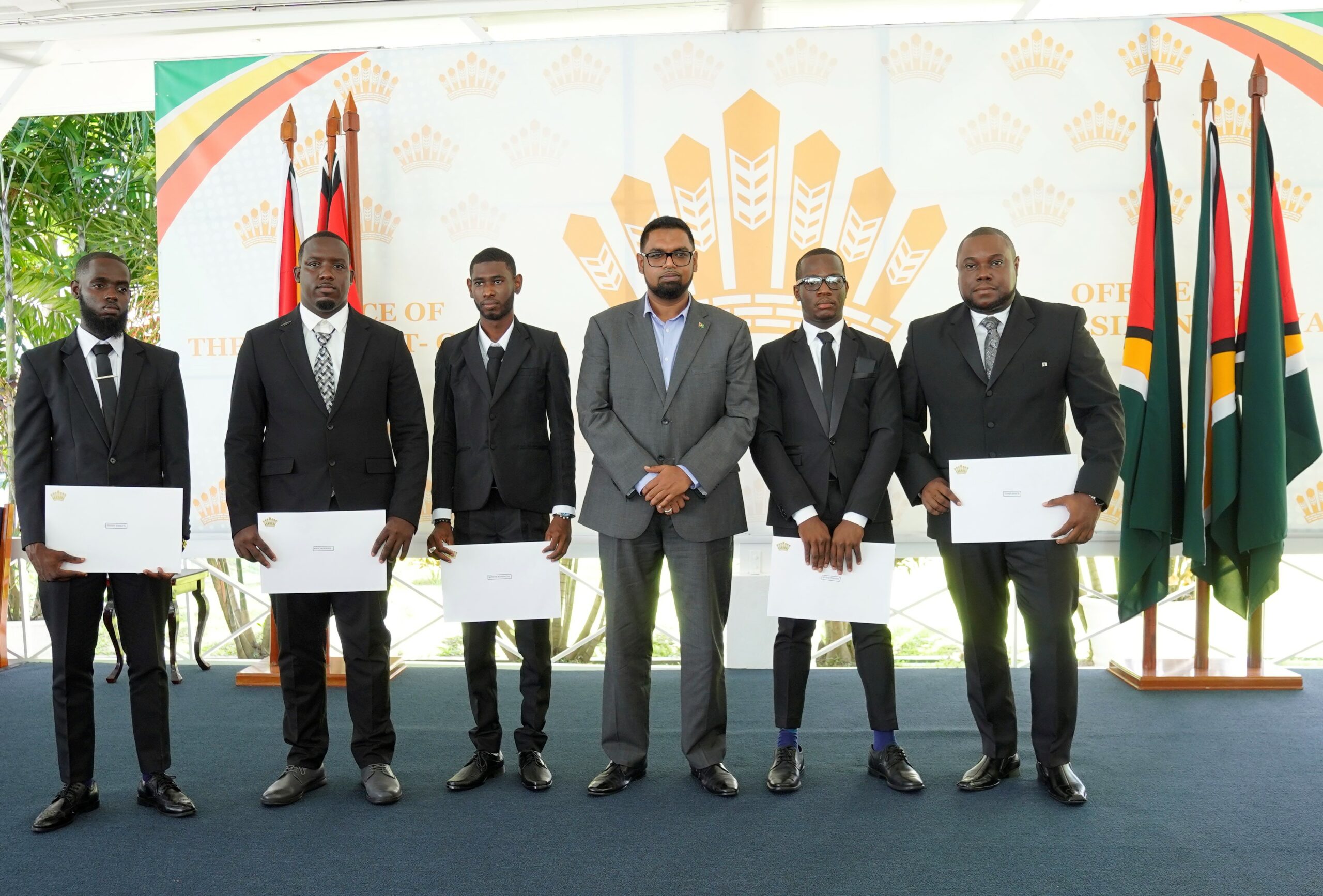 Georgetown, Guyana—(August 10, 2022) His Excellency Dr Irfaan Ali announced plans to develop a Land Surveying Institution in Guyana which will serve the entire Caribbean as well as countries in Latin America.

“Our vision is to create a land surveying institute in this country that will provide services for the entire Caribbean and Latin America. We must be in a position in three years to have such a skill base that we can be tendering in every other jurisdiction to provide surveying work.”

The Head of State made this disclosure as he swore in five new land surveyors at State House today.

To facilitate this vision, President Ali pointed to the need for improvements in the training and skill development of future candidates. This he said will bolster their knowledge and address any existing gaps.

“So before we embark on the examination of students in the future, there are three things I want to suggest that must be put in place from the next programme. We must have the Ministry of Education working with you on the development of three manuals, specifically for the industry; a manual on mathematics, a manual on writing skills, language and a manual on geography for the national landscape.”

He noted too that the revenues from oil and gas will help to position Guyana by ensuring that the right technology is acquired and the country’s human resources are trained.

The President also underscored the importance of changing the way Guyanese operate in light of the rapidly changing environment.

“Just 25 minutes away from the city you have an opportunity to build a new city that will be above sea level. So all of these new things; the innovation village, the agricultural drive that we’re moving ahead on, all these things require a different scale of operation.”

To support this, the Head of State also announced that his Government will be examining the opportunities for land surveyors to advance their education by allocating a number of scholarships to them annually.

“In terms of your own progression, or academic progression, definitely, we will be examining the opportunities out there.”

The President reminded that the profession brings with it a high degree of honesty and integrity while he urged the new surveyors to remember that their profession has the potential to impact the lives of generations.

Those who took the oath of office were administered their examination in December 2021; of the 31 candidates who sat the exam, five were successful.

After the ceremony, the Food and Agriculture Organisation of the United Nations handed over more than US$30,000 of land surveying equipment to the Guyana Technical Institute (GTI) to support its land surveyors’ programme.

Minister of Education, the Honourable Priya Manickchand; CEO of the Guyana Lands and Surveys Commission Mr Enrique Monize and other Government officials were also at the event.

New era of development on the horizon – President Ali