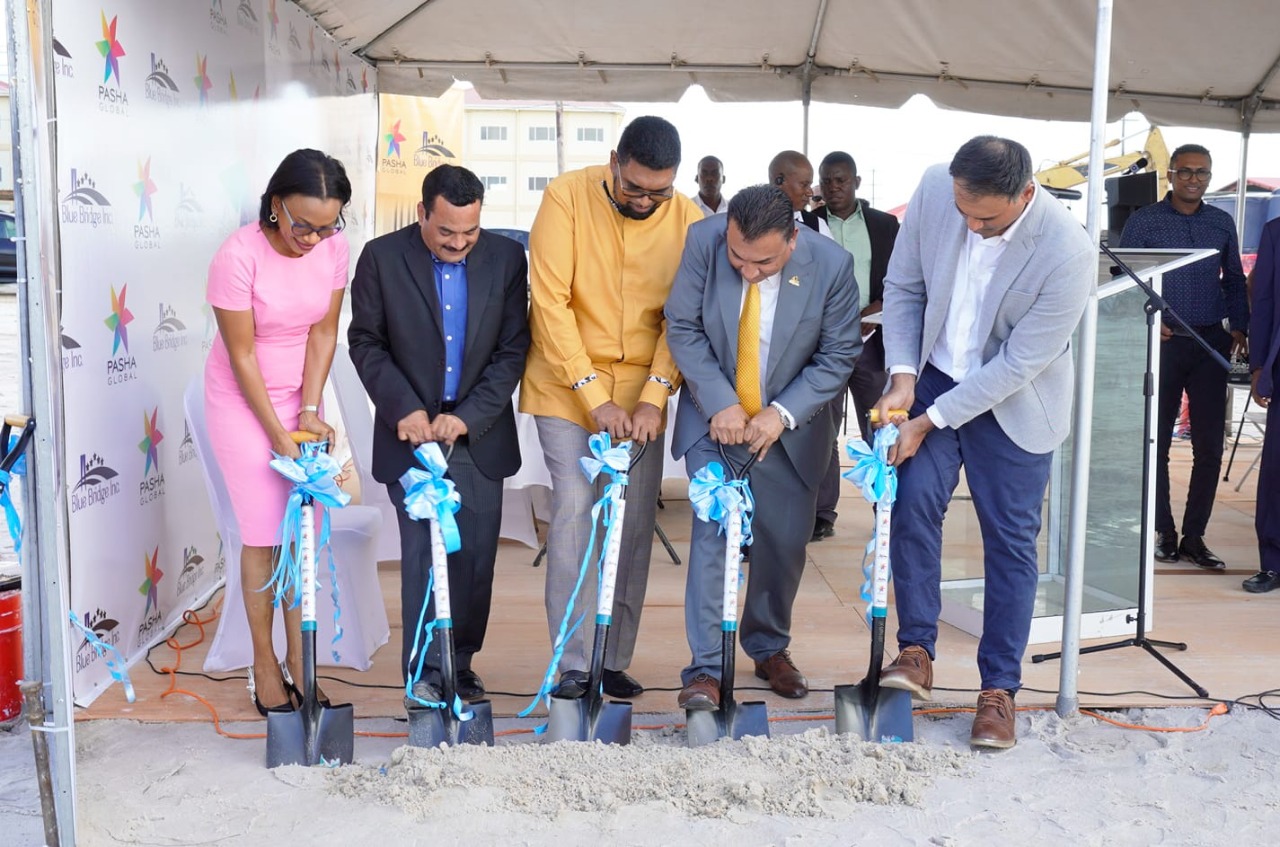 Georgetown, Guyana—(July 19, 2022) His Excellency Dr Irfaan Ali stated that his Government is committed to building the needed framework to support the massive investments underway in the country.

The Head of State made this statement on Monday while delivering the feature address at the sod-turning ceremonyfor the construction of the extravagant hotel by Pasha Global and Blue Bridge Inc. at Liliendaal.

“The country must be able to build an infrastructure to support the hotels not only from a corporate perspective that is executives coming in but from a broad mechanism, a broad platform that will support these investments.”

This, he added, must encompass human resource development, promote the reduction in the cost of energy, and create the right policies to make Guyana a destination of choice for financial services, among other crucial measures.

“We have to have the legal framework, the institutional framework to support this transformation.”

President Ali also pointed to the “multifaceted and integrated” nature of such a development. He said that so far in excess of 600 loads of sand have already been delivered to the site for preparation, which is an example of the “multiplier effect” that ignites the economy, creates demand, and ultimately creates jobs.

“That is a value of about G$210 million. That is just sand to prepare the site to get to this stage. If you multiply that by the number of drivers, the mechanics who service the trucks, the porters, the sandpit, the excavators that load the sand trucks, and the fuel pump that gives fuel to the truck to bring it here….When jobs are created, more money is available. When more money is available, there is a greater need for goods and services.”

The President assured that the Government is pursuing and will continue to pursue investors for several major initiatives, including the development of a world-class, one-of-a-kind eco-resort in Guyana. He said that the aim is to launch Guyana as a powerhouse and promote the country as a premier destination for wellness centres. This he added will also position Guyana as a health and educational hub for the Region and establish a one-of-a-kind Rainforest Safari Development.

He said too that there are also many global multinational companies who are looking at examining the country’s institutional systems to make Guyana their corporate headquarters for this Region.

“These are the things that excite us every day. It is not only the building of the roads and the health centres, and schools, and these things that are symbols of development. It is the hard work that goes on behind the scenes to create this environment that will push Guyana along a path that brings the prosperity that we’re talking about.”

The President also highlighted all the hotel construction underway and indicated their importance to the development of Guyana.

He congratulated the developers and urged those present to recognise that Guyana is at a very important time in its development.

What is required, he stressed, is focus, commitment, dedication, and full-scale national patriotic thinking.

“The Government cannot do this alone. We need all the stakeholders to brace forward with us as we advance the cause of Guyana…Let me wish the project team well. I hope the project is completed not only within budget and within time, but in an environment that remains safe because safety is important.”

Attorney General and Minister of Legal Affairs, the Honourable Anil Nandlall; the Minister of Tourism, Industry and Commerce, the Honourable OneidgeWalrond and the Guyana Office for Investment (GO-Invest ) CEO, Dr Peter Ramsaroop were also at the event.