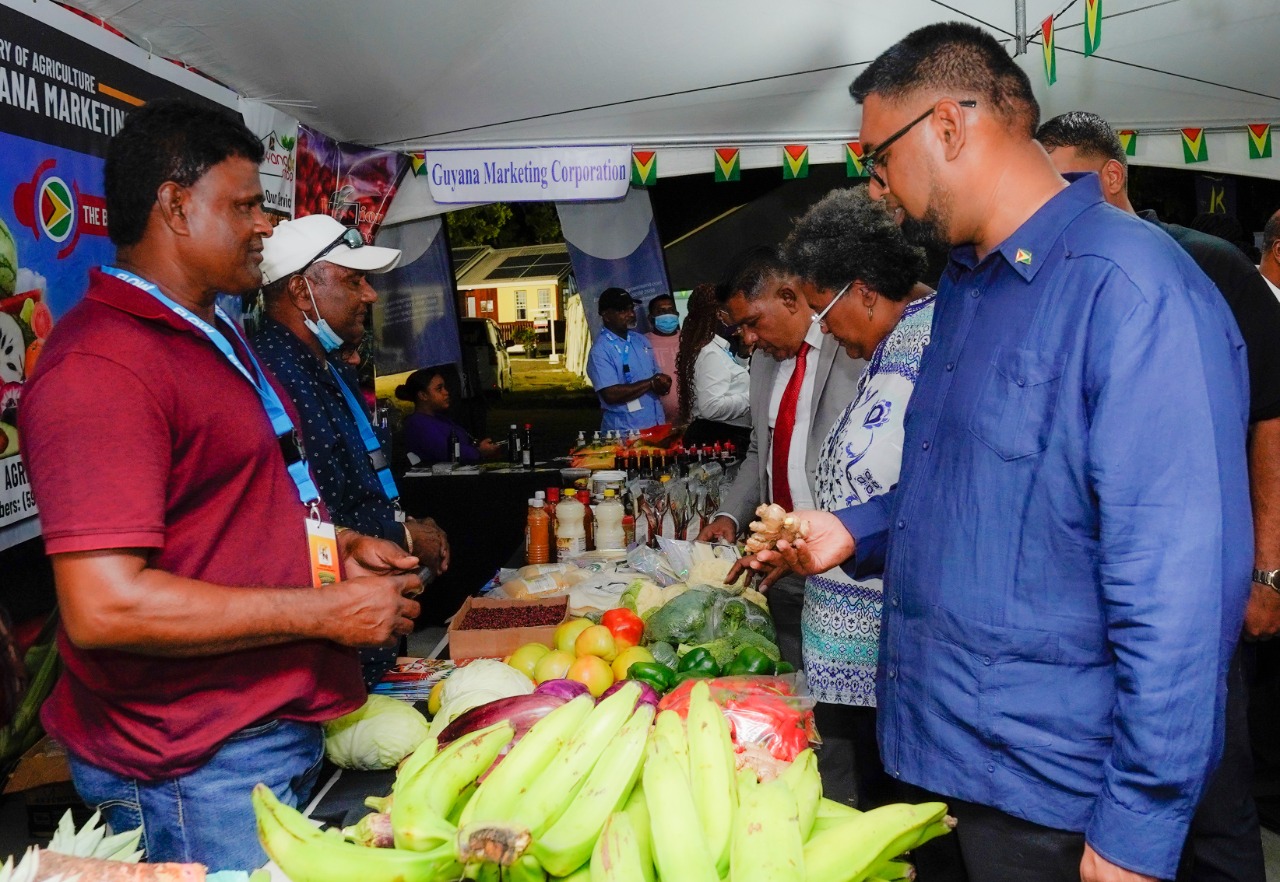 Georgetown, Guyana—(May 30, 2022) His Excellency Dr Irfaan Ali said that the growing relationship between Guyana and Barbados is aimed at ensuring that both countries prosper economically.

This, the President added, is evident by the expanded Black Belly Sheep Initiative between the two countries that will see land in Guyana being allocated to selective groups in Guyana and youths from Barbados to boost production.

He made the disclosure during the opening ceremony of Barbados’s Agro Fest 2022 that was held over the weekend under the theme—‘Greening Together—Ah Caribbean thing’.

“We are not looking at winning in one area or creating a situation where we are carving out an area for you(Barbados) and an area for Guyana. That is not what we want. We want a holistic approach to this relationship with this development so that we can create economic prosperity in every sector and in everything that we do together as one country—Guyana and Barbados.”

The President said that the economic expansion and cooperation between the countries must be built on a platform of respect and fairness.

He noted that cooperation has improved at the Government and Cabinet levels and also at the level of theprivate sector and technical staff.

These people-to-people partnerships, he stated, are what will “cement this relationship going forward.”

President Ali pointed to the areas of cooperation between Guyana and Barbados, including agriculture, and noted that the Black Belly Sheep Initiative launched in late March will now be expanded.

The President added that the farms will be working together in an integrated way to supply the market in Barbados. “We are working on training your butchers here so that they can do the best cuts, and Barbados can work on creating that logistics hub of moving these products on along the market chain. These are the types of initiatives that will…create a long-term sustainable relationship to what we are advancing and the path we are taking.”

President Ali noted that the model that Barbados and Guyana are building can be replicated for success across the entire Region to create a “win-win scenario and position for all of us”.

For this to work efficiently and effectively, he said, countries in the Region cannot see themselves as competitors.

“We have to see ourselves as a singular collective, a singular partner working together for one common goal and vision, that is, to give the best possible opportunity to the people of our country, to bring prosperity to the people of our country, to put food on the tables of our people in this Region at a less cost—at a sustainable cost and in a much healthier fashion.”

Prime Minister of the Republic of Barbados, the Honourable Mia Amor Mottley, who also made remarks at the opening ceremony, lauded President Ali for his commitment to the Region, especially as it relates to advancing its vision of reducing the food importation bill by 25% by 2025.

“President Ali, you could quite easily have said you were busy. Your presence in Barbados at this first Agro Fest after two years represents your absolute commitment to the Region and to ensuring that this project of food security in the Caribbean is something that you are not simply writing out on paper or making speeches from Georgetown on, but your presence here will motivate our people in understanding that there is a train that has left the station, and that train is the Caribbean Food Security Station, and its captain is Irfaan Ali. I know that you are on a cricket ground. I know that you are a cricket fan. And I have every confidence that when this part of our history is written, that you will have scored a triple century.”

Both President Ali and Minister of Agriculture, the Honourable Zulfikar Mustapha, were also praised for moving with “lightning speed” over the course of the last 18 months.

Prime Minister Mottley added that the Guyanese Government has worked hard to “put this Region in a position where we not only endorsed the plan in March in Belize at the CARICOM Heads of Government meeting, but we were able to then meet in Guyana last week in perhaps one of the largest agricultural investment forum ever to be held in this Caribbean region in the post-independence era”.

Minister of Tourism, Industry and Commerce, the Honourable Oneidge Walrond; Minister Mustapha and other representatives of the Government and Guyana’s private sector also attended the event.