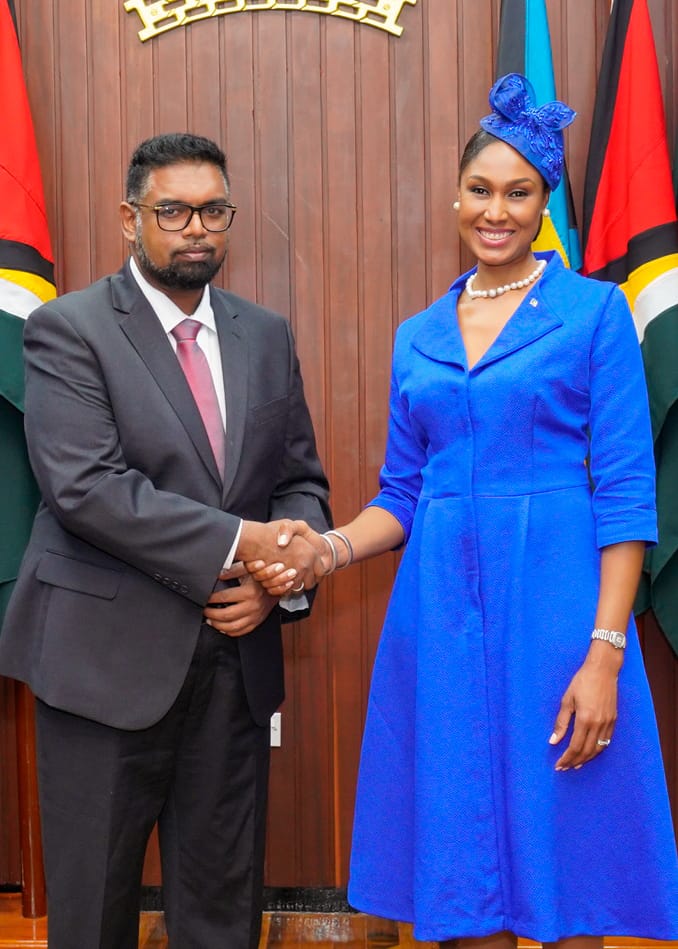 Georgetown, Guyana—(May 16, 2022) His Excellency Dr Irfaan Ali said that the opportunity is before Guyana and the Commonwealth of The Bahamas to forge a stronger partnership.

President Ali also told the Non-Resident High Commissioner of The Bahamas— Her Excellency LesliaMiller-Brice during her swearing-in ceremony that a stronger relationship between the two states could enhance sectors such as agriculture, tourism, education, sport, youth development, financial services and trade and investment.

The President said that as the 50th anniversary of bilateral relations between the two countries near its mark, “the opportunity is therefore before us to craft a stronger partnership and a programme for bilateral collaboration and cooperation”.

He said that it is his hope that the two countries can intensify cooperation during the High Commissioner’s tenure, particularly given the people-to-people links that exist.

“I know that there is a significant Guyanese population in the Bahamas. We must therefore work on establishing a functional cooperation programme that will rebound to the benefit of both our peoples.”

The Head of State also noted that he is looking forward to welcoming the Bahamas’ Deputy Prime Minister and Minister of Tourism, Investments and Aviation, the Honourable Chester Cooper, who will be leading a Bahamian delegation to attend this week’s Agri-Investment Forum and Expo.

To this end, the President said he hopes that with the participation and support of CARICOM Member States, including The Bahamas, development partners and the private sector, concrete solutions to improve regional food security and increase the intraregional trade in food commodities and products will be formed.

During her address to the President, the High Commissioner also said that The Bahamas is looking forward to collaborating at the technical level towards reducing its exorbitant food import bill by strengthening its agricultural sector through expanded production and increased capacity.

“We look forward to engaging in constructive discussions to expand our technological experience and increase our knowledge base and agricultural fields for food security, rural development and sustainable development,” the High Commissioner said.

President Ali emphasised that Guyana has not only demonstrated its leadership in words but in actions in the fight against climate change. This, he said, is testament to the fact that although Guyana’s current standing forest is worth over US$500b, the country has not made any moves to cut down “this important global asset”.

“As a matter of fact, we are known to have the lungs of the world and not only are we committing to keep it standing, we are committed to expanding the conversation methods.”

The High Commissioner also noted that The Bahamas is an archipelago country with vulnerable low-lying coastal areas, and it continues to be threatened by the adverse effects of climate change.

“My Prime Minister has made repeated calls for immediate action by the world’s largest polluters. It is the Bahamas’ view that more needs to be done in this area, as doing nothing can no longer be an option,” she said while also thanking Guyana for its support and solidarity extended to The Bahamas following the passage and destruction of Hurricane Dorian in 2019.

President Ali reaffirmed that it is “paramount that the region presses ahead with its advocacy for action by the largest greenhouse gas emitters and for change to the global financial architecture that takes into account Caribbean vulnerabilities”.