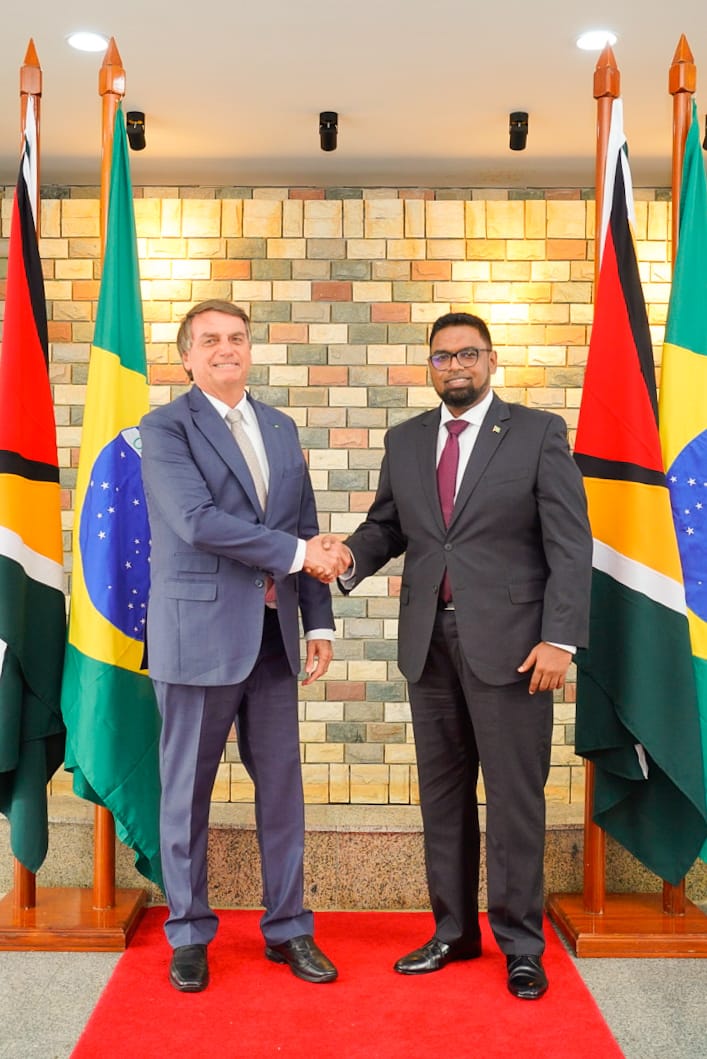 Georgetown, Guyana – (May 6, 2022) His Excellency Dr Irfaan Ali announced that Guyana and Brazil have agreed on an “actionable framework” in the areas of food security, energy, infrastructure and national security.

This announcement was made following a meeting between Brazil’s President, His Excellency Jair Bolsonaro, members of his cabinet and the Guyana Government today at the Arthur Chung Conference Centre.

The one-day visit by the Brazilian Head of State was a follow-up to a meeting held earlier this year between Presidents Ali, Bolsonaro and Surinamese President Chandrikapersad Santokhi in Paramaribo.

“We had the opportunity today, to further elaborate and concretise an action plan moving forward in four areas.”

The Guyanese President noted that discussions also centred on ways to better collaborate in energy, energy security, national security and defence and infrastructure.

“Those were the areas in which we had extensive discussions.”

President Ali explained that in terms of infrastructure, the focus is on an integrated project that involves a deepwaterport, the road-rail link, fibre optic connectivity, the development of an energy corridor, the creation of a free zone and the linkage of natural resource development to this project.

“So we’re not only talking about the deepwater port in isolation of these things, it is now one integrated project that we are looking at, and we have agreed to establish a team that will comprise of investors, the Federal Government of Brazil, the Government of Guyana and the State of Roraima.”

The President said that emphasis will be placed on moving the project forward.

In connection to the road link between Georgetown and Bonfim (Brazil), he noted that systems are already in place to build the stretch between Linden and Mabura Hill, while the two countries will continue discussions on the remainder of the road (Mabura Hill to Lethem).

He disclosed too that the two sides discussed working together on the natural gas strategy, the potential of hydro renewable energy and to examine this in a holistic frame in terms of energy production and oil and gas.

The President added that the Governments also discussed security and defence hardware-software technology, which includes intelligence sharing, as a master plan to support the security architecture of both countries and their shared responsibilities and shared challenges.  He said they also looked “at ways in which we can deploy technology and a joint approach in securing our borders”.

In the area of agriculture and food security, President Ali noted that Guyana and Brazil were looking to enhance their collaborations. He said that the countries are expected to work out an aggressive plan for the expansion of their markets, the removal of barriers, deploying new technologies, the process flow, institutional arrangements, creating a hub for processing and transhipment of Agri-produce and products to the rest of CARICOM with Guyana becoming a hub.

Agriculture, he emphasised, is a major area that Guyana is pursuing.

“All of this is linked intricately to our trade arrangements. So, we have been able to frankly discuss these issues and work out the mechanism through which all of these areas will advance.”

In his remarks, President Bolsonaro said the discussions were “fruitful and productive “. He added that the talks were straightforward with both parties working “towards solutions”.

He expressed confidence that the engagements were promising for both countries and their futures.

Along with the actionable framework, the two countries also signed treaties on International Legal Cooperation in Civil Matters and Mutual Legal Assistance in Criminal Matters.

The Brazilian delegation included several government ministers and members of the private sector.