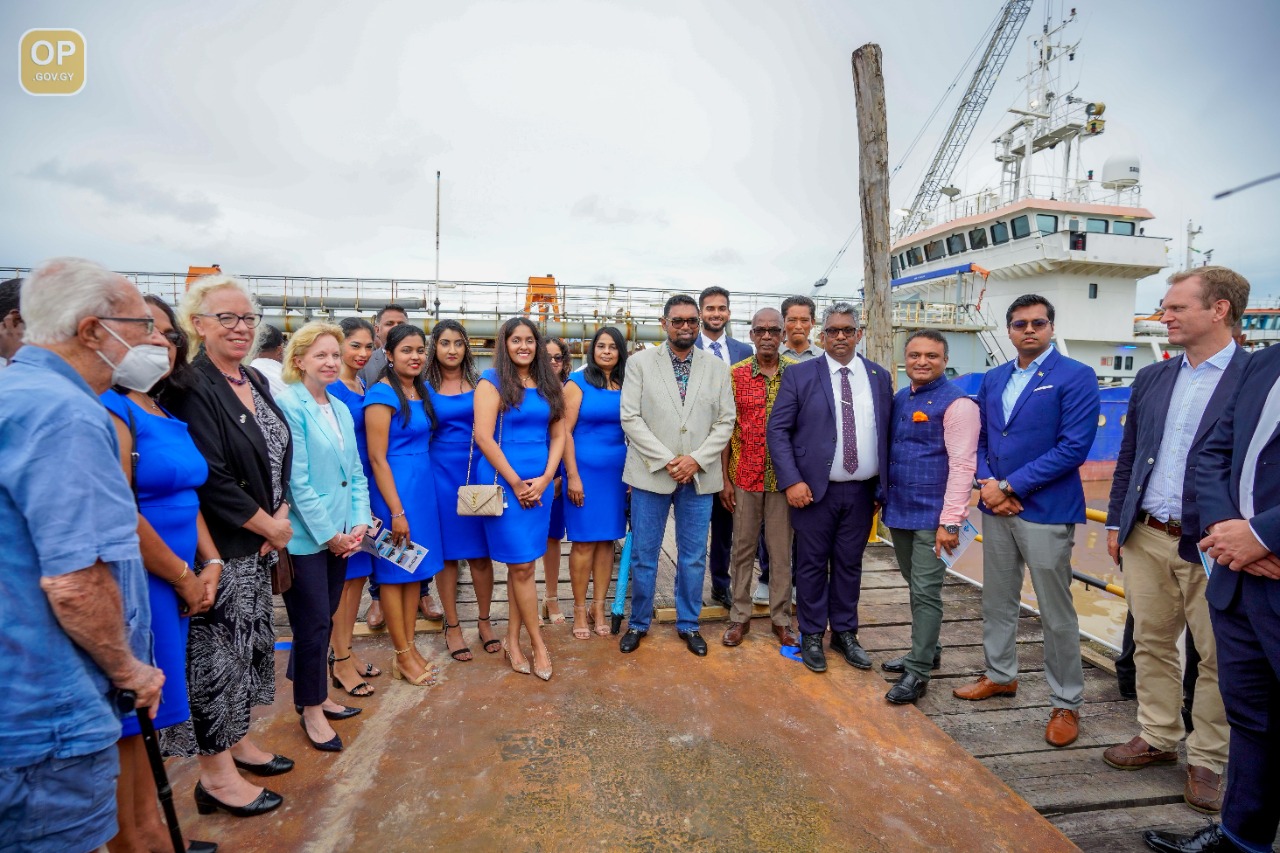 Nismes, West Bank Demerara—(April 23, 2022) His Excellency Dr Irfaan Ali said that it is imperative that new investments in the country conform to international standards.

The Head of State made this assertion during his feature address at the commissioning of the ‘Malavi’, GAICO’s new addition to their dredge fleet at Nismes, on the West Bank Demerara.

He emphasised that focus should be placed on not only building international capacity but also satisfying local demand. This, he said, requires certification, standards, an understanding of the rules, and “doing things within a framework for international convention and international laws”. These core principles, the President added, should guide those looking to build international companies.

“The days of doing an operation and trying to avoid taxes and avoid declarations are far, far, far over. If you really want to build an international company, these are not things that you should shy away from. These are not conversations we have to shy away from.”

The “new world”, he said, requires every company as well as every government agency to understand and operate within that framework, which is also a fundamental imperative for a company’s own growth and capacity building.

In addition to this massive investment, President Ali said that Region Three is undergoing rapid development; this includes the construction of a new four-lane highway from Schoonard to Crane on the West Coast of Demerara and the gas to shore pipeline, which will create hundreds of jobs and catalyse development.

“These are the types of development that will support what we want to do. And all of that will come under the Wales Development Authority.”

The President announced the addition of a second docking facility in the Region by the end of the year. This facility, he said, will add capacity and address the existing challenges faced by the increase in supply boats and vessels which require such services.

On this note, President Ali pointed to the significance of the investment by GAICO.

“So, I want to say that we don’t only look at this as a singular piece of investment. From the perspective of the government, we understand the nature of the investment, the importance of the investment to the other sectors and to the realisation of the different goals and targets that we want to achieve as a country.”

The Head of State also noted the integral linkages that will be made and the benefits to transport and logistics, giventhat the river has a one-way channel.  He emphasised thatthe Demerara River’s current draught “limits the country’s competitiveness.”

President Ali also acknowledged the benefits which will resound to local companies due to the maintenance cost of the vessel.

“It is adding new capacity to our economy, adding new capacity to our country, diversifying the breadth of service that we can provide right here in Guyana, and one may say, how is it linked to other opportunities? Based on what I’m told, the annual maintenance costs for this vessel, thissingular vessel, will be around G$40 million dollars. More than 70% of that G$40 million dollars will go to ordinary Guyanese in a machining shop, in a welding shop, in a fabrication shop. That is an added value that is one piece of asset brings.”

The Head of State reminded that Guyana is embarking on an impressive development agenda that will lead to the prosperity of all of its citizens.

The President said that the country must play a greater role internationally and must reposition itself regionally.