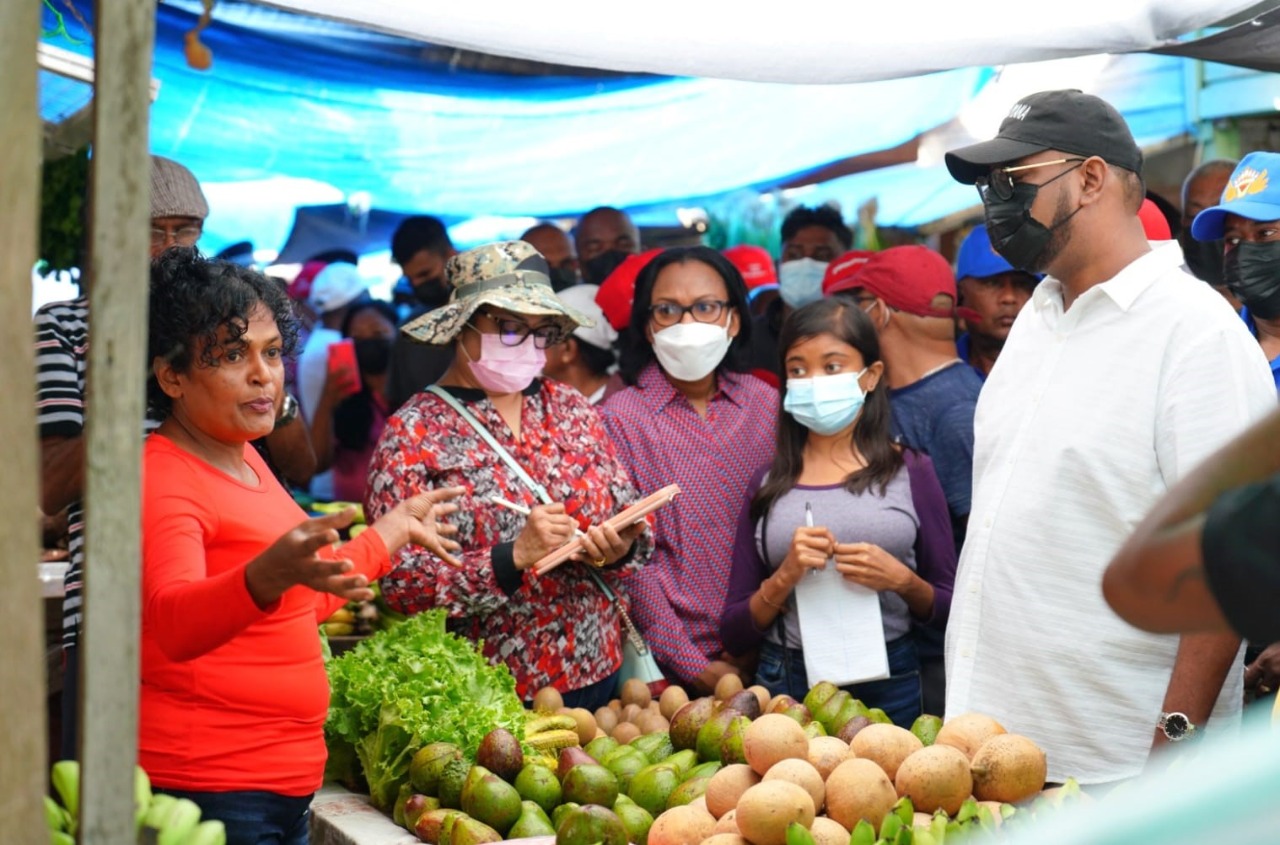 —Says illegal vendors will be asked to move into refurbished market

Parika, East Bank Essequibo—(April 10, 2022) His Excellency Dr Irfaan Ali said that the Government will be expanding and enhancing the Parika Market to create a more conducive environment for vendors to ply their trade.

The upgrade to the market, he added, also aims to end illegal vending along the roadways as Government will ask all vendors to move into the new and upgraded facility.

The President made this statement after an interactive session with vendors and patrons at the Parika Market today.

President Ali said that he was able to identify a few issues from his walkabout at the market, including needed infrastructural development.

This, he said, has resulted in the Government thinking about ways of enhancing the infrastructure to make it appealing for patrons to shop and for vendors to ply their trade.

“We will expand the tarmac; we will look at putting in the canopy—the walkway canopy, and then we will also look at enhancing the facility….”

The President reassured the vendors that the Government will make the necessary investments for the upgrades and expansion.

The President also noted that the Senior Minister within the Office of the President with responsibility for Finance, the Honourable Dr Ashni Singh, will see what additional resources will be needed “and then we have to move forward, but definitely, something has to be done.”

The Head of State also noted that following his visit and interactions with the vendors, especially those along the roadside, he is left with the impression that “there is a mood and a willingness” to move into the market.

The President explained that the consultations should be completed within two weeks. He is hoping that within six months, there will be physical and tangible progress because “it is a major issue. We cannot allow it to continue, and I’m not prepared to allow it to continue. All of us will have to embrace the decision.”

Another issue that was unearthed, the President said, surrounds revenue. He explained that the Market’s Management Committee, on a monthly basis, collects $1.2m on average but expends $1,127,000 on expenses (for staff payment, utilities and other services).

“Additionally, there is $10m of outstanding rent for the market. So I want people to understand this. So whilst the market management can do better and should do better, they are faced with this reality too.”

He said it is clear that the Market’s management does not have the capacity or capability to invest in infrastructural upgrades.

President Ali added that the market is a public service since people, in and out of Region Three, ply their trade there.

Prime Minister, Brigadier (Ret’d), the Honourable Mark Phillips, and other cabinet ministers and government and regional officials, also took part in the walkabout.

Today’s market visit is the second over the weekend, by the Head of State. On Saturday, he visited the Leonara Market, where he proposed building a huge tarmac for vending.